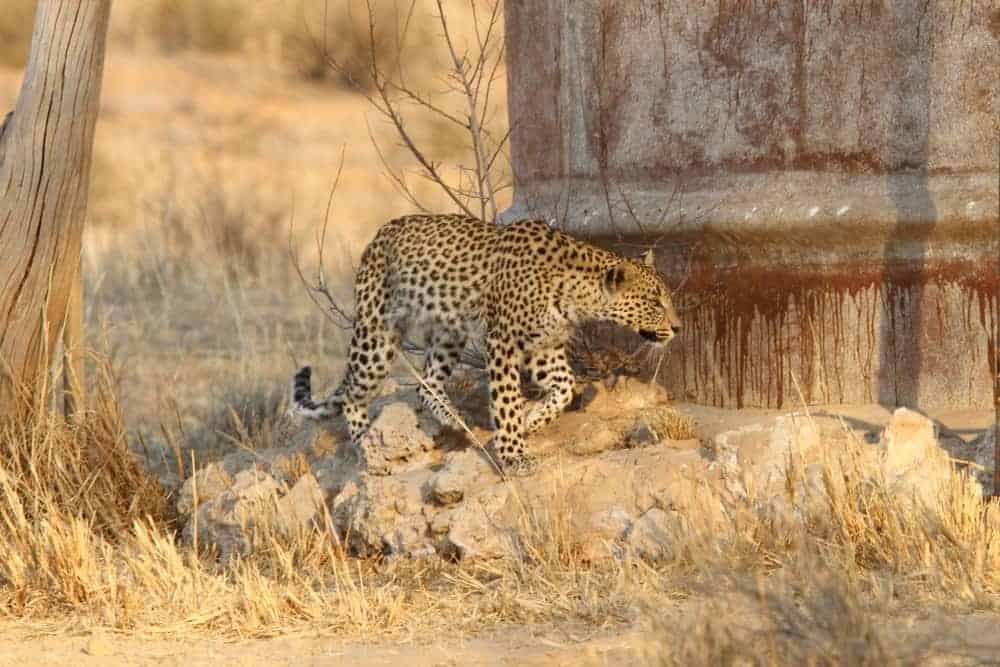 Leeudril is a waterhole situated along the dry Nossob river in the Kgalagadi Transfrontier Park. This 15,000sqmi Kalahari desert reserve straddles the South African and Botswana border regions and was created when two national parks were merged – these being South Africa’s Kalahari Gemsbok National Park and Botswana’s Gemsbok National Park. Kgalagadi means “place of thirst”, an apt name for this arid region of red sand dunes and dry savanna.

In addition, two fossil riverbeds are situated within the South African sector of the park, the Nossob and the Auob, and underground water flowing under these riverbeds results in lusher vegetation thus attracting herds of ungulates and their ever-present predators.

Several artificial waterholes have been placed along these riverbeds and are a magnet for wildlife, with Leeudril being one such location.

At 8am on Tuesday 30th August 2012, we arrived at Leeudril after leaving the nearby Tweerivieren camp and were thrilled to spot a young female Leopard next to the water tank. She circled around the tank a few times and chased some doves, before walking closer towards us and disappearing into a small copse of trees. After a few minutes she leapt out from the trees and headed straight for our parked vehicle, seeming very intent.

You can notice in the above images how the Leopard uses her eye-lids as hoods to protect her sensitive eyes from the bright sun as she sprinted towards us. She then spent half a minute silently poised behind our vehicle, and as I watched her in my side-view mirror I could see she was completely oblivious to human presence as she had something far more important in mind. She then paced across the road and positioned herself on the edge of a patch of taller grass. Only from this rear view could we fully appreciate what a slight, young cat she really was.

After about two minutes of absolute motionlessness, she suddenly leap vertically and dropped into the taller grass, the billow of dust that arose indicating that a struggle was taking place. We waited with bated breath wondering what would emerge from the obstructing grass, and after 3 minutes or so a very proud young Leopard appeared with a massive and freshly dead African Wild Cat in her jaws.

People are often surprised that large predators kill smaller species, but its actually a common phenomenon and I have previously seen a Leopard carrying a dead African Wild Cat at Punda Maria in Kruger National Park. Another example of this phenomenon can be found on the following Focusing on Wildlife blogpost: https://focusingonwildlife.com/news/an-afternoon-at-nebrownii-waterhole-etosha-national-park-namibia/
The killing of other predators eliminates competition for prey and at the same time also provides calories, so is doubly beneficial.

Our Leopard then proceeded to walk back towards the copse of trees from which she had emerged, obviously her place of safety. The Wild Cat was such a large individual that the Leopard actually struggled to walk normally whilst dragging it along. Finally when she arrived, she effortlessly scaled a tall tree and reappeared on an open horizontal branch where she proceeded to lick some blood from the Wild Cat’s puncture wounds.

This branch was obviously her dining room and remains of her previous meals, mostly dove and sandgrouse feathers, were in prominence (as can be seen in the above image). Her immaturity further evidenced itself when she started swatting her victim with typical catlike playfulness, and ended up knocking the Wild Cat out of the tree!The Leopard then descended and seemingly forgetting her recent conquest, she scampered out towards the waterhole itself. Her bloodied front right paw can be seen in the images.

At the waterhole, she posed for a few minutes in all her glory, rolled in the dust and then trotted back to the copse of trees.

Along the way she picked up two thorns in her back left footpad (these can be seen in the image below). Sitting down, she raised this leg and pulled them out using her teeth, after a few more paces, she then raised her front right leg and pulled out another thorn! Thereafter she dragged the African Wild Cat into the deep shade where she began to feed on her victim.

Its always special to locate and observe a Leopard, this most beautiful and stealthy of cats, but even more exciting to have been fortunate enough to have watched such incredible behavior.