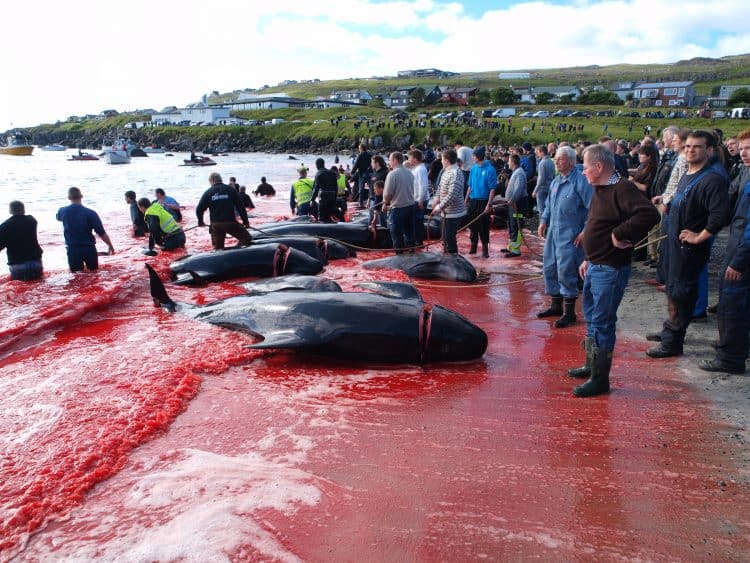 The Faroe Islands are a beautiful, remote archipelago between Iceland and Norway in the Atlantic Ocean. Nature lovers have been drawn to the scenic islands for years, known for their mountains, coastal cliffs, and abundant wildlife.

But these islands aren’t all magic. For centuries, the local community has participated in an annual whale hunt in which hundreds of whales are killed in drives every year.

During the hunt, known locally as thegrindadrápor the grind, whales and dolphins are trapped in a cove where they are brutally slaughtered by having hooks beaten into their blowholes and their spinal cords sliced.

Although there has been a global ban on commercial whaling since 1986 through the International Whaling Commission, some countries have found ways around this.

Japan continued their hunt for minke whales under the guise of scientific research before officially leaving the IWC last month, and a loophole in South Korea allows fisherman who “accidentally” catch whales to sell them legally.

Additionally, Taiji is home to an annual slaughter of dolphins because small whales, dolphins, and porpoises aren’t among those regulated by the IWC.

In the Faroe Islands, the hunts are technically legal because the meat from the deceased whales isn’t sold – but that doesn’t mean they aren’t immoral.

Almost 900 cetaceans were killed in 2018, and this year isn’t looking any more promising. In a Facebook post in May, Blue Planet Society estimated that around 500 cetaceans (including long-finned pilot whales and Atlantic white-sided dolphins) had been killed in the first five months of 2019 alone.

Over 300,000 people have signed Blue Planet Society’s online petition calling for a ban on the hunt of dolphins and whales in Japan and the Faroe Islands.

Several European and global organizations, including Sea Shepherd and the Whale and Dolphin Conservation Society, have criticized the hunts and launched campaigns against them, but the Faroese government has shown no signs that the grind will end.

This article was first published by OneGreenPlanet on 29 July 2019.