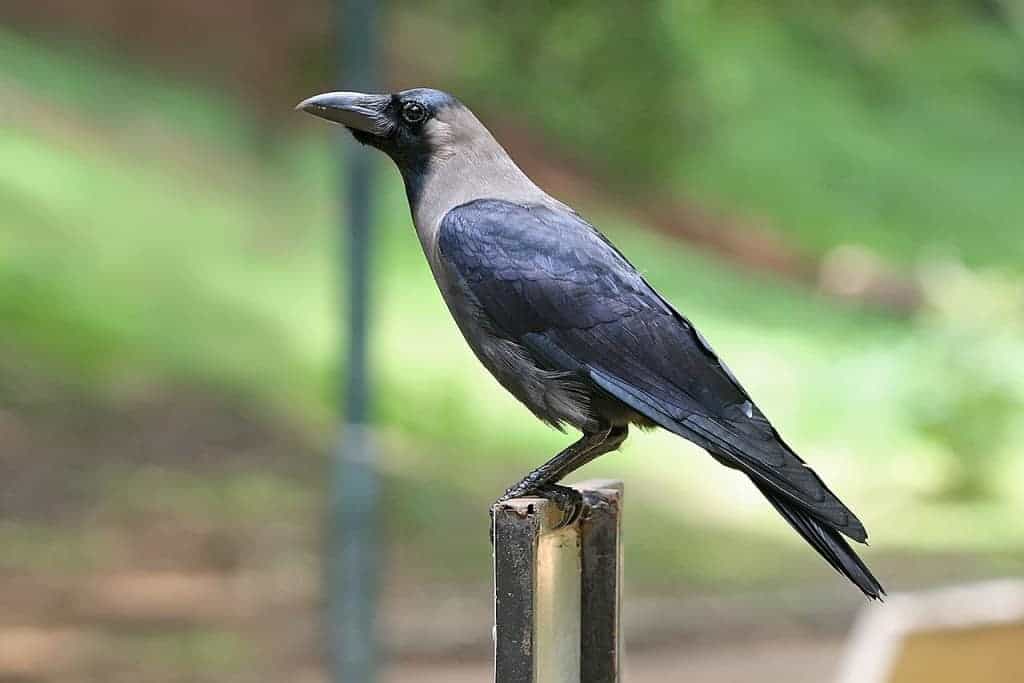 The House Crow (Corvus splendens), as it name suggests is a member of the crow family and is approximately 42–44 cm long (body and tail) and weighs 250–350 grams. Their plumage is glossy black, except for the nape, sides of the head, upper back and breast, which are grey and not glossy. Their bills, legs and feet are black, with males and females being similar, only males being slightly larger and they live for about 6 years in the wild. The species is a recent colonizer of Saudi Arabia, and has a native range extending through the Indian sub-continent from Sri Lanka north to Nepal, west to southern Iran and east to Yunnan in China.

The species has been introduced in a number of areas, including Jeddah, but has mainly arrived with the aid of ships or boats and the main strongholds are near ports along the coast. Birds appear more common along the Red Sea coast of Saudi Arabia than the Arabian Gulf coast, which may seem surprising as the areas from where it has spread are nearer to the Arabian Gulf coast. The reason for them being more common on the Red Sea coast of Saudi Arabia is probably due to the fact that the first recorded introduction of the species was in Aden (Yemen) in the 1840’s and the population there is a major source of ship assisted birds to elsewhere in the region. The problem for the House Crow is it is extremely adept at colonizing new areas and increasing its numbers drastically, and as such, is often regarded as a pest. The species diet is broad and highly opportunistic and they feed on many types of food including rubbish, but also eat native birds & their eggs, reptiles, small mammals, amphibians, fish and insects. The fact it has a liking for human waste means it also has a dependence on man and this fact has probably exacerbated its status as a pest. Adverse impacts associated with the species includes food theft, crop-raiding, fouling of human habitation and water supplies and a possible bird strike risk to aircraft. As far as I am aware there are no strongholds far inland yet in the Kingdom but it is only a matter of time before this happens.

The species is present in most countries of the Arabian Peninsula with a status as follows:-

Yemen – Resident breeder on the mainland. Birds were eradicated from Socotra Island in 2009.

Kuwait – Uncommon resident breeder, scarce at all times of year.

The consensus of opinion of the species is it is extremely detrimental to native bio-diversity when they invade from elsewhere and has the biggest impact on passerine birds. The largest populations in Saudi Arabia are in Jeddah, where numbers have increased rapidly since it was first recorded in 1978 with numbers now exceeding 70,000 individuals. Since 1986 a large population has developed in Yanbu, a port city 300 kilometres north of Jeddah. Further north still in Haql, a small town near the mouth of the Gulf of Aqaba, birds have been present since 1989. On the east coast of Saudi Arabia birds are most often seen at Dammam Port where at least forty birds are present. They first occurred in Ras Tanura, approximately 50 kilometres further North, in the 1980’s and became plentiful by the end of the decade, but an eradication scheme has decimated the numbers but did not eradicated them. A couple of pairs are present in the Dhahran area which is ten kilometres inland from the Arabian Gulf but there are no large numbers present at the moment. In most places House Crow numbers are linked to human population size, due simply to the expanding amount of rubbish generated. Nayari et al. (2006) suggest that Indian house crow populations are totally dependent on people and that non-dependent populations may no longer exist. Birds nest from March until August with preferred sites being trees, where they also communally roost. A program is now planned to cull 45% of the House Crow population in Jeddah as the bird has reached pest proportions. The removal of any alien species can be a long and costly exercise, not only in terms of finance but also man-power. It also normally takes the consensus of government to proceed. It is a matter of opinion as to whether House Crow is a pest and should be eradicated, but there is no such debate about its ability to colonize new areas rapidly and successfully.