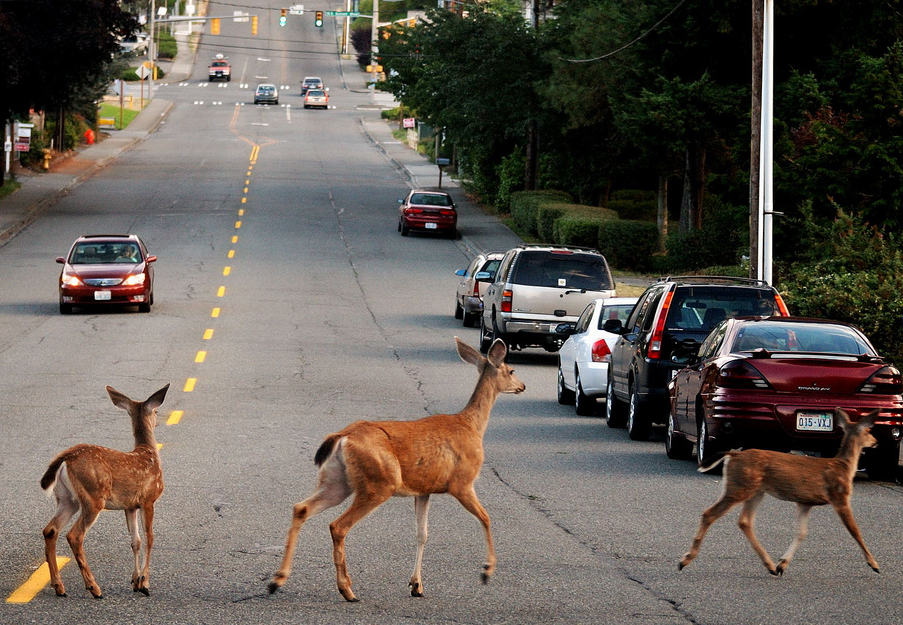 People, cars, and deer—put them together and you’ve got trouble. A rapidly urbanizing planet is transforming wild lands into habitat for humanity, and the non-human species living in these previously undeveloped areas must either adapt to the new landscape, find someplace else to live (not an easy task), or be erased from the biological census.

Deer are adaptable enough to have become a familiar urban species in many parts of the world. They haven’t radically changed their diets, as many urban species do, but they do exhibit a fair amount of behavioral flexibility. Their increasing populations are a testament to the advantages of living in close proximity to humans—plenty of food and water, warmer winter temperatures due to the urban heat island effect, and less threat from wolves, coyotes, lynx, bobcats, and bears, who’ve learned it’s much more hazardous and a lot more effort to dine on venison than to grab some fast food in the form of FiFi and Felix.

Deer aren’t the only ones injured or killed in these collisions—human drivers and passengers don’t always walk away unscathed. Initially, it seemed the problem was related primarily to mating season, referred to as rut in ruminant mammals such as deer. But as both human and deer population numbers grow in urban and suburban areas, accidents are occurring more frequently throughout the year rather than during a single season. Recent insurance company research suggests a decline in the number of deer-related accidents in the U.S., but it’s too soon to say if this is a long-term trend or a brief anomaly.

Meanwhile, Volvo is working to provide its cars with the ability to detect the presence of an animal on the road and even brake automatically if the driver fails to respond to an audible alert. Based on the company’s Pedestrian Detection system, which consists of both a radar sensor and an infra-red camera, one challenge is to recognize a hazard on the road ahead during the low light conditions of dusk and dawn, when the majority of these collisions occur. Volvo’s Pedestrian Detection system must also be modified to function at normal highway speeds in addition to the low speed conditions of city driving. Lastly, Volvo engineers must “teach” the system to recognize the many shapes and sizes of non-human animals. The company has initially focused on large animals, particularly deer, moose, and reindeer; these three hooved mammals accounted for over 47,000 accidents in Sweden alone during 2010.

Predators are by definition, obligate members of a community. Humans are not predators, but an introduced omnivore released by problematic developments such as firearms and fencing (barbed wire was invented in the US in the 1860s). Neither are motor vehicles predators, but mere introduced catastrophic events. Ungulates require predators and human hunting as replacement has increasingly been shown not to improve ecosystems, or animal populations, especially of large animals. CWD, for instance, an always fatal dysfunction of structural proteins (you know similar diseases in Europe as “Mad Cow” and CJD) slowly causes apoptosis, and unfortunately, the misfolded cell proteins are… Read more »

Thank, Ken. I’m glad to know you’re enjoying these posts. There’s a method to my madness regarding a focus on urban wildlife, and the reason I’ve made this both my vocation and my avocation. By helping others to realize there are non-human species that can be enjoyed close to home, I hope to take some of the pressure off of the “wild” places, where species with low tolerance for human presence tend to live. Also, I think we need to do what we can to make nature relevant to the daily lives of more human beings. Aside from improving their… Read more »

Kieran, your articles are refreshing in that they cover “urban” wildlife stories. I don’t think I’ve seen this “urban” slant anywhere else on the web. In this respect they’re really original, well-informed and packed with great images. Other species like raccoons, pigeons, foxes are also becoming “familiar urban species”.