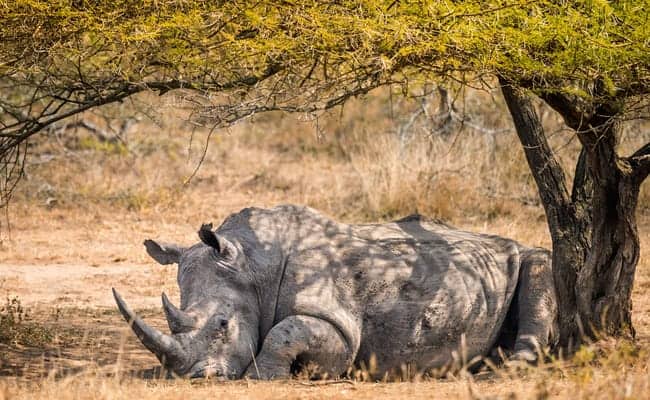 Too often, when poachers slaughter endangered and rare animals, they get away with their crimes. That’s why we’re calling on South African officials to prosecute a trio of poachers they have in custody as harshly as possible with this Care2 petition.

On 11/26, poachers killed three rhinos in Kruger National Park. The small bit of good news amidst this tragedy is that park rangers were able to apprehend three suspects, meaning these men are likely to be punished for their unconscionable crimes.

The arrested men have been identified as Xongani Mathebula, Emmanuel Mdhuli and Walter Mhangani. Originally, it was reported that the men were from outside of the country, but it turns out that two of them are locals, showing that the problem is not just perpetuated by outsiders but also South Africa’s own.

Convictions for poaching aren’t always easy to come by, but the authorities are fairly confident that their case is strong this time because of how the poachers were apprehended. Rangers were close enough when they heard the shots that they were able to catch up to the men – with weapons and rhino horns in their possession.

“I’m happy and satisfied that we will be able to at least link the horns that were found in their possession so the chances of these guys getting off are not very good,” said Frik Rossouw, the lead investigator for South African National Parks.

Prosecutors say they will also push to not allow the suspects to get out on bail. Since poachers are compensated fairly well for products that score huge amounts on the black market, they typically have the means to pay bail and evade justice.

South Africans are starting to take a firmer stand against poachers not just because of a compassion for animals, but because it has a negative impact on the nation’s economy. Safari tourism is a major industry for South Africa, with rhinoceroses being one of the animals visitors most want to see. If there aren’t sufficient rhinos for tourists to take a peek at, that cuts down on the number of visitors, and in turn the local employment numbers.

In some parts of Africa, animal caretakers have made the difficult and controversial decision to dehorn rhinoceroses in order to remove the incentive for poachers to kill these vulnerable creatures. Janine Raftopoulos, head of communications for South African National Parks explained why rangers haven’t pursued that option.

“Dehorning them in their natural habitat would simply be disabling them,” she said. “They need the horns to defend themselves against other wild predators. Besides, it has been acknowledged that poachers killed rhinos even when they did not have horns because they shot them from long distances.”

At this point, one of the best forms of deterrence available to South Africa is the full and aggressive prosecution of poachers. To protect rhinoceroses, the consequences need to outweigh the money people can make from poaching. Let’s make sure that South Africa makes an example of these three poachers caught murdering rhinoceroses by adding our names to this petition.

Poachers should be shot. No argument, no discussion. They are killing our heritage and preventing our children from enjoying the sights that we all take for granted.
We should applaud the African governments that are taking a firm stance at last.

There needs to be guards with guns 24 hours a day and shoot the scum on sight !

poachers should be poached into extinction!!!!

Time to end these horrors, justice must not be bribed or interferred with! The South African government and the justice system should hang their heads in shame!

I PERSONALLY WOULD SHOOT ALL POACHERS AND ALL GAME HUNTERS – NO HESITATION…..TO END THE LIVES OF SOME OF THE MOST WONDERFUL ANIMALS LEFT ON THE PLANET IS INEXCUSABLE ……..WE MUST GET RID OF ALL OF THE KILLERS ……..

Poachers are killers, they not only kill the animals but also kill the park guards. Please put them in jail. they are ruing the world. Why are they getting away with murder???

This is a huge problem and something every Country and Nation should become involved in. Here in the United states it would take a whole new Administration to expect any help.

EVIL lowlife scum. shoot them in the knee caps, let them feel the pain ! then lock them away !

ALL SHOULD BE SHOT ON SIGHT –

They know it is wrong. They have no conscience and deserve the harshest punishment which may send a big message to the poachers! Also I think each animal be guarded by a pit bull who can bark and alert the people on the reserve (and outfit the animals with a go-pro). We have to come up with something to stop these killers!

POACHERS AND TROPHY HUNTER’S DO NOT DESERVE ANY KIND OF SOFT JUSTICE – THEY NEED TO PROSECUTED TO THE FULLEST EXTENT OF THE LAW ESPECIALLY SINCE THEY KILLED WITHIN THE BOUNDARIES OF PROTECTED SOUTH AFRICAN RANGE PARK!

They deserve death by hanging. .