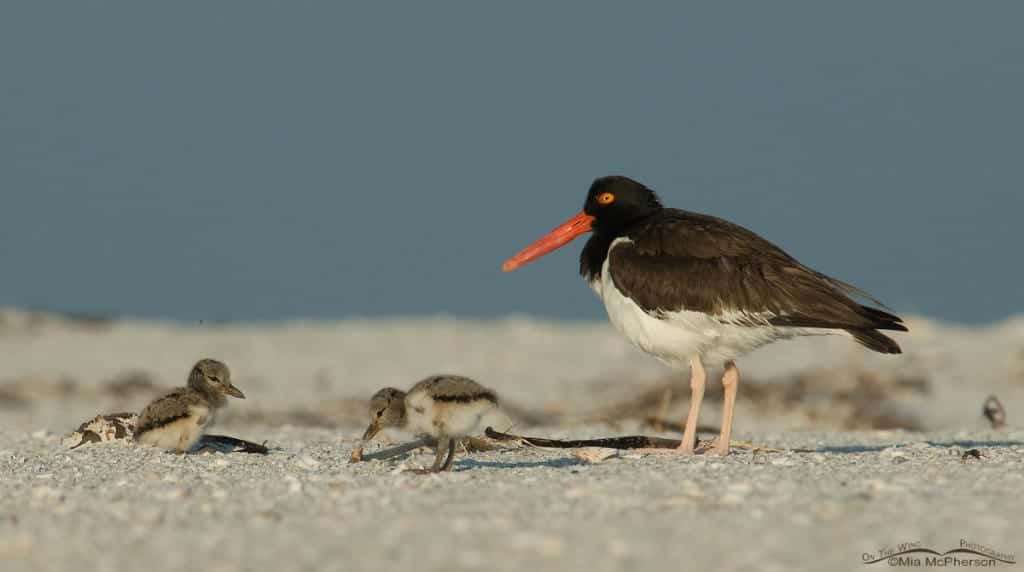 In 2008 I had the great pleasure of observing and photographing a family of American Oystercatchers from the day after the chicks hatched until three and a half months later. It is difficult to explain how amazing it feels to witness the growth of the chicks over a long period of time, I can tell you that I felt extremely privileged.

I have very strong ethics about nesting birdsand chick photography and gave these beauties a lot ofdistance between where they were located and where I laid down to photograph them.

This image represents 36% of the original frame which is far more than I normally crop but I would rather crop heavily and have the chicks small in the frame than to risk upsetting them or stressing the adults.

These chicks and the adult were relaxed because I didn’t intrude into their comfort zone and I also laid very still so that I wouldn’t startle them by making any sudden moves.

The young Oystercatchers rested and poked around in the sand while the adult preened and fluffed its feathers. I stayed just a few minutes with the birds and moved on.

The bills of the chicks are tiny compared to the adult’s bill and the coloration of the bill and their plumage blends in quite well with their surroundings.

A week later I found the Oystercatcher familyforaging on north beach very early in the morning, there was just enough light to capturea fewimages of them before they moved into the spartina marsh. This chick was on a mound of sand at the shoreline poking its bill into the wet sand.

Again, this is a large crop from the original frame. I stayed quite some distance from the young chicks and the adults that were close by.

Five days later the chicks are getting bigger, their bills and legs are longer and they ventured further away from the adults. Their bills are also more colorful. Feather shafts are visible on the wings. The chicks still need to be fed by the parents because their bills aren’t strong enough to open the bivalves that are their prey.

At twenty-one days old the bill and legs have gotten even longer and the chicks have gotten more adventurous. They wander further from the adults and appear very curious about what is food and what isn’t. The back and head plumage is darker.

At thirty-eight days old this Oystercatcher chick is almost the same size as the adult, the bill has gotten strong enough to pry open its prey and it can fly. I thought that about this time that the other chick had died because I wasn’t seeing it with the adults or its sibling but later found it much further down the beach feeding independently, perhapsit was the “rebel” fledgling.

By this time I could lay very still and the youngster would approach me so I didn’t have to crop as heavily.

At seventy-three days of age the immatureOystercatcherwas fairly independent but it still kept close to the adults. Its bill has just a few millimeters to grow until it is as large as its parents.

On day seventy-nine the young Oystercatcher was as large as the adult and was still staying with the adults. Its bill and eyeswere still darker than the parents which made it easier to identify the immature bird.

By day seventy-nine if I laid very still the Oystercatcher would approach me rather closely, here I had to zoom back to get the bird in focus. In this image I can see that the eye is getting lighter and will soon start to change to the lemony yellow color of the adults.

By day 103 the Oystercatcher chick spent most of its time foraging alone but the adults were often within sight. Except for the eye and bill color this young shorebird looked, sounded and acted like its parents.

Due to inclement weather and other obligations I wasn’t able to spend as much time looking for and photographing this bird after this date. I spotted it once again at what would have been day 122 and took a few images of it that I grossly over exposed so I am not sharing those (I only kept one to remind me of the date). On day 122 the young birds eyes were a dark yellow and the bill was losing the black tip.

I believe at about that time the adults may have chased the young bird out of their territory because I didn’t photograph it again.

Or did I? This adult Oystercatcher photographed in February of the next year might have been the bird I photographed the year before, it would be very difficult to tell. Or the bird may have picked a new territory nearby on Shell or Egmont Key.

I had such an amazing time watching that young bird grow up and felt I had been given a unique opportunity to follow its growth.

For more information on the ethics of photographing nesting birds or chicks: the Principles of Birding Ethics published by the American Birding Association. Also NANPA’s Ethical Practices(pdf)