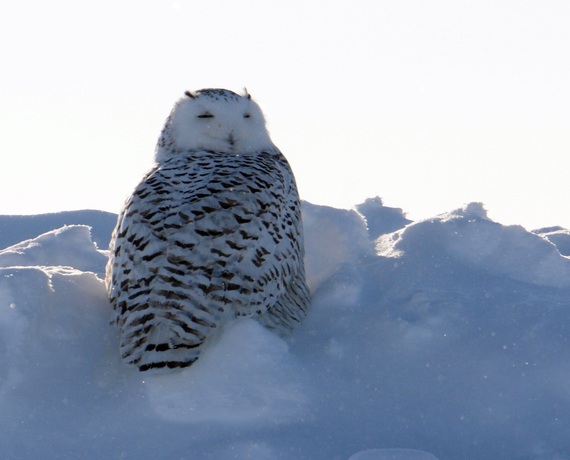 It’s that time of year. You better watch out! There is a dramatic movement from the Far North this winter coming from the land of reindeer and caribou. The whiteness of the character is its most striking feature. When it arrives, it often alights atop roofs and its uncharted movements have been known to disrupt airport traffic. When heard it is less of a “ho, ho, ho,”- more of a “Hoo, hoo, hoo.” It doesn’t care if we are naughty or nice.

It is the snowy owl, of course, and we are in the midst of a major irruption of them in the east. Such irruptions, which occur every couple of years in the lower 48, are generally due to low populations levels of its mainstay Arctic prey, lemmings — particularly the collared lemming.

I was among snowy owls in Arctic Alaska for a decade, during the summer months as we monitored breeding birds that migrate there from all over the world and worked with other groups to help protect key wildlife areas in western Arctic Alaska.

Most of those years, snowy owls were few. But two of those summers we had conspicuous population booms of lemmings and the snowy owls (along with short-eared owls, rough-legged hawks, northern harriers and pomarine jaegers) were much more numerous. Those avian predators — and mammalian predators like Arctic fox, red fox and ermines — conspicuously feasted on such abundance.

In those lemming peak years the nesting birds we monitored were more successful than in other years. Their nests were less likely to be attacked while their predators were so focused on the lemmings rather than bird eggs.

When lemming population cycles wane, there is disruption for the predators. The pomarine jaeger flies into the Arctic tundra from oceans worldwide, but unless it finds abundant brown lemmings, it returns to the pelagic world without breeding — and most years it doesn’t stay. When lemmings are few in the early winter, snowy owls, particularly young and female owls, head south.

The Arctic food chain for predatory birds and mammals is a deceptively simple one, dominated by two species of lemmings. Their relative absence is a strain for many species at the top of the world. The disruption causes the irruption.

New technology has broadened our understanding of the snowy owl in recent years. Satellite tracking has revealed them to be . . . a marine bird!

In winter, individual snowy owls have been tracked far out on the sea ice. There, among openings in the floes, they may be preying on marine birds, scavenging on seals killed by polar bears or even feeding on Arctic fish (John James Audubon recorded snowy owls feeding on fish in in northeast during the 1800s).

Our remotely triggered nest cameras found that snowy owls were a predator on shorebird eggs. Their movements and demonstrated versatility help explain how this owl copes with reductions in its main prey.

The irruption of Snowy Owls is the typical and most prevalent population response to the wanes in lemming abundance. Here in the lower 48, snowy owls seek out open, tundra-like environments (although, like Santa, they do occasionally land on suburban rooftops).

They are most often detected on open sandy beach along our coasts, in open plains of our heartland and, of course, around airports — the most tundra-like envions around our major cities — where they are increasingly in harm’s way.

So maybe they do care if we are naughty or nice. We are certainly creating a grim future for this bird tied to the Far North for the majority of its life. The Arctic is heating up at twice the rate of the rest of the warming world. Such warming is transforming the world of sea ice and permafrost, and disrupting the natural world of Arctic wildlife in many ways.

In some Arctic regions, lemming population cycles are being disrupted and lemming populations are collapsing, causing great disruption of snowy owl and other predator populations. As folklore demands, Santa will always have his North Pole. But for that other character flying south this time of year, the irruptive snowy owl, we better watch out.