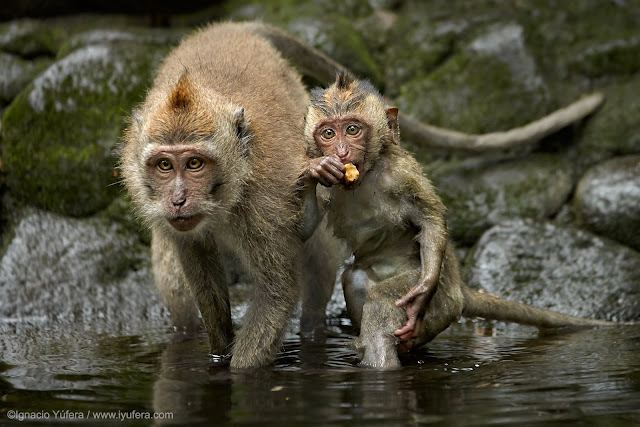 Receiving more than 15,000 visitors a month, and located in the middle of one of the most commercially saturated areas of Bali, Ubud’s Sacred Monkey Forest can be easily dismissed as just another tourist trap. However, an early morning visit before the crowds arrive can provide a surprisingly interesting wildlife experience, set in the unique atmosphere of Balinese hindu temples.

The forest complex belongs to the village of Padangtegal, which has been all but engulfed to become a suburb of Ubud, a bustling town of 30,000 that’s one of the main cultural and artistic centers of Bali, and a big tourist destination. The entrance, located at the end of the aptly named Monkey Forest Road, opens everyday at 8:00 am, for a 20,000 rupee fee (roughly US$2). It gives access to a 27-acre densely forested park with paved trails leading to the village’s pura dalem or death temple, a typical Balinese walled compound that contains the cemetery and the cremation area. A stream cuts through a small but scenic gorge, and is canalized to provide water to a small bathing temple, used for purification rituals.

Covered in moss and in places overgrown by the lush vegetation, the temples in the Forest look deceptively old; although it is known that the forest has been held sacred and contained some sort of religious site since the 15th Century, the structures that can be seen today are relatively recent. The volcanic rock widely used in Bali as building material is cheap and easily carved, but deteriorates quickly under the tropical climate and has to be renovated frequently. There are many interesting, often strangely unsettling sculptures around the temples and all over the forest, depicting both the benevolent and demonic forces central to Hindu beliefs.

The monkeys in the forest are Long-tailed (also know as Crab-eating) macaques, Macaca fascicularis. This is a widespread, mostly forest-dwelling species found in most of Southeast Asia, with as much as ten different subspecies showing considerable variation in color and size throughout their range. The ones in Bali belong to the nominate subspecies, M. f. fascicularis. Adaptable and resourceful, they thrive in degraded and humanized habitats as long as there are some trees left, and often live close to people. They often inhabit swamp and seashore forests and are very good swimmers, able to dive for crustaceans, clams and small fish.

The Balinese people have a mixed attitude towards macaques. In Hindu traditions they act as an ambivalent force, with both good and evil monkeys appearing in the Ramayana epic poem and other ancient lore. Here in the forest, where they are believed to keep evil spirits away from the temples, they are revered, pampered and fed; but as soon as they leave the sacred grounds and start raiding paddy fields and farms, they are considered vermin and dealt with accordingly.

Monkeys are fed in the early morning by the Forest staff, who are very smartly-dressed villagers from Padangtegal. Staff members seem to genuinely care about the monkeys’ well-being, they know individuals within the different troops, and will warn visitors if they feel they’re bothering them. They also keep the place and the temples spotless. 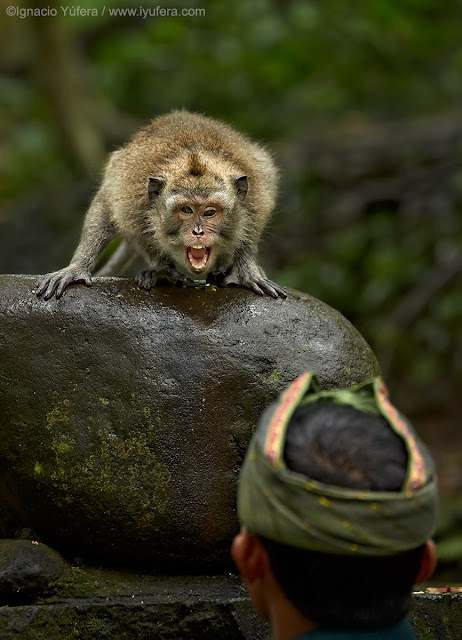 I saw the macaques being fed mostly sweet potato, which they seem to relish, as well as the proverbial bananas. Food is kept in locked cages overnight, and monkeys wait nearby to be fed in what seems an established and accepted routine. There are small stalls by the Forest’s entrance where visitors can buy bananas and peanuts to feed the monkeys; a few large, aggressive males wait by the trail and will attempt, often successfully, to rob tourists of all the food they’ve bought at once. Groups of smaller individuals gang up on visitors, grabbing anything they may considered edible or just fun to snatch from their backpacks. Stretching things a little, it all looks like a nice little racket, the food sellers teaming up with the rogue monkeys to rip off unwary tourists. Other than that, most macaques ignore people and mind their own business, providing a very nice opportunity to watch and photograph their behavior. 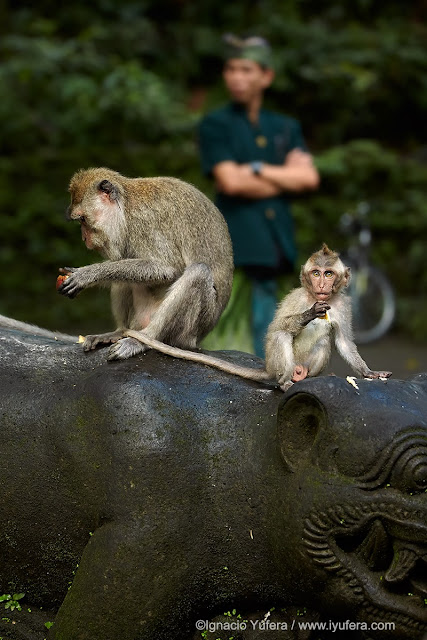 One thing that surprised me about Long-tailed macaques is how similar males and females look. Past a certain age, old males can get quite bulky and are easily distinguished, but in younger adults facial features are remarkably alike, both sexes having bushy beards and mustaches, and only the nipples give away non-breeding females. Personally I find them quite handsome (as far as macaques go), much better-looking than the famous and so-much photographed Japanese macaques. 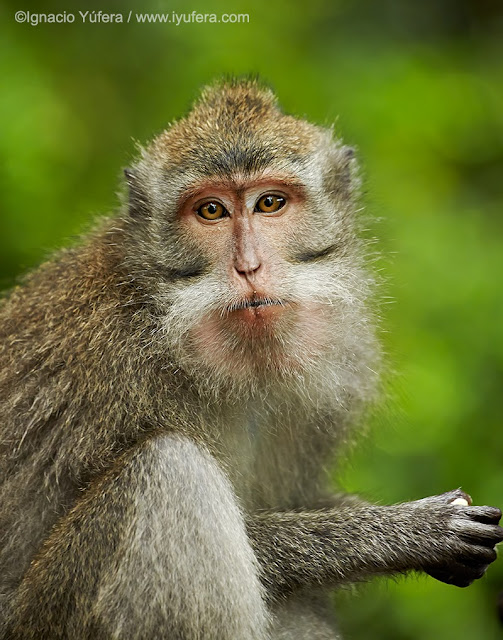 The macaques breed year-round, and females can be seen carrying young at different stages of growth. Like most macaques, they are born covered in black hair, which they keep until they are about 6 months old. After that, they have black in their heads only, and after their first year their color becomes similar to that of adults. Nursing lasts for an average 9 months, although the little ones start to forage on their own when they’re 3 months. Females become sexually mature between 3 and 5 years, but don’t attain full adult status within the troop until they give birth for the first time. Males reach maturity around their fifth year, and may grow to weight more than 12 kg. 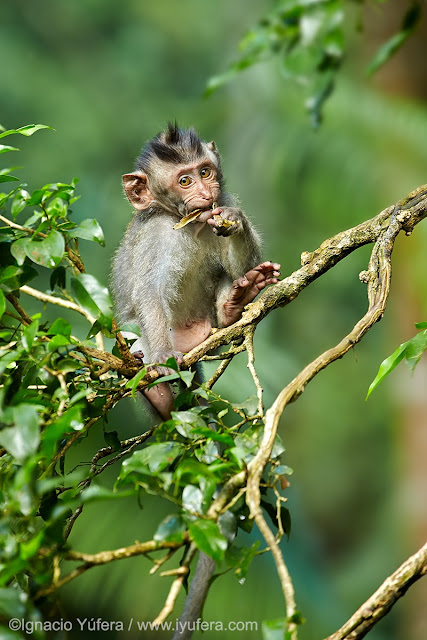 From a photographer’s point of view, it’s in the early morning when the forest and the macaques are at their best, but the tree cover is so thick that at that time light is very dim; almost all of these images were shot at ISO 1600. Later on, if it’s sunny the light becomes the usual nightmare inside a dense forest, with stark contrast between shade and light patches, and after 9:30 it’s almost impossible to shoot anything without getting a bunch of brightly dressed tourists in the background. However, the macaques are great photo subjects, especially mothers with their young, and their totally relaxed attitude towards people allows for some very nice images. Some of the best opportunities were provided by the macaques entering the water in the ponds and canals, searching for food bits but also apparently just for fun. Unfortunately, the dark conditions made it very difficult to capture movement. 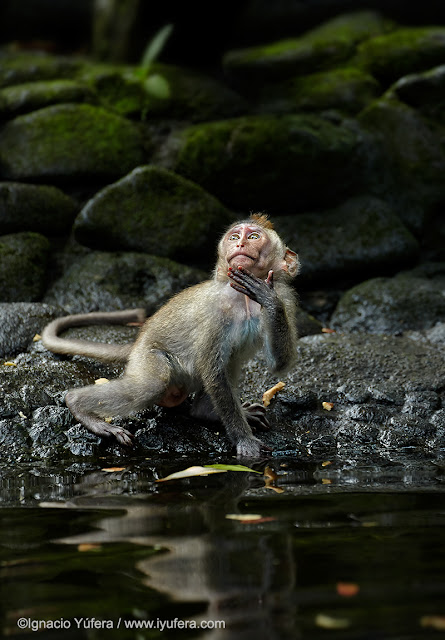 The temple buildings and the statues are interesting subjects by themselves, and they provide a great setting to photograph the macaques. Monkeys hang out all over the temples, where their presence is welcome and they feel totally at home. Watching them playing on the moss-covered walls reminds of Kipling’s Jungle Book episode in which Mowgli was kidnapped by the Bandar-log, although in the book monkeys were the bigger and stronger Hanuman langurs. 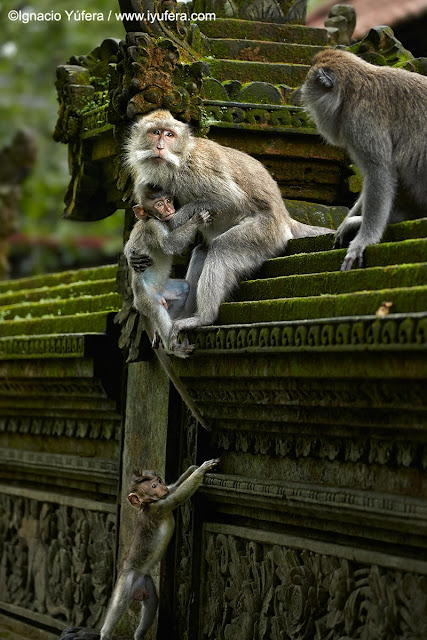 I haven’t been able to find any information about the management of the macaque population within the very limited space of the Forest, other than figures showing a steady increase in their numbers since 1986; small wonder, given the absence of predators and the constant supply of food. There are nowadays more than 600 macaques in the 27-acre Forest, divided into four matriarchal troops. Females tend stick to their native group all their lives, whereas males may wander between different units depending on their status and female availability. Although the species is territorial, the overabundance of food and the general ease of life in the Forest seem to make things more relaxed, and ranges overlap more than they would in a wilder place. Fights do occur, but apparently they’re rarely serious. 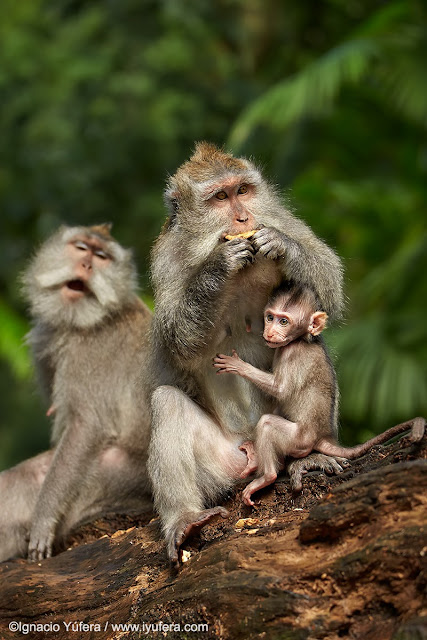 A few macaques can be seen wondering the nearby streets in Ubud, but they don’t seem to be a big problem, at least yet. In Singapore there are sterilization programs to prevent this species from becoming overabundant in the wildlife areas and parks; in other areas of SE Asia where their numbers become a threat to agriculture, they are simply trapped and shot. Long-tailed macaques have been the subject of an intense international traffic for biomedical research; an estimated 254,000 individuals were exported between 2004 and 2010, mostly between Indonesia and the USA. A marked decline is being detected throughout much of this species’ range, and although not currently considered threatened, its status is being reassessed by the IUCN.