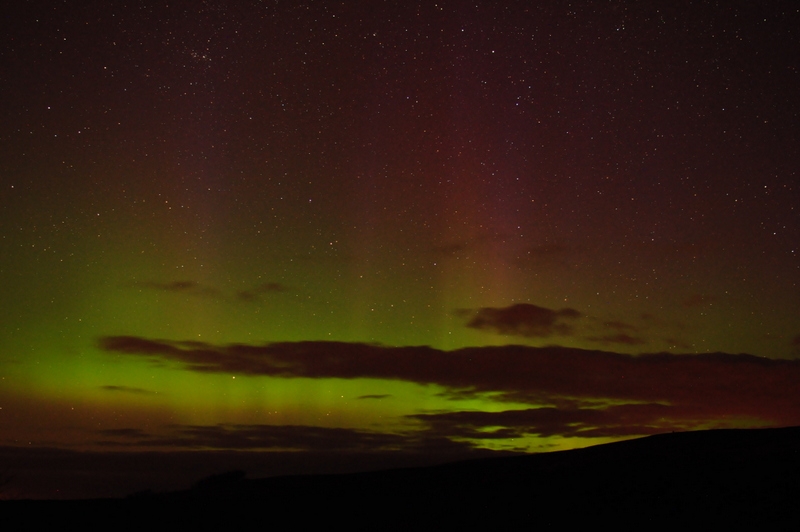 The autumn equinox has passed in the northern hemisphere at around the 21st September and at this timeearth’stwo hemispheres arereceiving12 hours of daylight and 12 of darkness. The name equinox comes from theLatinname aequus meaning equal and nox (night). The equality does not last for long as the darkness soon takes over here in the northern hemisphere which starts to provide the right conditions for the Aurora Borealis season.

There is an increased chance of the northern lights been visible further south this winter putting British skies in range for potentialspectacularshowings. The sun has a heartbeat and every 11 years or so it beats hard and this is known as the solar cycle which is measured by the amount of sunspots visible on the sun. Sunspots release solar energy into space and if these winds are attracted towards earth it creates aurora activity.

For 400 years since the time of Galileo, scientists have been keeping track of the number of these sunspots and the graph shows that the cycle seems to be predictable. The solar cycle is now on the rise with the solar max predicted 2013-2014 which means eyes in the skies this winter time for an increased chance of seeing one of the greatest spectacles on the planet.

My own dreams came true of seeing British Aurora earlier this year when I was back home in Cumbria for a few days andreceivedreports on my phone of ‘storm level’ aurora activity on the evening and with theingredientsperfect for observing the night sky with little cloud cover and also a new moon creating very little unwanted light. This along with my self been fortunate to live in an area with minimum lightpollution, as well as little interfering light when observing to the north. I was joined by two of my good friends Andy and Danny as we watched the amazing spectacle as the strength of the solar winds peaked at 2am reaching 7 Kilopascals, which is a unit for measuring air pressure worldwide.Here is the full strory that made the Cumbrian papers.

The residents of the island of Coll, an inner Hebridean island are trying to extend their tourism season by applying for Coll to become the first ‘dark sky’ island. The low lying island exposed to the west gets among the most clear skies in the country and with very little lightpollutionand nothing but ocean and a few remote islands to the north it provides aperfectviewingpoint to watch the night skies and all they have to offer. If designated as a dark sky site it would joinGalloway’sForest park with therecognitionandhopefullyencourage people to visit in the winter months and get rewarded with some astronomical wonders….

Its safe to say that I am not going to bother with bonfire night this year. Spacephysicists are trying to build a database of the best sites in the UK for watching the northern lights. Lancaster University’s Aurorawatch team have collated a number of sites with help from the public to try and encourage people to go out and try and see activity for them selves.

Here is the linkto some good locations for Auroral photography and viewing -Link. Two good links for monitoring geomagnetic activity areAuroraWatch UKandSpaceweather. If all the rightingredientsare in place then the last two things needed are commitment and persistence to get rewarded with a sight that you will never forget. And one of the best things about this natural spectacle is that no one can take it away from you!