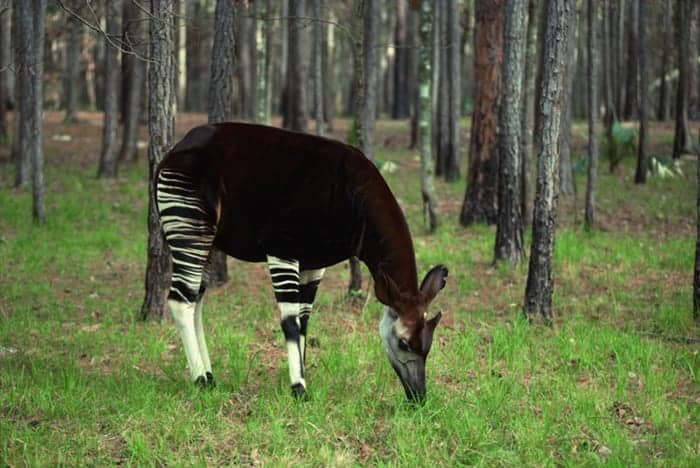 Following the attack on Sunday morning by mai mai rebels on the Institute in the Congo for Conservation of Nature (ICCN) headquarters and Okapi Conservation Project base of operations in Epulu it was 48 hours later on Tuesday morning when the Congolese Army (FARDC) and Monusco (UN) troops finally took control of the area around the town of Epulu.

Security is being extended along the road in order to allow residents to return to their homes in Epulu. The tragic outcome of the attack on the Epulu Station and Okapi Wildlife Reserve Headquarters has now been verified by ICCN and OCP personnel on site in Epulu. The destruction rendered by the rebels is far worse than anyone could have imagined.

Casualties and damage from the attack include:
-6 people were killed – 2 ICCN rangers, the wife of one of the rangers, an immigration worker, and 2 residents of Epulu.
-13 okapi were killed and one injured.
-All ICCN buildings were damaged or burned.
-All OCP buildings and offices damaged or burned.
-Motorized equipment stolen, damaged.
-All food stores looted and storage containers destroyed.
-All computers and printers stolen or burned.
-Satellite phones stolen.
-All medical supplies taken from Dispensary.
-Shops and homes in the town of Epulu were looted and damaged.

The destruction of ICCN and OCP facilities is extensive and there seems to be not one thing of value left. There is no food left in town so there nothing to eat for those coming out of the forest. We are feeding the families that escaped to Mambassa until they can go back to Epulu. There is a meeting today of our staff in Mambassa to organize supplies and basic shelter needs to take with them when they return to Epulu. The OCP will be sending funds to DR Congo to finance the purchase of food, supplies and medicines so that ICCN and OCP staff can set up a base of operations in Epulu.

There are no words to describe the loss of the okapi at the station, some of which have been in residence for over 23 years and all made it through seven years of civil war unscathed. They were ambassadors for all wildlife in the forest and had been helping educate visitors to the Station of the marvels of the diversity of life in the rainforest for over 25 years.

It must be made clear that the mai mai rebels are not fighting for a political cause. This group is made up of elephant poachers and illegal miners. They were seeking revenge on ICCN for their valiant efforts to eliminate poaching of elephants and illegal gold mines from inside the Okapi Wildlife Reserve. The attack on the Epulu Station was in retaliation for recent engagements by ICCN rangers that disrupted poaching and mining activities in the Southern part of the Reserve. The rebels want to be free to reopen the mines and poach wildlife without interference. The OCP was also targeted because of our significant support of ICCN operations and personnel.

Since March of this year ICCN and its partners in Epulu have been requesting assistance as it was clear there was intent of a retaliatory action from these rebels. The lack of response to these pleas has now resulted in a terrible loss of life. It is now critically important that all partners contribute funding towards the rebuilding and re-equipping of ICCN Headquarters in Epulu.

The Okapi Conservation Project will begin to reorganize as we deal with the destruction of our infrastructure and the loss of ambassador okapi, which were so important to our mission and educational programs of the project. Our first priority is to restock the clinic and food stores and to help ICCN and OCP staff rebuild their personal lives.

After a thorough assessment of the damage to project facilities and equipment in Epulu we will define a rebuilding strategy and budget and we will be reaching out to our friends and supporters for help in returning the programs back to full operation. Meanwhile the OCP will continue to provide funds to the ICCN so that it can carry out anti poaching activities that protect okapi, and all the wildlife of the Ituri Forest.

All of our thoughts are with the people of Epulu and the families that lost loved ones. We thank our friends for their concern during this tragic time and know that with your support the Okapi Conservation Project and ICCN will again be working together to safeguard the forest home of the okapi.

The Wildlife Conservation Network has offered to collect contributions for the emergency fund while we focus our efforts on rebuilding the Station and keeping programs operating that aid the local communities.

Please make your contribution to: www.WildNet.org/support/ click on okapi on the pull down menu.

Rob Belterman has been working in Rotterdam Zoo since 1978, and is based in the Netherlands. Retired since 2014. His project activity encompasses the genetics (chromosomes) of birds and mammals, sexing European White Storks for re-introduction in the Netherlands, Bearded Vultures in Austria, and Cinereous Vultures in Mallorca. He coordinates two European Endangered Species Programmes for Red-crowned Cranes and Siberian Cranes. Rob is an enthousiastic bird photographer and always takes his camera with him when travelling.

Rob Belterman has been working in Rotterdam Zoo since 1978, and is based in the Netherlands. His project activity encompasses the genetics (chromosomes) of birds and mammals, sexing European White Storks for re-introduction in the Netherlands, Bearded Vultures in Austria, and Cinereous Vultures in Mallorca. He coordinates two European Endangered Species Programmes for Red-crowned Cranes and Siberian Cranes. Rob is an enthousiastic bird photographer and always takes his camera with him when travelling.