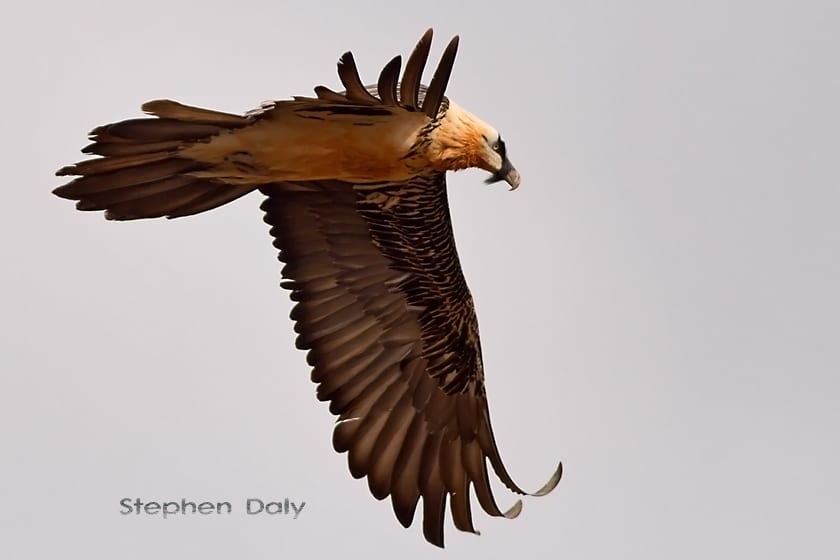 There are four different species of vultures breeding on the Iberian peninsula and probably the Lammergeier is the most impressive of them all. It’s also one of the birds on most raptor enthusiast’s wish list and not always an easy bird to see at close range.

Like many people until I saw one at a reasonable distance, I didn’t really appreciate this birds size, particularly in wing length. It’s huge. Reading up about them from time to time when I was a child collecting a magazine called ‘Birds of the World’ and seeing photos taken in the Middle East and Pakistan, imagining what it must be like to see these quite special scavengers that specialise in eating bones hence their other older name of Bone breaker as it is in Spanish, Quebrantahuesos.

When my first sighting came it was over 40 years ago whilst holidaying on the Mediterranean island of Crete and those distant specks didn’t really give me the impression of their huge size and I longed for better views.

As time passed I had quite a few opportunities to watch them wheeling along a high ridge or even going back to a secluded nest on a high ledge. Such sights were in the main done with the aid of a telescope and I always wanted to see them up close.My first close encounter with Lammergeier was in the Pyrenees during a summer tour in the Val d’Aran when I was scanning a nearby ridge for Rock Thrush when a bird popped over the top of a limestone ridge filling my bins with this fabulous image. I put down my bins looked around for the group, some of whom were looking at butterflies and I raised my head back to the skyline and pointed in the direction of where the bird should be and saw nothing, it had disappeared out of sight within seconds and literally just as I called out ‘Lammergeier!’ I was the only one who witnessed the bird that afternoon and I think that telling the group that you could see the red around its eyes didn’t go down too well!We did catch up with more of them later that week but for a long time I felt privileged that I had my own close bird.

A few weeks ago I went with my friend Alistair Hill to catch up and photograph this majestic bird. As the best opportunities are in Aragon and Catalonia we met in Barcelona and headed north. Alistair and I met some time ago when he booked a few days with Andalucian Guides to watch the spring migration here on The Strait of Gibraltar and we get on very well. He’s a Nikon man and I’m Canon but no need to quibble about what’s better. Both companies offer the best photo equipment that’s available and it just depends on how much you’d like to pay, what you are willing to carry about on tour and lots of other factors as well of course.

Feeding stations are undoubtably the best places to watch rarer vultures like Lammergeier. The vast majority of vultures present are Griffons but a few Black Vultures can come in and like Lammergeier tend to stay to the side or back of the main flock.

The stunning colours and details of eyes, feathers and bill of the adult Lammergeier make this one of the most beautiful looking raptors on Earth.

Here a sub-adult flaps across the hillside

Black Vultures are pretty scarce here in Cadiz province. There are some in neighbouring Huelva and Seville provinces and we do see a few juvenile birds during the winter months. A good place to see them is at Los Barrios rubbish dump. Not the prettiest of places but if you want to go through the gull flocks, griffons and at present hundreds of Black Kites, you may turn up a vagrant bird. Just as a matter of interest there was a report of a Song Sparrow at Algeciras. It’s a North American bird that may have been ship assisted. Close by there’s a Tropical Mockingbird that was in Gibraltar and the sightings of such unusual species close to large ports do suggest that they may have had ship assisted passage across the Atlantic Ocean.

Egyptian Vultures are really quite special and are our only true migrant species of vulture.This is a photo I took of a young bird during the Autumn migration here on The Strait of Gibraltar

An young Egyptian Vulture comes towards me head-on.

Adults and juveniles alike do tend to roost together and these scenes are quite special and not too common. During the Autumn migration scenes like this are more common when birds are unable to cross to Morocco when wind direction is too strong and in the wrong direction. The lighter coloured birds are adults and the darker ones are younger birds.

An adult Egyptian Vulture sweeps past an observation point during September last year.

This shot shows the full beauty and majesty of an adult Egyptian Vulture during the breeding season. Birds arrive early each year from their winter in Africa and are incubating eggs in mid March. Some birds, small numbers of them of course do spend winter on the Iberian Peninsula but a lot has to do with weather conditions during these months.

Griffon Vultures at a feed

A flight of Griffons

A Black Vulture looks down on three Griffons

Some Griffon Vultures taking advantage of early calving during spring at Barbate Marismas.

The other vultures that could be seen here in and around The Strait would be the Rüppell’s Vulture shown here hissing!

and the much rarer and smaller White-backed Vulture. I took this photo of an adult this January in Senegal and it’s important to note the both theRüppell’s and White-backed are likely to be juvenile birds from Western Africa.White backed markings on juveniles are not obvious as here with the adult but their black faces and smaller structure would be a good indicator of an unusual bird. TheRüppell’s is also a bit smaller when seen compared to the Griffon.