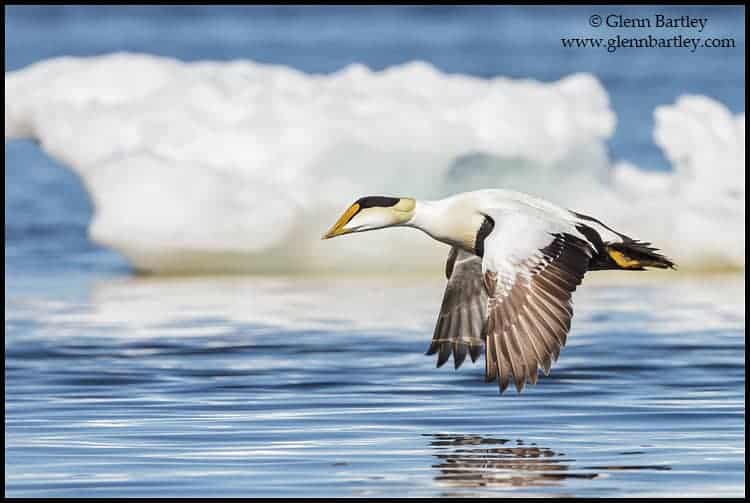 The air is filled with the sounds of wings clicking together as thousands of eiders migrate in closely packed flocks on their way to breeding grounds on the Arctic Coastal Plain.

Their wings strike each other and rustle as the birds fly low in an undulating formation that stretches as far as the eye can see in the thin strip of water, or “lead,” that frequently separates the ice-encrusted coast from floating sea ice.

This is not the silent, frozen Arctic that some may imagine; it is a highway through a white and frozen land that can be teeming with wildlife and quite noisy.

The eiders call and their wings click. Below in the water, bowhead and beluga whales migrate up the lead and you can hear their breathing as the ice grinds together.

We are here on the edge of North America studying these birds and estimating their population size and trajectory. And by edge, I mean the very edge—a few miles north from the most northern piece of land in the United States, at the edge of the ice that extends from the winter coastline, precariously anchored to the bottom of the Arctic Ocean.

We do our work, intently focused, but not immune to the knowledge that breakouts—the abrupt disconnection from the shore of ice that can cover several square miles—are increasingly common. It’s a sign of the changing times.

Every spring, king and common eiders fly from their wintering areas in Russia and western Alaska to breeding grounds in northern Alaska and northwestern Canada in one of the last great migrations left in North America. In just five weeks, hundreds of thousands of eiders will pass by our vantage point near Point Barrow, where the Chukchi and Beaufort Seas meet, the bulk of the birds passing in just a single day or two.

This migration has been the subject of counts every decade since the 1950s, allowing scientists to evaluate the state of the population. Early counts recorded numbers as high as 113,000 eiders passing in just 30 minutes. By the early 2000s, however, biologists raised concern when counts declined by more than 50 percent from those conducted in the 1970s.

Our counts suggest a stabilizing of the decline. The reasons for the drop in population from historic levels are poorly understood, but may be due to these Arctic birds living in an environment warming at twice the rate of the rest of the world, or to increasing human activities in their breeding, migratory, and wintering habitats. Breeding eiders are threatened by erosion of barrier island habitat due to storm surges associated with the drastic retreat of the pack ice in summer.

Our work begins amidst a late April snow. The first order of business is to find a suitable vantage point at the water’s edge to count the eiders. We must find an area of near-shore stable ice not likely to either drift to sea or crumble should heavypack ice move in. This is a tall order and requires expertise, advice, and guidance from local Iñupiaq guides and whaling crews.

Creating paths that can support a snowmobile requires hours of back-breaking work from town. These trails can be up to 10km long, winding through huge ice ridges. A warming environment has made them increasingly difficult to maintain.

After establishing a safe ‘perch’ at the ice’s leading edge, a wind block around the perch, a warm-up tent, and a bear fence around that tent to warn us of curious polar bears, we are ready to count. In teams of two, we keep our eyes on the sky for twelve hours a day (in two hour blocks to avoid fatigue) from late April through early June, counting eiders as they migrate past.

The pace of eider migration is quite variable. On some days, very few birds are seen. On others, eiders pass by in the tens of thousands. It seems daunting, but we count by 10s, 20s, and even 100s to come up with a total flock count. There are generally more birds passing by when the wind is from the south and the sea at the edge of the ice is open.

Sustained winds out of the north and east can hold the bulk of the migration back until the weather changes. This can result in days of nothing before eiders pour past on all sides and overhead by the thousands. The pace can be hectic and tiring, but the observations are quite accurate, as has been verified by our photo counts of flocks.

The eiders’ world is changing quickly. In just the past year, sea surface temperatures in the Chukchi sea have been 4° C warmer than average, resulting in historically low maximums and minimums of sea ice extent.

These changes will impact every aspect of the Arctic, including the eider migration. As we recognize World Migratory Bird Day,WCS (Wildlife Conservation Society)—along with local and regional partners—is striving to understand these changes and any opportunities to mitigate impacts.With population estimates down from historic levels, we can only hope that the world soon takes collective action to reduce the warming of our planet so that eiders may continue to wing their way through the Arctic in their multitudes for years to come.

This article was first published by National Geographic on 12 May 2018.