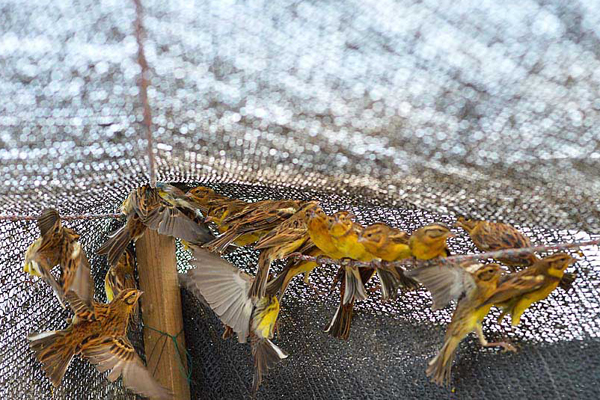 In 1914 the world’s last passenger pigeon died. Nicknamed Martha, she was not killed by hunters—like so many others of her species—but simply old age.

With her passing, the passenger pigeon (Ectopistes migratorius) was lost forever to extinction.

A hundred years before Martha’s death, however, the passenger pigeon may have been the most populous bird in the world with a population often estimated in the billions.

Now, conservationists warn history may be repeating itself. A new study in Conservation Biology warns that one of Europe and Asia’s most populous birds has suffered an 84-95 percent decline in less than 35 years from 1980-2013. Like the passenger pigeon, the yellow-breasted bunting’s (Emberiza aureola) decline is believed to be caused by relentless hunting and trapping, mostly in China. Yellow-breasted buntings winter in southern China as well as in northern India, Nepal, and across Southeast Asia. But almost all individuals migrate across southern China—whether they winter there or not—putting them at risk from hunters and trappers.

“The magnitude and speed of the decline [of the yellow-breasted bunting] is unprecedented among birds distributed over such a large area, with the exception of the passenger pigeon, which went extinct in 1914 due to industrial-scale hunting,” said lead author, Johannes Kamp with the University of Münster.

Until 2004, the yellow-breasted bunting was listed as Least Concern by the IUCN Red List, but by 2013 conservationists had raised it to Endangered. Populations have collapsed in Eastern Europe and Western Russia, much of Western and Central Siberia, as well as Japan. Breeding birds have vanished from Finland entirely. In all the species as lost around 5,000 kilometers of its range and has dropped precipitously from a population that has been estimated in the hundreds of millions in 1980.

“The story of the yellow-breasted bunting illustrates how little we know about trends in populations in many species in the region. There is growing evidence that these declines are part of wider problems for common Asian birds,” said Simba Chan, Senior Conservation Officer at BirdLife International.

Like passenger pigeons, yellow-breasted buntings come together in huge flocks. Hunters using nests kill the birds en masse during night roots. Much of the hunting is believed to occur in China, where a law banning the practice in 1997 has not stopped the mass-killings. According to the paper, millions of yellow-breasted bunting and other songbirds were sold on the black market in China as recently as 2013.

“Roosting flocks in reedbeds are disturbed and then caught in mist-nets, they are cooked and sold as ‘sparrows’ or ‘rice-birds’; this practice was formerly restricted to a small area of southern China, but has now become more widespread and popular owing to increasing affluence, and hunters now have to travel widely to find sufficient birds,” according to the IUCN.

Moreover, the mass killing is not done to feed the poor or hungry.

“Rather, they have become a fancy dish among comparatively wealthy people,” the researchers write in their paper.

Indeed, in Sanshui city hundreds-of-thousands of yellow-breasted buntings were eaten during an annual food festival in recent years, despite the prohibition on killing them.

Another major problem is simply a lack of data and surveys across much of Asia, including China.

“In the last decade birdwatching has become increasingly popular in China. Birdwatchers will play an important role in future data gathering,” said Chan. “Now is the time to address these worrying declines across the region by mobilizing people for conservation action.”

Given the crisis, the Convention on Migratory Species is working on a plan to save the species, though it will not be ready until 2017.

“To reverse these declines we need to better educate people of the consequences of eating wildlife. We also need a better and more efficient reporting system for law enforcement,” noted Chan.

The stunning decline of the yellow-breasted bunting may not be a lone phenomenon either. While conservationists have long focused on rare species that may never have been particularly abundant, “recent evidence suggests that widespread losses in common species might be an underrated conservation problem,” according to the paper.

This article was first published by Mongabay.com on 08 Jun 2015.