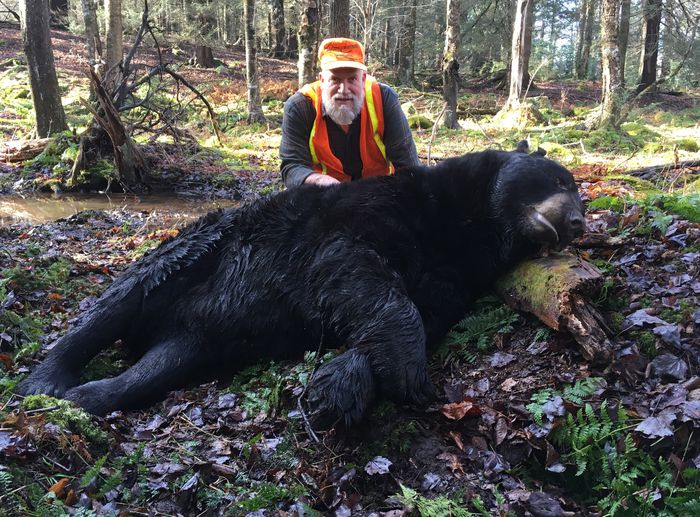 It took 28 years for Matthew Erdie Jr. to bag his first black bear back in 1995, and the fifth one he shot Tuesday is about as big as his first four combined.

“It was crazy to get this thing out,” the 67-year-old man told lehighvalleylive.com Wednesday.

Erdie shot his 2019 bear around 7:30 a.m. in Greene Township, Pike County, not far from Promised Land State Park, in what’s shaping up to be a very successful year for bear hunters across Pennsylvania.

Through three days of the general bear season that began Saturday, hunters killed 1,498 bears across 52 counties, the Pennsylvania Game Commission said Wednesday based on bear-check station numbers. That compares to a three-day total of 1,833 in the 2018 general season.

However, the 2019 general season harvest is complemented by a large bear harvest during new and expanded early bear seasons for muzzleloader, firearms and archery hunters, the commission says. Factoring in the early season harvest, 3,373 bears were taken through Tuesday. That already tops the 2018 total bear harvest of 3,153, which was 11th best all-time.

Erdie’s bear is the third-heaviest taken across all 2019 bear seasons, the Game Commission said: The largest bear through all 2019 seasons continues to be a 813-pound male taken with a rifle on the opening day of the general season in Smithfield Township, Monroe County, by Victor M. Vassalluzzo, of Kintnersville.

Theheaviest bear ever taken in Pennsylvaniawas an 875-pounder harvested in 2010 in Middle Smithfield Township, Pike County, according to the Game Commission. Since 1992, seven black bears weighing at least 800 pounds have been lawfully killed in Pennsylvania hunting seasons.

Erdie uses a .30-06 rifle for bear and a .243 for white-tailed deer, which he’ll be pursuing in Sullivan County with the start of Pennsylvania’s firearms season Saturday.

He hunts on private land near a cabin that belonged to his late uncle, and was lucky to have had his cousins nearby after felling this year’s monster.

“My cousins came up with their four-wheeler and there were five of us there and it took us like 4 1/2 hours” to get the bear 100 yards or so to the road, Erdie said.

“It was something else,” he said of the size of the bear.

And it wasn’t even the biggest one he saw this week.

“If this was 743 pounds, this other bear that we saw by my cousins, that sucker’s got to be like 1,000 pounds,” Erdie said. “It has to be 200 pounds bigger than this. It could hardly walk. … He stood up and scraped his neck on a pine limb.

“We saw about eight different bears this year.” Erdie has two Pennsylvania triple trophies to his name — a bear, buck and wild turkey shot in the same year — and one grand slam, which includes both a fall and spring gobbler.

For this year’s bear, Erdie and his cousins got the hide off Tuesday night, and he plans to have it tanned. He got a bear-skin rug made out of the 2011 bear.

“We’re going to butcher it ourselves,” he said in a phone interview from inside his pickup truck, away from the reciprocating saw at work quartering the remains. “We’ll make roasts and the ribs, we’re leaving the bone in the ribs.”

He also plans to use a smoker to create bacon out of some of the meat. “It’s almost like a pig,” he said, adding that it had about 10 inches of fat stored up for winter.

Other large bears taken in the 2019 general season’s first three days — all with a rifle —include, according to the Game Commission:

The top bear-hunting county statewide over the general season’s first three days was Lycoming County with 113 bears. It was followed by Tioga County with 107 bears.

This article was first published by LeHighVallyLive on 27 November 2019. The practice of bear hunting is in no way supported or condoned by Focusing on Wildlife. The article has been re-published in order to highlight and condemn this cruel and abhorrent practice, which should be classified as wildlife crime.

Why is Focusing on Wildlife celebrating and promoting barbaric, cruel animal terrorism? You should be ashamed of yourself for publishing an article that comes across supportive and complimentary of inhumane, violent speciesism. Publicize the horror of what hunters do, but not via an article such as this. These hunters should suffer the same way they torture poor, innocent, beautiful bears.

I agree with you, Connie. For months now, Focusing on Wild Life has very much begun to sound like National Geographic, with this very disturbing focus on negative reports of various atrocities perpetrated by humans on other species. They’re loosing my interest…

Annick, our mission is to expose and condemn wildlife crime. That is the reason why this article has been re-published. i.e. to bring this cruel and abhorrent practice to the attention of the public, who very often have no idea what is being done to our wildlife.

Trophy and bragging rights. How pathetic.

DERANGED VILE POS !! WHO DO THESE SCUM THINK THEY ARE TO MURDER GODS CREATURES. REAP WHATS COMING YOU DISGUSTING REPULSIVE WASTE OF SPACE !

If you want to hunt build a time machine and go back to the Stone Age, heartless sorry sucka losers

These people are disgusting – to actually brag about killing a defenceless creature is abhorrent. They should hang heir heads in shame. It is people like this that should be got rid of, not bears.