This post is about colour. I am in between wildlife trips so I thought it would be interesting to play around with the colour in some of my wildlife images. Rather than change the colour of the subject, I wanted to see what effect it would create if I removed the background colour. Presumably, it would be more effective on some forms and colors than others. While playing, a number of fascinating insights emerged. You will not learn about this sort of thing from books or websites, once has to play to get a sense of what works and what does not!

“We must draw our standards from the natural world. … We must honour with the humility of the wise the bounds of that natural world and the mystery which lies beyond them, admitting that there is something in the order of being which evidently exceeds all our competence.”

One of the first things professional photographers will ask you when they are looking at your image is what are you trying to say – what is the message your photograph is supposed to communicate. If it is just a record of what you saw that is one thing, but if you are trying to show something more, the message needs to be clear. You will quickly realise how important the focus and colour of the background, or negative space, in the image is and whether it emphasises the subject, or disguises it.

I am an amateur wildlife photographer so this is a journey of exploration, physically, intellectually and spiritually. Physically, I do not want to let the grass grow under my feet, and my camera is my passport to travel. Intellectually, I have a deep need to communicate the beauty, inter-connectedness and innate intelligence in nature at a time when humanity is expanding and destroying most natural things in its path. Spiritually, I am becoming increasingly aware of the innate intelligence of nature and that we are the ones that need to learn her ways with considerably more humility than we are showing, currently.

“Have more humility. Remember you don’t know the limits of your own abilities. Successful or not, if you keep pushing beyond yourself, you will enrich your own life–and maybe even please a few strangers.”

I have been privileged enough to go to Mashatu in Botswana, on the Chobe river in Botswana and the Kruger Park in South Africa in the first half of 2017. This post shows a selection of images from those trips, in which I have modified the saturation and sharpness of the background using Adobe’s Lightroom. The purpose of the modification is to reduce the distracting background colour in order to emphasize a key feature of the animal or bird. Removing the background colour enables the viewer to focus on the true colours of your subject.

“The picture will have charm when each colour is very unlike the one next to it.”

These cubs were lying on a gravel sandbank. It was cool in the summer morning heat. The background was a dark croton grove.

Water lilies on the Chobe river, painted with sunlight but without the blues of the water in the background . 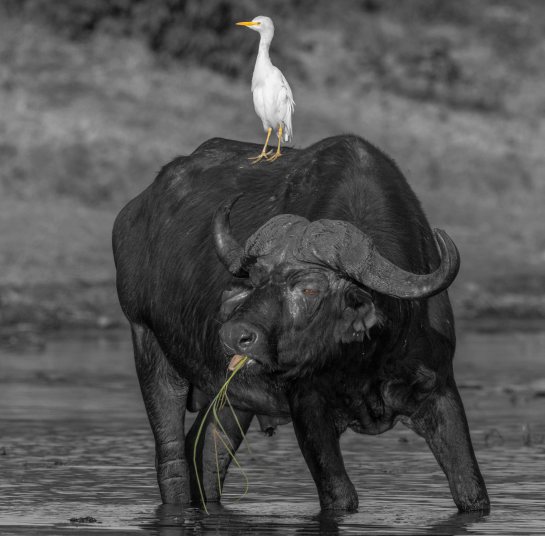 A water lily standing tall in the water showing off its greens, whites and yellows without the distraction of the blue in the water.

A juvenile Bateleur Eagle standing on the bow of a dead tree. Without the background colour, the browns and blacks stand out as does the distinctive facial skin colour. The colour of the facial skin is an indication that this is an older juvenile. The younger ones have a green tinge to their facial skin.

“Every time you shift to a different color or different hue you are creating interest. It’s a subtle thing but it builds content.”

A Purple pod Terminalia with the sun behind it. The background color and the greens are removed which emphasizes the colour of the seedpods.

A summer migrant looking for insects. This is a Lesser Spotted Eagle.

“It is a wholesome and necessary thing for us to turn again to the earth and in the contemplation of her beauties to know the sense of wonder and humility.”

This lion cub must have been bitten by an insect and began to lick the itchy area on its paw. Just the yellows, browns and oranges showing.

A Diederick’s Cuckoo in Mashatu. The de-saturated background emphasises the emerald greens on the wings back and tail, and that red skin around its eye. 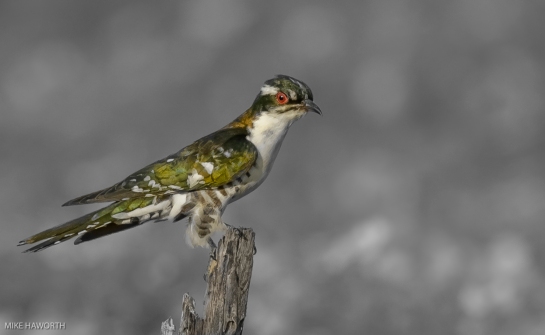 A Plum-coloured Starling, now called Violet-backed Starling, playing with a leaf in Mashatu. 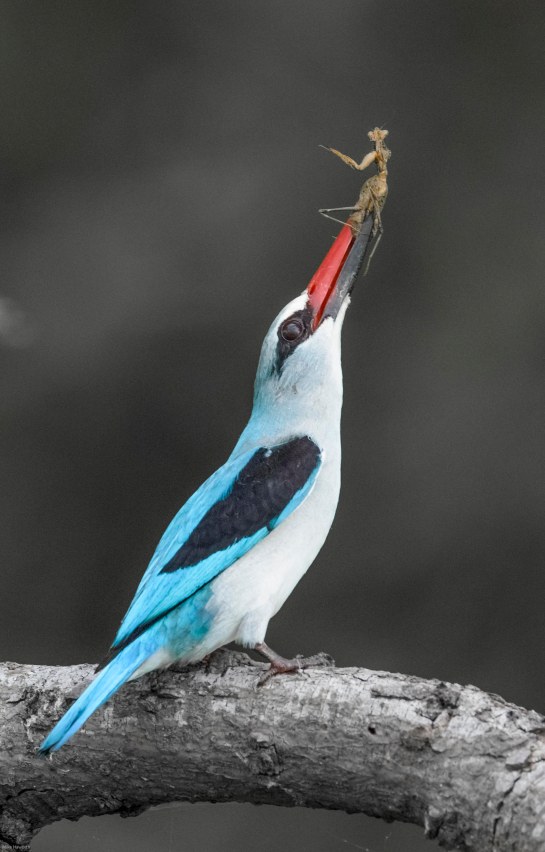 The blue facial shield on the African Jacana got lost in the blue water background. Removing the blue in the background emphasizes the blue shield and the complementary rich ochre colour on the back and body feathers and the golden necklace.

A juvenile African Jacana foraging on the water-lily pad for insects and snails. Taking the colour out of the water gives the lily pad a greater floating effect.

“Real genius is nothing else but the supernatural virtue of humility in the domain of thought.”

This female hippo decided we had got too close. When this happens it can be extremely dangerous so you need a competent boat driver and guide. In all the excitement you do not see the colour of the water, just those eyes and the brown-pink colour around the eyes and nostrils.

In Mashatu in summer, we found a pride a lion which included a few cubs. It was mid-morning so nearly sleep time for these youngsters. Just allowing the yellows and oranges of the cubs to come through. Desaturating– the background colour improved the image.

“Colour is uncontainable. It effortlessly reveals the limits of language and evades our best attempts to impose a rational order on it… To work with colour is to become acutely aware of the insufficiency of language and theory – which is both disturbing and pleasurable.”

One of the lioness in the pride was watching the goings on attentively. The darkened background emphasised the colours on her face.

I took the green out of the bush and blue out of the sky to emphasize the reds and browns of this old male Swainson’s Spurfowl. The red facial skin is a key diagnostic when identifying this species of spurfowl. You could see it was an old male from its worn down and broken spurs on the back of his legs.

A Pearl-spotted Owlet was sitting in a tree close to where we had been watching the coalition of three male cheetahs lying in a field of yellow devil thorn flowers.

Taking out the blue in the background removes the complementary blues and seems to reduce the colours competing for attention and emphasised the colour of the owlet.

It also gave a sense of how well camouflaged this owlet was in the tree in direct sunlight.

“When infinite colors exist between the dark and the light, who among us would choose to see only black and white? “

In summer in Mashatu, you will see many Carmine Bee-eaters. They are incredibly beautiful bee-eaters, which hawk insects from a perch. By taking out the background colour, you can see its bejewelled colours

The Blue Wildebeest is a grey-black colour in the bush. They do have colouration on their bosses and their youngsters are brownish in colour.

One of the many avian summer migrants from the northern climes. A White Stork taking a break from its foraging in the grasslands in Mashatu.

The removal of background colour helped show off this Yellow-billed Hornbill. Interestingly, bird identification would probably be much easier if the key characteristic colours were emphasised and the background desaturated.

“You put down one colour and it calls for an answer. You have to look at it like a melody.”

A water-lily floating on the Chobe river with a pollinating visitor. Without the blues from the water, the tips of the petals seem more pink.

A juvenile African Jacana chick searching for insects on a bed of old water lilies. The background was naturally dark which showed off the subject well.

“The objects in front of you are flowers, but the subject is colour.”

A water lily in full summer bloom in the Chobe river. I really liked the colours reflected in the water in the foreground .

A Great White Egret with its distinctive yellow bill, yellow eye and black legs and feet.

A Banded Mongoose mother with her youngsters. Without competing colours, the the colour bands on their backs really stood out.

Another Diederick’s Cuckoo with its favourite food, a caterpillar. 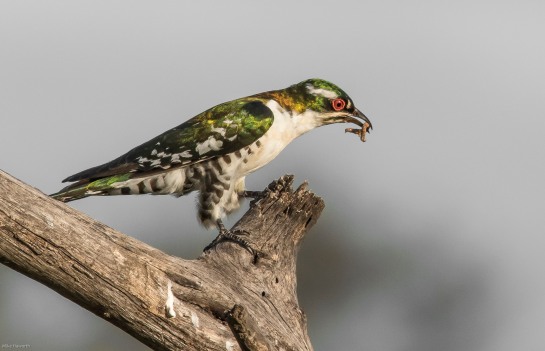 “Colour is a powerful physical, biological, and psychological force. When less color and less intense color is present, trace amounts and subtle differences become highly significant and are strongly felt.”

A young shoot embraced in the fork of this syringa tree. The green leaves signify hope, youth and a new start.

You don’t usually notice the browns in a juvenile Martial Eagle, but they stand out in front of a desaturated sky. 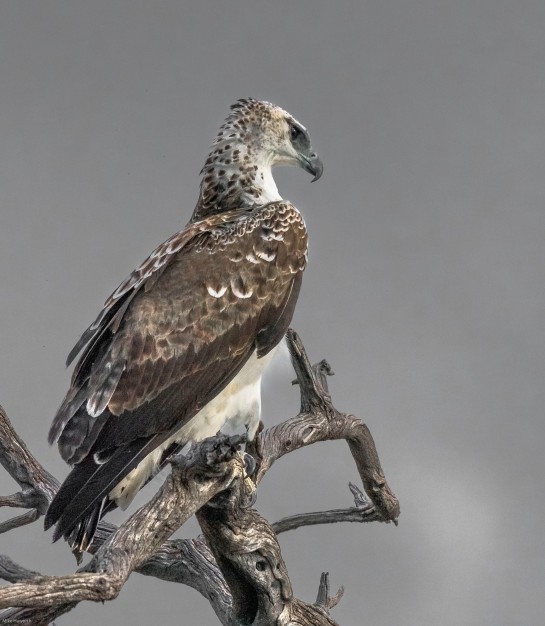 Again desaturating the background colour from the water helped bring out the greens, yellows and pinks in this water lily.

“In order to change a colour, it is enough to change the colour of its background.”

An adult African Jacana alighting on a water lily flower. Somehow the colours of both the lily and Jacana looked looked more intense with the color of the water desaturated. The contrast gives the image more definition. 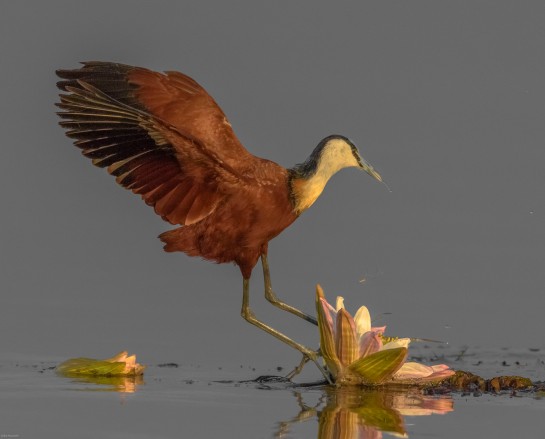 An adult Egyptian Goose bathing. The water just running off its back. By taking the blue of the water out of the image gives it a cold feel which was in stark contrast to the very hot morning when this image was taken.

Regal, powerful and striking avian predator, this fish eagle was surveying its territory along the Chobe river.

The use of colour in a wildlife image is intriguing. The negative space around the subject is a powerful compositional component. There are occasions when complementary colours work well together and other times when removing the cooler colours really emphasise the warmer ones.

This is a journey of discovery for me. I readily embrace colour in my wildlife photography but at times it can be distracting. This is another example of learning to see.

“Nature is more depth than surface. Hence the need to introduce into our light vibrations represented by the reds and yellows, a sufficient amount of blue to give the impression of air.”

I remain ever grateful to be able to visit and photograph wildlife in some of the most beautiful wild settings in Africa.