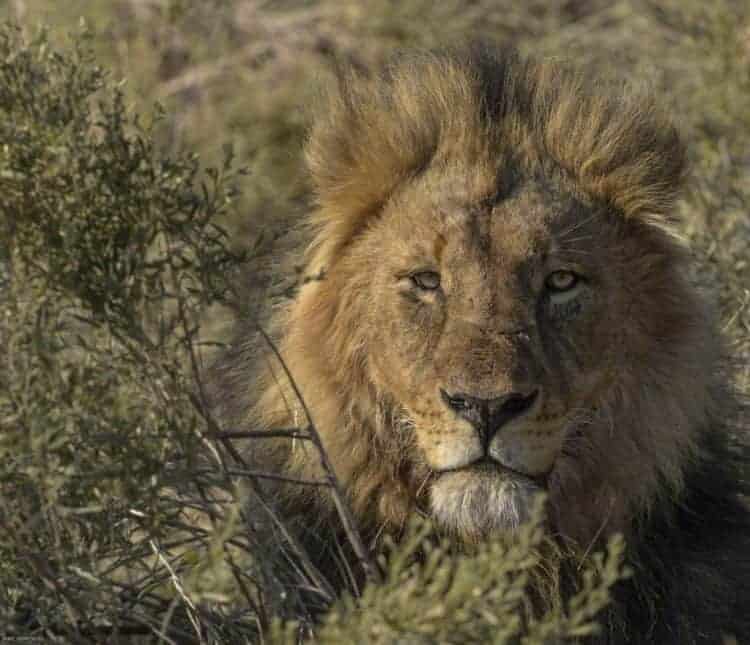 Winter is a time when predators prevail in Mashatu. This is a wild place in the south-east of Botswana, where game, notably the elephants and the lions, are free to move back and forth between Botswana and Zimbabwe. During our recent trip to Mashatu in mid-August, we were fortunate enough to see the lion on a number of occasions and the resident male lion in particular.

This large male lion was lying in a grove of wild sage. It has a unique ‘herb” fragrance and you either like or you don’t. Dereck Joubert said in one of his wildlife films that when he and Beverly were flying high over the Botswana bush in their light aircraft that he could smell the wild sage and he knew he was going home. I feel the same sense of familiarity when I the smell the wild sage.

This male lion was lying among the wild sage. Presumably the females had killed the eland which had been substantially eaten by the time we arrived.  Despite being full, the male lion lay next to the eland carcass. It was not especially warm so was not too smelly.

While lying in the sage bushes he could not see anything but judging from the way he turned his head and refocused he was sensing all the movement around him.

This is a big strong dominant male who has ruled this area for the last few years. He is a lone male, so has no coalition partners to rely on if there was an invasion from a new coalition seeking new territory.

“Life isn’t measured by the number of breaths you take, but by the moments that take your breath away.”

You are always told to sit quietly in the vehicle when near a predator and not to stand up or break the outline of the vehicle in any way. The lion can definitely sense you are in the vehicle but somehow does not associate you as being separate to the vehicle.

As a wildlife photographer somehow I am not so sure that the lions do necessarily see you as part of the vehicle. This male lion was directly focused on the “big eye” looking at him.

The big eye being my 600mm lens. His small pupils showed that it was bright sunlight.

After watching the “big eye” for a while he lost interest and started to look around again, but every now and then he would stare deeply into my lens. A look that sent chills down my spine.

“We take photos as a return ticket to a moment otherwise gone.”

One of the reasons this male was looking around is that he had heard a family group of elephants approaching through the sage brush.

They are not exactly quiet or fast. Interestingly the elephant did not pick up on the lion until they were quite close and then must have smelt them.

The elephants did not have any youngsters in the herd so did not take too much notice of the lions.

The male lion decided to move around the other side of his meal to keep an eye on the approaching elephant.

“If your mind is expansive and unfettered, you will find yourself in a more accommodating world, a place that’s endlessly interesting and alive. That quality isn’t inherent in the place but in your state of mind.”~ Pema Chödrön,

The two lionesses were out of the line of approach of the elephants so took no heed of them. The outstretched paw said it all.

At one point one of the lionesses looked up but only because we started our vehicle.

“Fill your life with adventures, not things.Have stories to tell not stuff to show.”

Later that day, probably half a kilometre to the north of the eland kill, we found the dominant male lion and his lioness down at the water in the Majale river.

He seemed very relaxed just keeping an eye on us. When a large male lion looks at you like this, it does make you wonder what he is thinking.

He seemed to be the watchman while his lioness was having her drink. The pair seemed to be on their own so they could have been a mating couple.

“I just wish the world was twice as big and half of it was unexplored.”

In the last light, I liked the various shades of bond in his mane.

The next day we found four young male lions on their own. I am not sure whether they had already been kicked out of the pride or whether the pride had just splintered for the time being.

Either way they were still in the dominant male’s turf which would be a problem in time.

When you see a large male lion or large lioness in the wild it puts life into perspective. These are huge and immensely strong predators where a human would not be the slightest match. All of a sudden it dawns on you that you are not top of the food chain.

“And if travel is like love, it is, in the end, mostly because it’s a heightened state of awareness, in which we are mindful, receptive, undimmed by familiarity and ready to be transformed. That is why the best trips, like the best love affairs, never really end.”