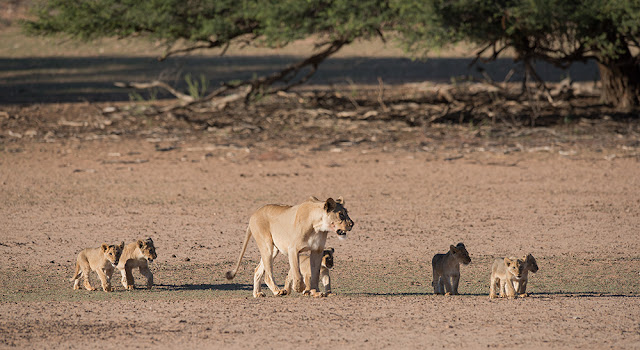 Every now and again, you find yourself having a day on safari that seems hard to top. The 11th of December, 2014, was one such a day. My wife and I were on a quick safari to the Kgalagadi Transfrontier Park that straddles South Africa and Botswana.

If you’ve been following my photography for a while, you’d know it’s a destination that’s on my travel list most years. After having a fairly quiet trip thus far when it came to big cat sightings (yet a trip to the Kalahari is always special and unique in its own right), we struck gold that day. It was all lions for us on this day. It started with us being roared from our sleep at 3am in the morning while staying in the Urikaruus Wilderness Camp, and seeing those same lions drink from the camp waterhole later as the sun rose.

When it looked like this pride of 8 lions was going to flop down for the rest of the day like lions do, we headed north to the 13th Borehole waterhole to see what was going on there. There then found a gorgeous-looking male lion and a lioness, having just drunk their fill from the waterhole, mating right next to our vehicle!

This post, however, is about the other members of this particular pride. When the male and female had mated for another round, and their throws of passion died out, I looked across the Auob riverbed and saw this bunch approaching!

This lioness was guarding a creche of 7 cubs of varying ages (we later saw that she was the mother of the eldest bunch of cubs), and she was marching them to the water at a pace! 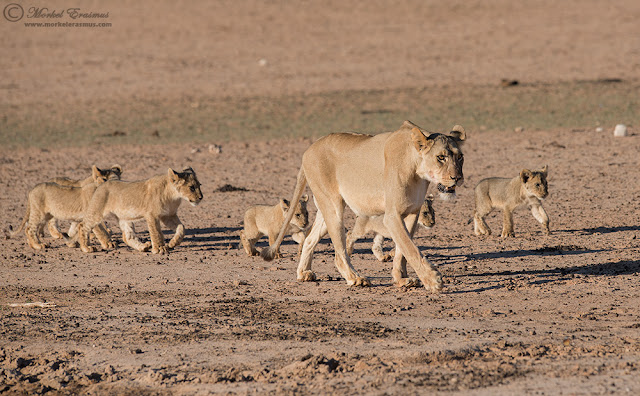 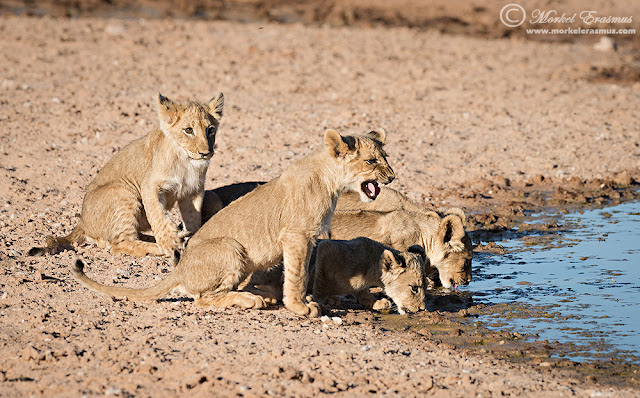 After about 15 minutes the whole bunch moved across the road where we were parked and up into the dunes. We decided to proceed north to Mata Mata as we needed to refuel. 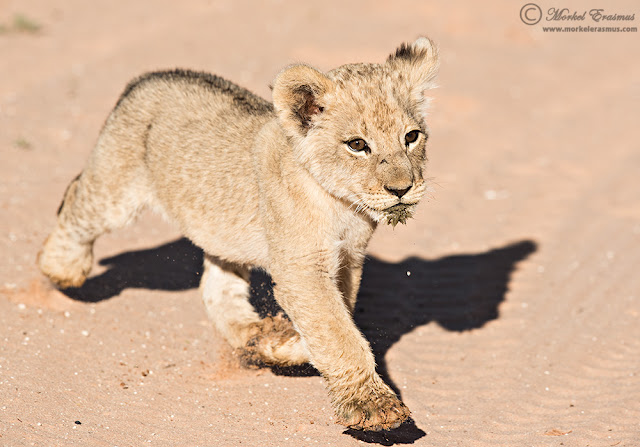 Seeing as we needed to return to Urikaruus anyway, we decided to check up on whether the lions had returned to the waterhole at 13th Borehole when we came back down at around 11am. Sure enough, the whole creche was lying up under a bush right by the waterhole again! 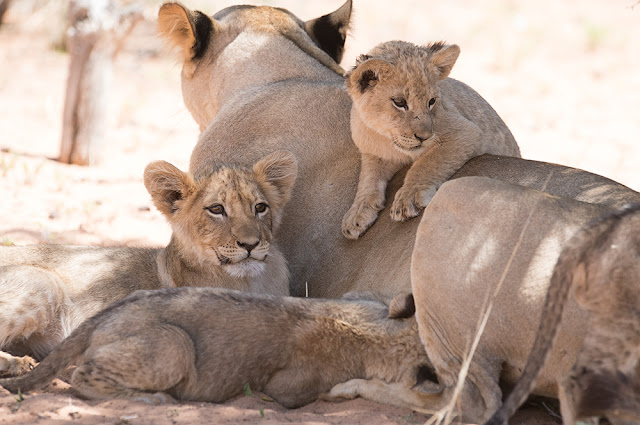 They were going to be there for a while, given the heat and the proximity of water, so we headed back to our camp (about 10km from there) to have some lunch and a quick rest. The plan was to get back to this spot by around 14h00 and see what they would do for the afternoon.Upon our return they were still lazing about – but the incoming storm caused the temperatures to drop and the light to go nice and soft, which turned out great from a photographic point of view. 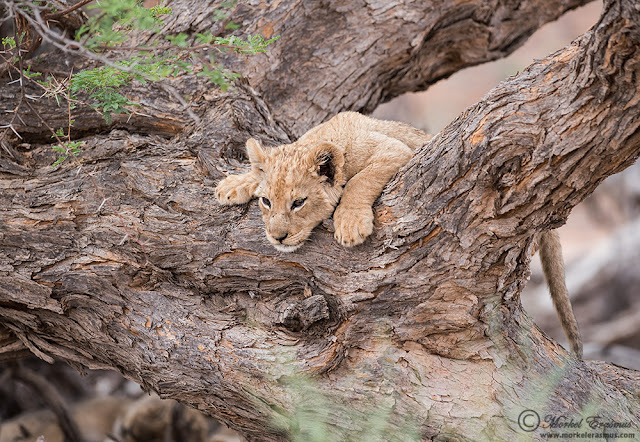 Afterwards, a couple of the cubs tucked into the female for a bit of milk – and she certainly wasn’t having a great time between their sharp claws and fangs! 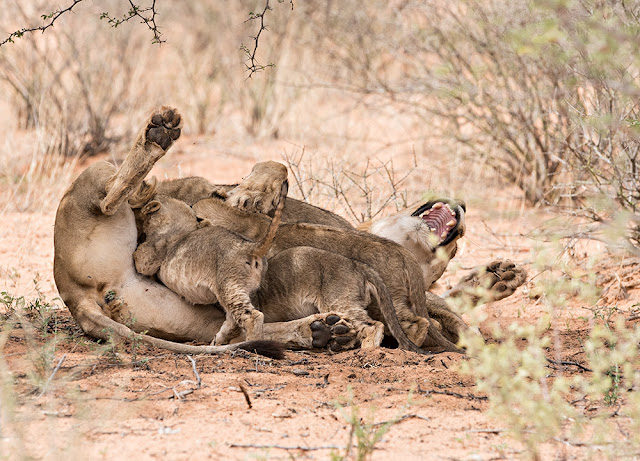 The weather was turning ominous pretty fast, and I had a feeling the lion creche would be on the move soon…

Sure enough, all of them got up and moved down to the waterhole again…

…filling their bellies with life-giving water… 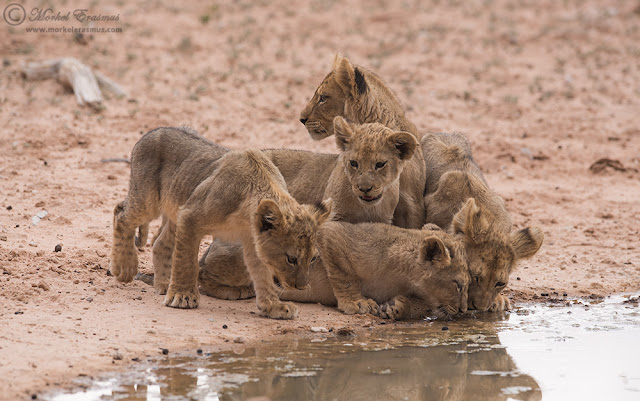 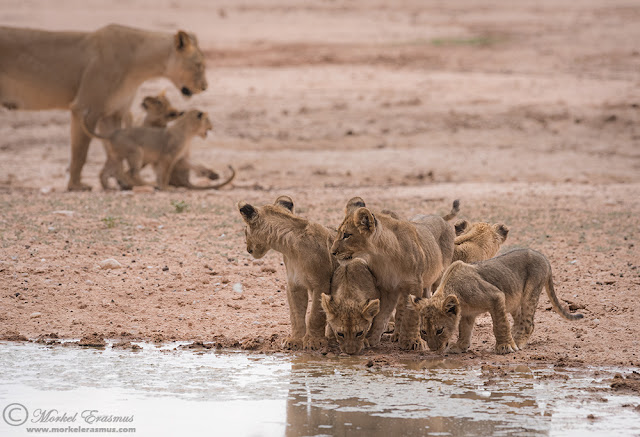 The lioness then moved back across the Auob. Seeing that they seemed to have come down from the dunes on the Namibian side I concluded that they would head back there (their place of shelter) when the storm came in.The cubs played around for a few more moments, and then followed after her.

We drove around to the main road leading over the Auob riverbank heading back north to intercept their approach as they made their way back up the dunes.

As they moved away, we reflected on the special time we had with these 7 cubs and the lioness that took care of them.

For the most part of the day, except for the morning session which was shared by about 10 vehicles, we had them all to ourselves because we stuck it out in the heat and spent time with them when everyone else was trying to relax in the uncomfortable hours of the afternoon.It’s worth putting the time in with wildlife photography! I always say – keep what you have.

Too often people see an animal, decide that it’s too static for them, and move on in search of the next sighting. When much can be achieved by simply sitting, observing, waiting, and merely enjoying it for what it is – a privilege!

I used to relish writing these kinds of “bio” pieces and would flaunt the odd impressive word and use dashing grammar to make it sound like I am a boundary-shifting photographer. These days I prefer stating it in much simpler ways, much more relatable ways, much more believable ways…The fact of the matter is this: I love Africa. I love its people, its wild places and its wildlife. I love being immersed in these places, observing and photographing the fall of light on the land and the daily lives of the creatures that call it home, and presenting the results to whoever will take a look.To me, nature photography is all about being in the moment, and capturing that moment in a way that can relate to someone who didn’t have the privilege of being there with me. Sometimes I am able to capture a unique vision of the scene before me, and sometimes I just capture it the way most folks would according to classical photographic guidelines. Yet I always enjoy sharing the images and experiences and imparting the knowledge I have, both in-the-field and later online or in presentations, workshops and courses. I also just simply enjoy capturing and sharing the beauty of God's creation!The greatest thing I’ve found about wildlife and nature photography in Southern Africa is the unity and familiarity of the community of people that share this passion. We come from all walks of life and all cultures and backgrounds, yet our passion for our natural heritage and our dream to see it preserved for future generations binds strangers together and fuels conversations around campfires long after other people have run out of conversation and energy.Join me on a WildEye adventure to experience this sharing community spirit and learn to anticipate that fleeting moment and be ready for it, learn to immerse yourself in the experience without losing focus of your photographic goals…and above all, learn to see Africa anew… because there are none as blind as those who look but do not see!

Since picking up a DSLR camera for the first time, a little over 3 years ago, Morkel has been invigorated with an unbridled passion for the photographic art form. He has grown at a tremendous pace and put immense energy into the creation of his images.He absolutely loves spending time in the wild places of his native Southern Africa. From a young age he has been visiting legendary wildlife and outdoor locations, including the Kruger Park National Park and the Drakensberg Mountains, with his family. Now that he has found a way to share the natural beauty of his homeland with the rest of the world he is regularly out on photography trips.An Industrial Engineer by profession, and an accomplished artist in genres like music and poetry, Morkel has always enjoyed whatever allows him to express his creativity to the fullest. Photography turned out to be the perfect "marriage" between his engineering brain and artistic soul."I hope that in some way I can raise awareness through my imagery of the plight of not only our wildlife but also the fragility of the last remaining wilderness areas that they call home.”Morkel was recently honoured for his commitment to his craft by receiving a "Highly Commended" for one of his images in the 2010 BBC Veolia Wildlife Photographer of the Year competition. He is based in Mpumalanga, South Africa and even though he prefers going on safari with his family and friends, Morkel also leads the odd photographic safari and has recently begun presenting workshops in post-processing techniques.