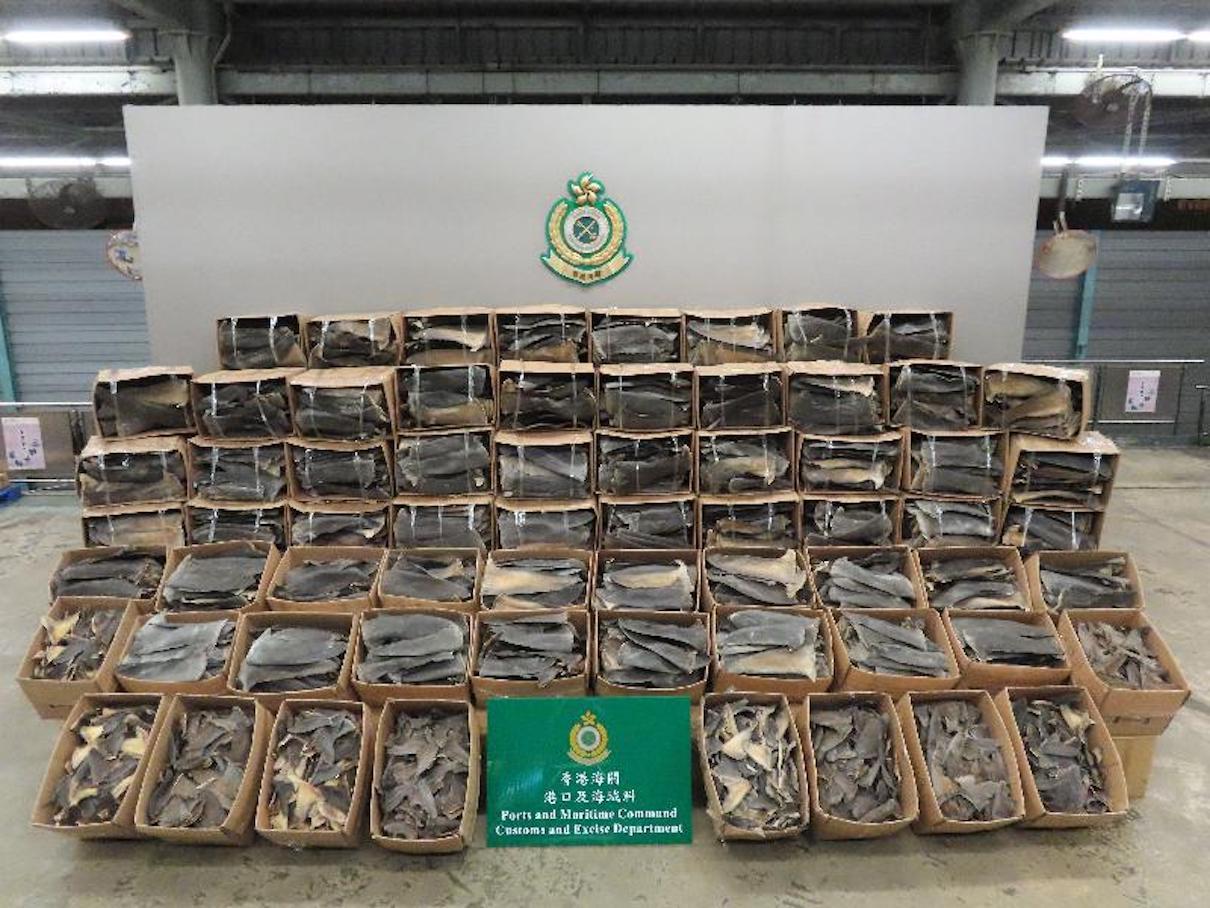 Customs officials in Hong Kong have seized 26 tons of shark fins from an estimated 38,500 sharks classified as vulnerable and protected species — the biggest shipment ever to be intercepted in the region, according to a press release published May 6. This is more than double the amount of all fins seized in 31 shipments in Hong Kong in 2019, which totaled 12 tons.

An official from the Agriculture Fisheries and Conservation Department (AFCD) identified the shipment to contain fins from 31,000 thresher sharks (Alopias vulpinus) and 7,500 silky sharks (Carcharhinus falciformis), which are both listed as vulnerable species by the IUCN and protected by CITES, an international treaty to prevent the illegal trade in endangered animals and plants.

There was also a small portion of fins from species that are not protected under CITES, and these may have been used for cover, Cheung said.

The shark fins were packed into 773 nylon bags and stowed in two containers, Cheung said. The customs declaration stated that the containers held “pescado seco,” meaning “dried fish,” but the fact that it was written in Spanish roused suspicion since English is normally used on official documentation. Cheung also said that Hong Kong officials have encountered “similar cases from Ecuador,” so the country of origin raised more red flags.

A 57-year-old man was arrested in the Sai Ying Pun area of Hong Kong in connection with the seizure, but released on bail pending a formal investigation.

It’s estimated that more than 73 million sharks are involved in the global shark fin trade each year, and about 70% of sharks that enter Hong Kong are vulnerable and endangered species, according to a report by the Washington, D.C.-based NGO Oceana.

Sharks are mainly valued for their fins, which are used to make shark fin soup, a pricey dish commonly served at weddings and other special occasions. In many cases, fishermen will simply cut off the fins from a living shark, then throw the animal back into the water. Since sharks need to swim in order to breathe, they slowly drown.

Gloria Lai Pui-yin, senior conservation officer of sustainability at WWF-Hong Kong, said the huge quantity of silky and thresher sharks in this shipment was quite troubling.

“Both silky and thresher sharks are threatened with extinction,” Lai told Mongabay. “Their wild populations are decreasing and have been under CITES trade controls since 2017. While the shark fins found in the Hong Kong market come from about 76 different species of shark and ray, silky shark is the second most commonly traded globally. Overfishing of these species poses the serious risk of driving them to extinction.”

Like most shark species, silky and thresher sharks are slow to reproduce, so overfishing these species can have severe consequences, Lai said.

“In general, sharks have a long lifespan and they become sexually mature late compared to other fish,” she said. “They have small litter sizes, which make them more vulnerable to overfishing. For instance, silky sharks have an average of 5 to 7 pups per litter and a gestation period from 9 to 12 months. Thresher sharks are even more vulnerable. They have a litter size of only two pups.”

Dorothy Cheng of WildAid Hong Kong also expressed concern about the “sheer number” of thresher and silky sharks in this consignment. However, Cheng said she doesn’t believe this seizure marks a growing demand for shark fins in Hong Kong, but rather indicates stronger policing of the trade, possibly due to tighter border restrictions during the COVID-19 pandemic.

“The fact that a seizure of this size was made could be more a reflection of tighter border controls, increased cooperation between Hong Kong and the mainland, and desperation on the part of the traders rather than increasing consumer demand,” Cheng said.

In China and Hong Kong, shark fin soup is losing its popularity, especially among younger people, according to Cheng.

“There is a growing awareness in China about the need to conserve and protect sharks,” Cheng said. She cited a 2016 surveyof Chinese residents that found 93% of respondents had not consumed shark fin in the previous six years.”

While the popularity of shark fin soup may be going down in China and Hong Kong, Cheng worries that demand will rise in developing countries.

“A burgeoning middle class in Thailand, Vietnam, and Indonesia is continuing to drive demand for shark fin soup,” she said. “According to WildAid’s 2017 survey, more than half of urban Thais have eaten shark fin, and 61% of respondents said they will consume it in the future.”

“We hope this is a sign of things to come,” Stokes told Mongabay. “The battle against the shark fin trade is a long road, and is fought on multiple fronts. Education is key for consumers, law enforcement on the high seas is needed to stop the killing happening in the first place, and investigations are needed to gain intelligence to preempt shipments and have law enforcement ready. Follow the money, and prosecute. Shark fin traders, like sharks, are not an infinite resource.”

Lead Image Source: The shipment of 26 tons of shark fins that was seized in Hong Kong in early May 2020. Image by HK Customs.

This article by Elizabeth Claire Alberts was first published on Mongabay.com on 7 May 2020.

This evil, sick trade may be on the downward trend, but only until that vile country, CHINA, thinks of other ways to use shark fins!!!! And we claim to be the most intelligent species, we must have been at the end of the queue when brains, hearts and souls were dispatched….

This is despicable. Stop this Asia

And we humans consider ourselves to be superior to other species. If this were not so tragic it would be pathetically funny. Learning from ones mistakes is a sign of intelligence, obviously we do not so what does that tell ya.

disgusting this is still going on