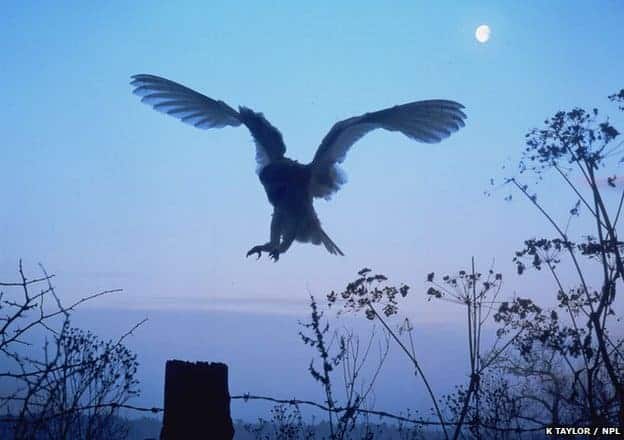 Their screech is one of nature’s eeriest sounds, but barn owls hunt in almost total silence. Now researchers in Germany have revealed how the predators’ wings are specially adapted to allow noiseless flight.

Their supreme stealth is thanks, largely, to their ability to fly so slowly – with relatively little beating of their wings. And the shape and size of the owls’ wings enables this very slow flight.

Dr Thomas Bachmann from the Technical University Darmstadt in Germany recently presented his study of barn owl wings at the Society for Integrative and Comparitive Biology’s annual meeting in Charleston, South Carolina.

He explained to BBC Nature that barn owls were highly specialised nocturnal hunters. “They hunt mainly in the dark, so visual information is very limited. “They use acoustic information to locate their prey.”

Their silent flight helps them listen for the scurrying of the voles they hunt for, and also reduces their chances of being heard by the prey as they approach. To find out how they managed to fly so slowly and quietly, Dr Bachmann examined the birds’ wings in minute detail.

He examined the plumage and took 3-D medical scans of their skeletal structure. The wings’ most important features, he explained, were the high curvature or “camber” of the wings. This curvature means that each wing beat produces more lift.

This is because, Dr Bachmann explained, the air flow is accelerated over the upper surface the curved wing. “So the pressure drops,” he said. “[And] the wing is sucked upwards into the lower pressure on the upper wing surface.”

The feathery edges of each wing are also extremely fine – reducing any loud turbulence during flight, explained Dr Bachmann. “Friction noise between single feathers is also reduced [by] their velvety surface,” he told BBC Nature.

In fact, Dr Bachmann explained, “all the body parts of the owl are covered by very dense plumage – owls have more feathers than other similarly sized birds”. This soft, dense plumage absorbs other sounds the birds make as they fly.

Dr Bachmann and his team say their eventual aim is to use the structure of barn owl wings to inform the design of new, much quieter airfoils for the aviation industry.

“We’re trying to understand the basic principles… that influence the airflow over aircraft and thus reduce noise,” he explained. “[But] we are far away from that point. Maybe in 20 years we can present such a wing. “Until then, we will conduct many more experiments on owl wings.” The structure of barn owls’ wings could provide a guide for the design of quieter and more efficient airfoils.