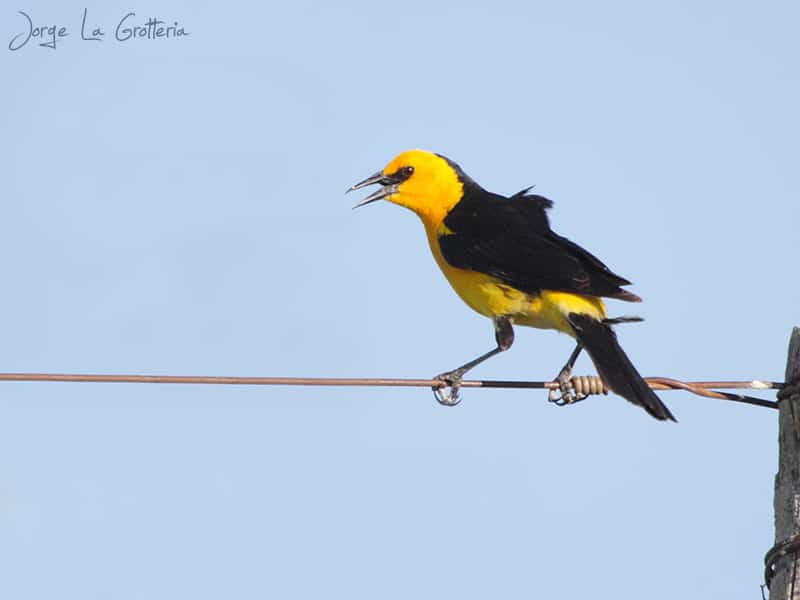 Autumn have just arrived in Central East Argentina, opening a strange period of time for birding in the area. Some of the summer visitors have already gone to the North, some others are still here, and also some of the winter visitors (who come from their breeding areas in Patagonia and Western Argentina) are arriving.

This results in a very diverse time for birding but with less number of species compared to summer (because there are less species coming to spend the winter here than the species leaving to the North).

A couple of weeks ago I had an outing to Southern Entre Rios, one of the most diverse places for birding near Buenos Aires. The area located 2 and a half hours trip by car to the North of BA is among Argentina’s birding hotspots for many reasons: it preserves patches of the Espinal (thorny) forest, open fields of Pampas grassland and big marshland areas with water streams, rivers and lagoons. The combination of these different ecosystems explains why in a full-day birding trip the checklist at the end of the day often exceeds 100 species. 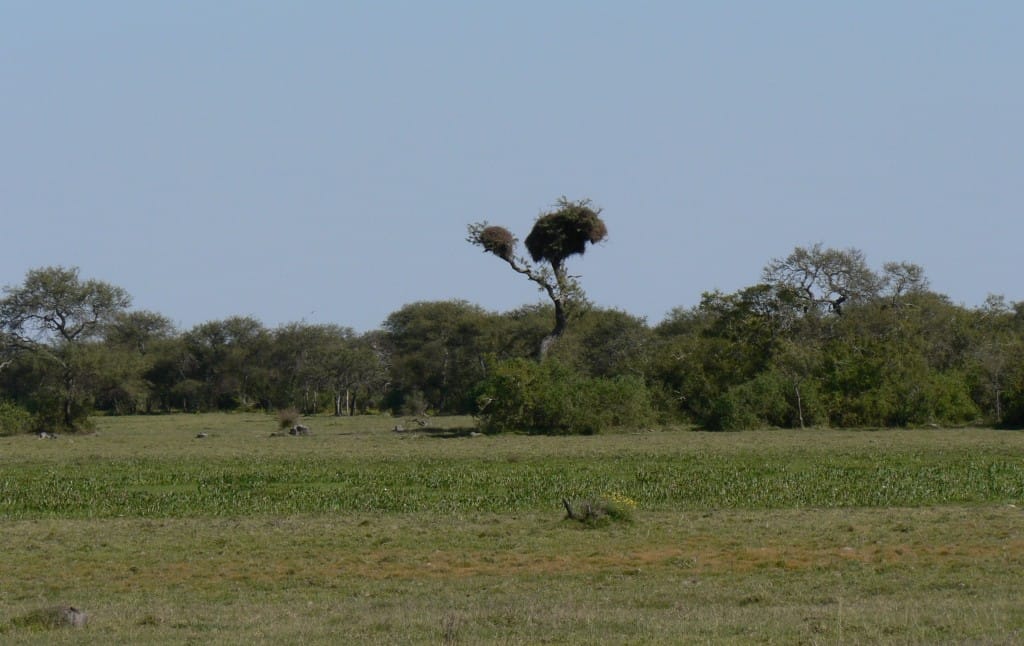 But Southern Entre Rios isn’t just a place with a lot of species, the real importance of it is that it still gives refuge to some of the most rare and endangered birds of the region. A few examples: Black-and-white Monjita (Xolmis dominicanus), Chestnut Seedeater (Sporophila cinnamomea), Rufous-rumped Seedeater (Sporophila hypochroma), Marsh Seedeater (Sporophila palustris) and the declining Saffron-cowled Blackbird (Xanthopsar flavus).The best moment of the year for the seedeaters is right before the summer (they are summer visitors), but the Monjita and the Blackbird are residents although very scarce in the area.

This time we visited the area looking for some of the specialties, but with a time limitation that didn’t let us cover the complete rural trail birding circuit, so we drove directly to were the most interesting birds are. We left BA early in the morning, and around 9 am we were already in the area. Along the way we found many of the typical Pampa’s birds, like the Greater Rhea (Rhea americana), with one male in middle of the field. The marsh areas were full of aquatic and related birds, such as the Maguari Stork (Ciconia maguari), Southern Screamer (Chauna torquata), White-faced Ibis (Plegadis chihi), Snail Kite (Rostrhamus sociabilis) and the large Savanna Hawk (Heterospizias meridionalis), among others. 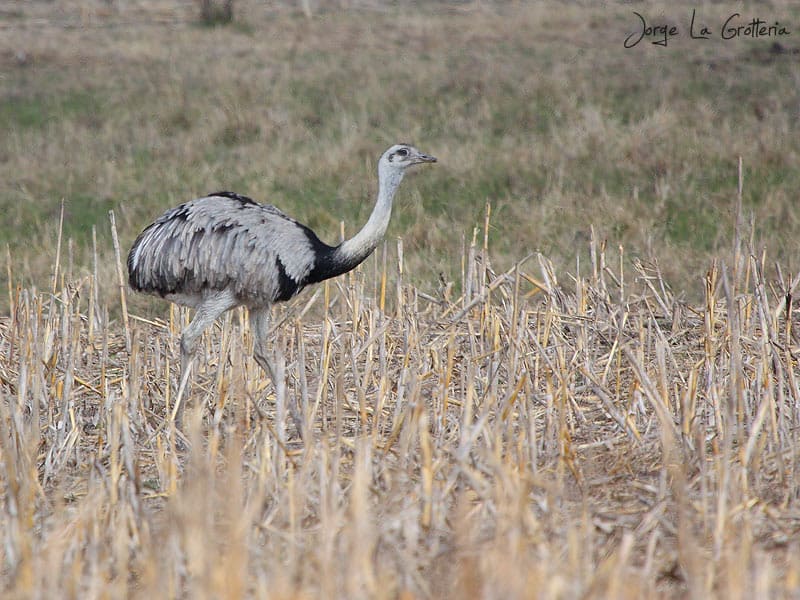 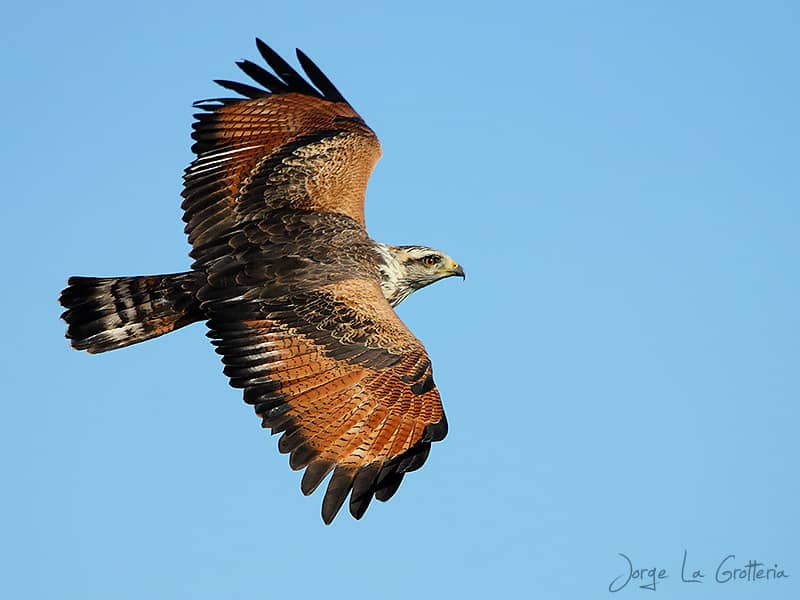 Once in the rural roads, we found many common passerines until we entered to a private field, with the owner’s permission. Inside the property, which is being used for cattle ranching, we found a Spotted Nothura (Nothura maculosa), and the first Black-crowned Monjitas (Xolmis coronata) of the day. This last species is a winter visitor in the area, where it spends the fall and winter until going back to North Patagonia, where it breeds. Also, in all the area we saw many White Monjitas (Xolmis irupero), which are very conspicuous birds and easy to recognize from the distance, for their almost totaly white plumage. This is a resident, common in much of Northern and Central Argentina, but rarely found in Buenos Aires city and surroundings. 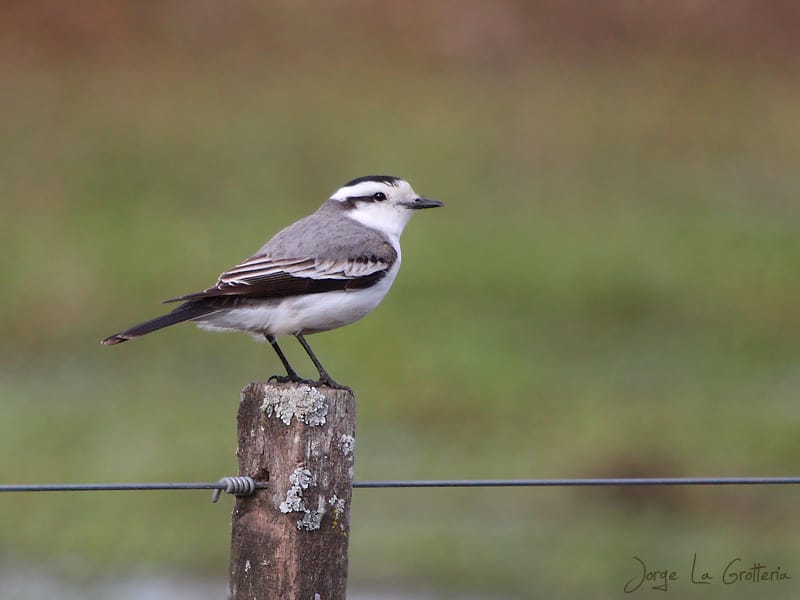 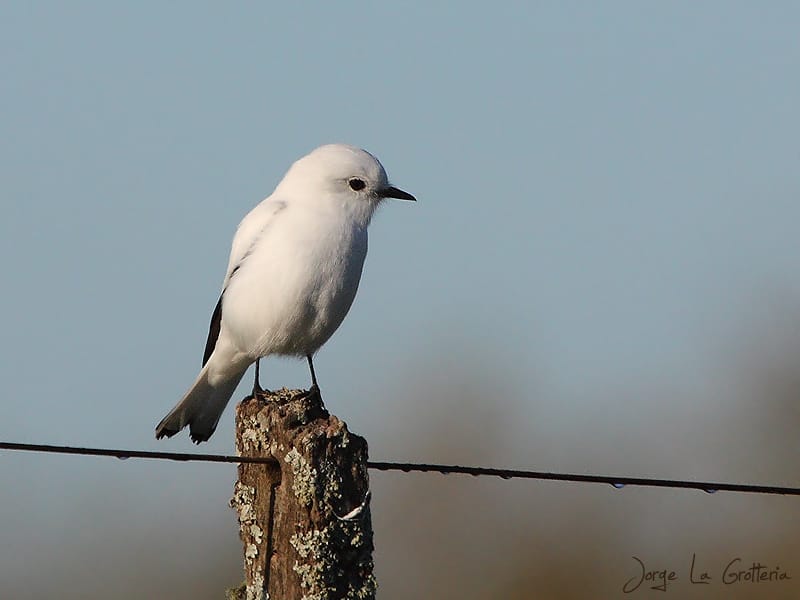 After that stop, we continued the trip towards a particular spot, where we knew we would have many chances to find the most wanted species of the day: the endangered Saffron-cowled Blackbird. Once we arrived to that place and got off the car, we were welcomed by a couple of Rufous-capped 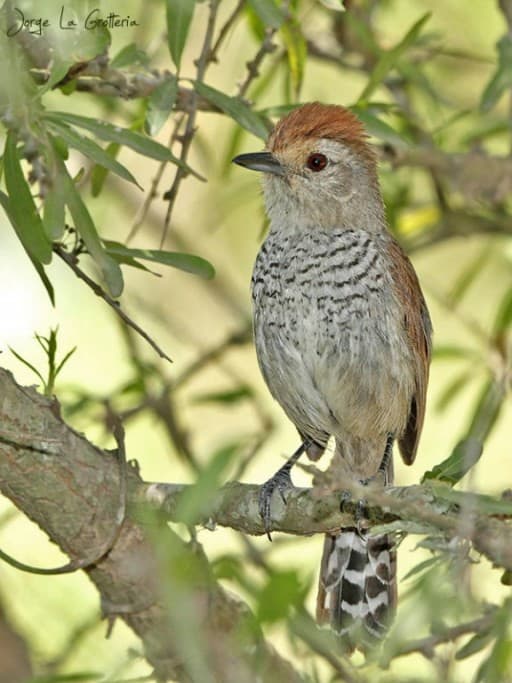 Antshrikes (Thamnophilus ruficapillus), a few meters away from us. We started to walk to this much wanted spot, finding in the way, among others, another remarkable bird like the White-fronted Woodpecker (Melanerpes cactorum).

A good sign was to find a flock of the relative species to the blackbird, the Brown-and-yellow Marshbird (Pseudoleistes virescens), wich is often found together with its related cousin. And then we saw them.. four beautiful Saffron-cowled Blackbirds flying over us! then, even more: in just a few minutes we saw how a bigger flock of this birds landed in the same field, flying up again and landing several times, and towards us.

This beautiful show is now rare in most of the species distribution range because of the destruction of the habitat (Pampa’s grassland and Chaco’s savanna) and the fact that they are being hunted to sell as cage birds, so everytime I see this I feel very lucky. 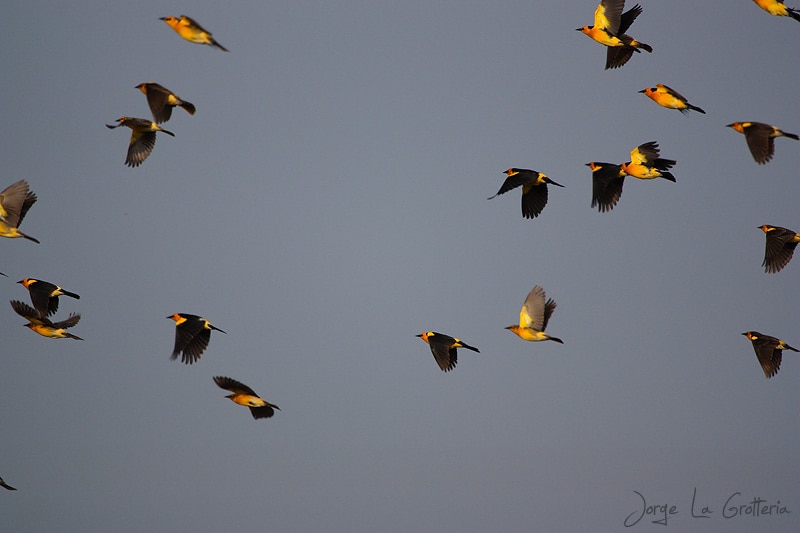 In the same field, we heard the calls of the Red-winged Tinamou (Rhynchotus rufescens), much more heard than seen, except for late in the afternoon, when sometimes they can be seen flying very noisily and low. After having lunch by the road, we headed to the last stop near the town of Ceibas, because we needed to go back to BA early. On the way, among many others, we found another winter visitor: the White-banded Mockingbird (Mimus triurus). 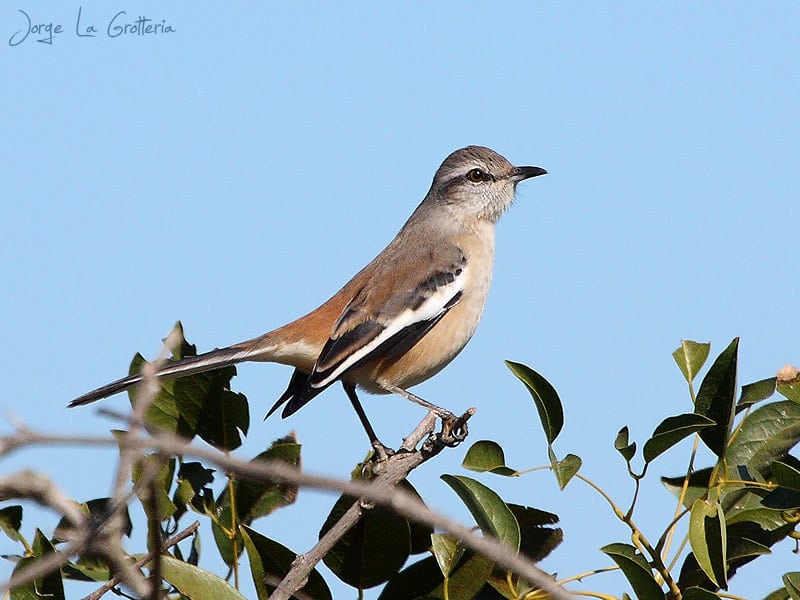 In Ceibas we didn’t have enough time for touring the complete rural path, so we just walked a total distance not bigger than 400 meters, but in such a short hike we found almost all the species we wanted to see there. The area preserves a good patch of Espinal forest which is great for finding passerines, especially Furnariids, but also tyrants, and some non passerines like woodpeckers and more. 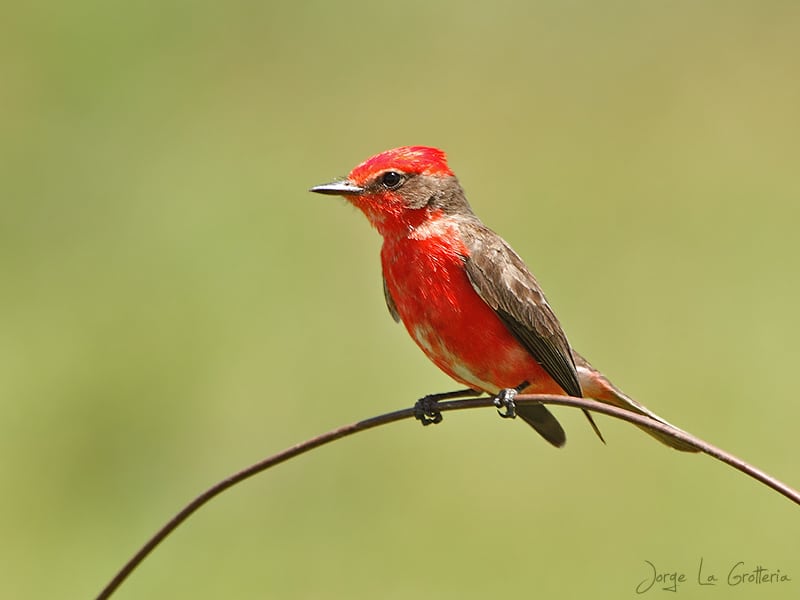 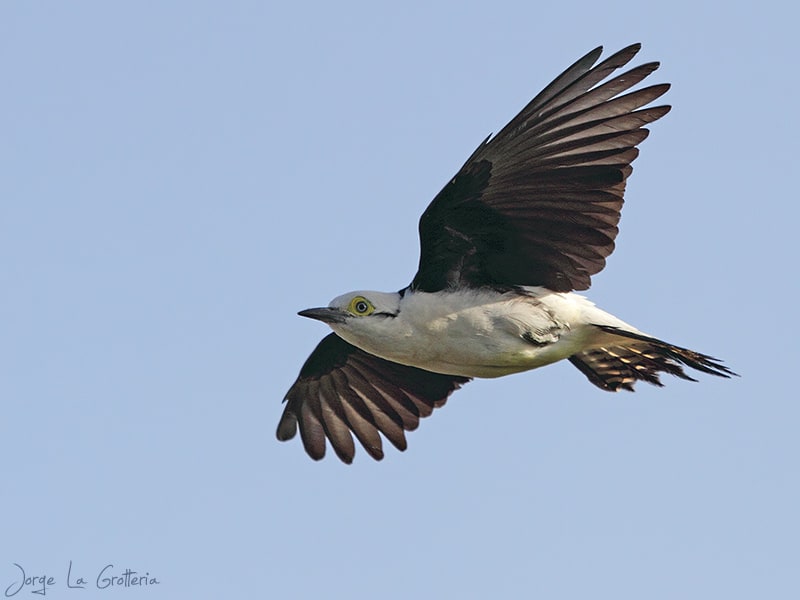 After that, we needed to go back to Buenos Aires. Despite of our brief time in the area, we finished the trip with 90 species recognized, and the privilege of having watched some of the jewels of the region, including this incredible mix of summer and winter visitors. In a couple of weeks the bird species composition will change significatively, opening a new and very interesting birding season.

Check my website www.birdingbuenosaires.com for more information about birdwatching in Buenos Aires city and surroundings, and my friend’s website www.ecoregistros.com.ar with great pictures and records of birds and other fauna in Argentina and other countries (it’s in Spanish, but you can use the website’s browser typing the names in English, or latin names). Good birding!

I'm a field naturalist specialized in ornithology and ichthyology, with expertise birding in many parts of Argentina, and a tour guide at the Argentine Museum of Natural History "Bernardino Rivadavia" (Buenos Aires, Argentina). I often visit the urban reserves of BA and the birding hotspots near the city, having the opportunity of finding rare and endagered birds, or observing new interesting behaviors. I also have developed the website "Birding Buenos Aires" to promote birdwatching in the area and offer my services as a birding tour guide.

I'm a field naturalist specialized in ornithology and ichthyology, with expertise birding in many parts of Argentina, and a tour guide at the Argentine Museum of Natural History "Bernardino Rivadavia" (Buenos Aires, Argentina). I often visit the urban reserves of BA and the birding hotspots near the city, having the opportunity of finding rare and endagered birds, or observing new interesting behaviors. I also have developed the website "Birding Buenos Aires" to promote birdwatching in the area and offer my services as a birding tour guide.

Thank you Ken! This is an exciting birding season in the area, since we are waiting for the winter visitors, which I think they are already here now. It’s a pleasure to be part of this wonderful Milti-Author Wildlife Blog

Marcelo, outstanding images and an interesting and informative article. Strange that you’re now experiencing “Fall”, whilst we’re beginning to enjoy springtime. It’s very good to have you “on board” as our first wildlife representative from Argentina. Looking forward to follow your blogs with great interest.