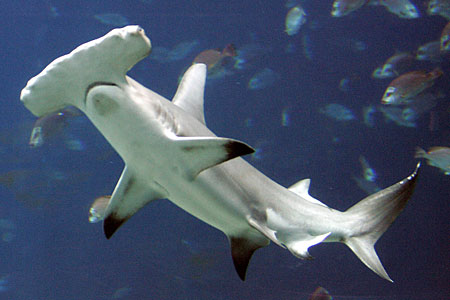 By outward appearances, the scalloped hammerhead and its newly discovered twin are almost impossible to tell apart

Live sharks are hard creatures to count. Typically, to get a sense of whether a species is flourishing or dying out, scientists have to keep track of how many wind up dead: If fewer sharks are ending up in fishermen’s nets, there’s a good chance that there are fewer sharks in the ocean. While some specimens are found whole in legal hauls, many others turn up in pieces at market, illegally caught and unrecorded, so DNA tests are crucial for proper surveying. In 2005, marine biologist Mahmood Shivjiand some of his colleagues at Nova Southeastern University in Florida were testing a new method they’d developed to genetically identify shark parts. When they ran their test for scalloped hammerheads, it came back positive on all the samples — except several they’d collected from sharks found in waters around Fort Lauderdale. That’s when they realized they’d stumbled on a completely different species.

Sure enough, in 2006, researchers at the Universityof South Carolina who had tested the tissue of 76 scalloped hammerheads from around the world came back with the same resultthere was a scalloped-hammerhead lookalike dwelling in the western North Atlantic, with nearly identical undulations along the front of its flat head. The “cryptic species,” as scientists call it, has fewer vertebrae than its scalloped cousin, but outwardly the two appear to be twins. Only DNA tests show that the species have very different lineages, the cryptic line having diverged from the scalloped some 4.5 million years ago.

Last month, Shivji and others published a new studyabout the cryptic species, which doesn’t yet have an official name. They found that its range extends at least to the western South Atlantic, and they called for governments and conservation organizations to formally recognize the cryptic shark as a unique species. There’s a good chance that both the cryptic and the scalloped populations are in real trouble. Researchers estimate that over the past 30 years, overfishing has decreased scalloped hammerhead numbers in the westernNorth Atlantic by nearly 85 percent. And now, confirmation that the cryptic species not only exists, but is established far beyond the southeastern coast of the U.S., suggests a more dire situation for both species. Shivji estimates that at least 7 percent of the scalloped hammerheads counted in surveys of theU.S.’s Atlantic waters weren’t scalloped at all, but members of this new, even rarer breed.

Overfishing is the most pressing problem big sharks like the scalloped face. Worldwide, humans kill some 73 million sharks per year, largely to fill orders for shark-fin soup — a delicacy that’s in growing demand, particularly in the booming economies of Asia, where more and more people are now able to afford it. Estimates suggest a massive drop in the numbers of large sharks that live along the East Coast of the U.S.– among them the scalloped and great hammerheads, but also tiger, bull, and dusky sharks. This had led to explosions in the populations of species they eat, including rays, skates, and smaller sharks, and, in turn, to major declines in the creatures those species snap up, such as scallops. In the U.S., only Florida prohibits catching the three recognized varieties of hammerhead — scalloped, smooth, and great. However, the National Oceanic and Atmospheric Administration and the National Marine Fisheries Service are currently considering a petition to give the scalloped hammerhead widespread federal protection under the Endangered Species Act — albeit using numbers that, due to the cryptic confusion, likely underestimate the degree to which scalloped sharks are disappearing.

Before the cryptic hammerhead can receive any kind of conservation attention, scientists will have to describe and name it. Joe Quattro, one of the USC researchers who formally identified the new species, says he and his team are tackling that task now, though they’ve only been able to find juvenile specimens to examine. Meanwhile, the general public still tends to think of sharks as fearsome man-eaters that they need protection from, as opposed to vice versa. Shivji says that people who hear “shark” and only think “Jaws”are missing out, especially when it comes to the scalloped and cryptic hammerheads, which aren’t known to attack people.

“These animals are marvels of evolution,” he says. Sharks “have been around since long before the dinosaurs” and have survived in the sea for more than 400 million years. “They’re graceful, they’re sleek, they have amazing senses,” Shivji says, including extra-binocular vision conferred by their wide-spaced eyes. Indeed, he thinks that the physical powers and sheer strangeness of sharks should earn them our respect — and “our protection from the massive slaughter that’s going on around the world.”

The biggest single threat to all shark species today is the relentless killing of them for their fins for use in shark’s fin soup as stated in the article. Over 40% of shark species are considered to be critically endangered with many of the more vulnerable species facing extinction within the next 10 years.