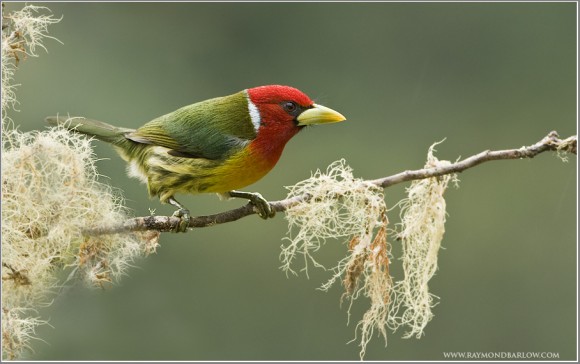 Well, I do not call my tours “The Colours of Costa Rica” for nothing! This bird is definitely a “target species” while we work the southern mountains location.

Remarkably, the Male Barbet is a very calm bird, not really skittish at all. During this photo shoot, I was able to hand hold my camera, and walk in close enough for head shots! With the bright red colours, we need to be extra careful of our exposure, and try to keep the image slightly under exposed to prevent a lose of detail in the reds.

At close range, 400 mm becomes very shallow in depth of field, so the side profile makes this image usable. At about 8 feet, @ f4, the dof is close to .02″., presenting a challenge! So here are the techs used for this image….

I keep my iso as low as possible, as I feel the first step with a quality image is taking care of your pixels. Next, you can see I did stop down to f5.6 to gain some depth of field. These two factors create a shutter speed issue, @ 1/60th of a second, any movement would severely blur the image. Firing a burst of images at 8 frames per second often solves this problem, then from there, hold on tight!

Personally, I never reach out and rest my hand on the lens to reduce vibration. In my opinion, an extended arm on the lens causes vibration, not correcting at all. I keep two hands on the body, so I can better manage the controls on the camera, and make things easier to zone in, and hold everything still while bursting. Also, hold your breath while bursting at low shutter speeds, this helps keep everything as solid as possible.

I am off to India for 3 weeks, leaving on the 25th of April, so I hope everyone has good shooting, and great light while I am gone. If I have some time, I will try to keep this series going! Take care.

If you are interested in seeing more images from any of my workshops, please check out the photo galleries on my website. Later in 2012 we have workshops scheduled in Costa Rica, India, Iceland, Africa, Newfoundland, British Columbia and Tanzania. Check out our tour schedules for more information.

Ray Barlow's passion for capturing birds and wildlife began at the Manila Zoo in 2004. Since then he has established himself as a professional bird and wildlife photographer. Ray is based near to Toronto Canada and hosts photography travel tours and workshops around the world. He goes to places like Yellowstone, Tanzania, Costa Rica, India, and British Columbia. Action photography including animals in chase or birds such as hummingbirds in flight is Ray's specialty.Now being sponsored by Jobu Design gimbal Heads.