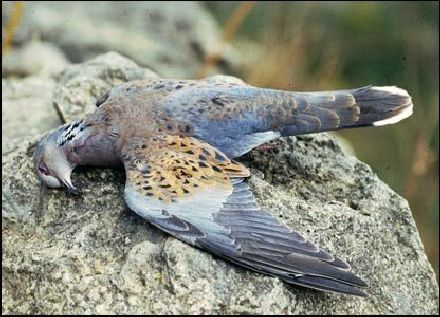 BirdLife Malta today revealed that the FKNK, in a statement posted on its internet forum on the 4th April, a day after the announcement of the spring hunting season, warned its members to “be careful” when reporting their kills to MEPA, “because if everyone catches one bird and sends an SMS, the season will close the next day.”

The statement, posted by the FKNK Administrator, reads: “Everything will be like last year…, except that you can catch 2 birds in 1 day, with a maximum of four in a season. Be careful, because if everyone catches one bird and sends an SMS, the season will close the next day – FKNK”.

Since then, the Hunting Federation, without providing any explanation, has changed the wording to: “… The national quotas are 11,000 Turtle Dove and 5,000 Quail. This may mean that if on the 12th April, there is a minor push in migration and everyone catches the two birds he is permitted, the season will close the next day – FKNK”.

Hunters are permitted to shoot two birds (of the species turtle dove or quail) per day during this year’s spring hunting derogation period and they are supposed to report their kills immediately by sending an SMS message to MEPA.

On February 21st of this year, before the hunters reported their autumn catches to MEPA, FKNK warned its members to “Keep in mind that every Turtle Dove and Quail which is listed as caught in September may reduce the amount we will be able to catch in spring. If you have any problem with filling in the booklet, contact us.”

The Hunting Federation’s General Secretary Lino Farrugia, a few hours after this post, with a follow up message drew the attention of the FKNK members to: “The FKNK is aware that the past hunting season, particularly that concerning the autumn migration for Turtle Dove and Quail, was one of the poorest ever.”

After making this ‘observation’ Mr. Farrugia advised the FKNK members “to report the truth and nothing more than the truth, since the autumn catches shall determine the numbers that can be caught in spring of these two species, irrespective of what derogation the government shall apply.”

BirdLife Malta leaves the judgment of these messages to the Maltese Tax Payers as well as the European Commission officials.

This article was written by Birdlife Malta