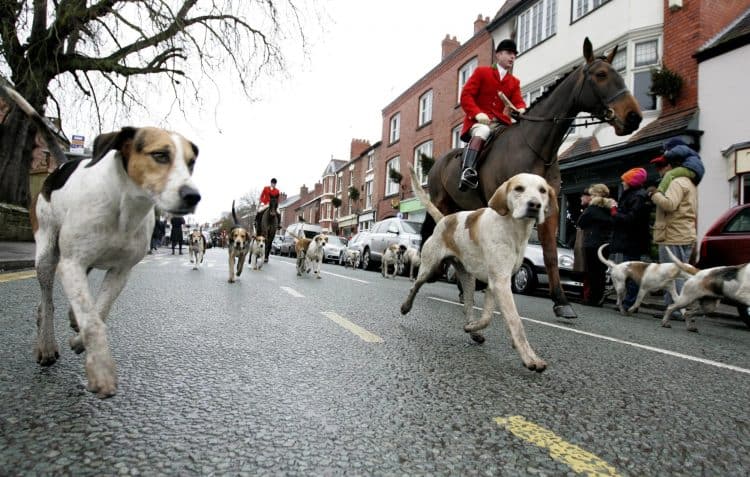 A prominent hunting club has been dealt a blow after being rumbled for holding its Boxing Day meet and collecting money without the required licences. The Cheshire Hunt was also found to have not submitted a health and safety assessment for the 250 year tradition on Tarporley High Street, in front of the Swan pub.

For the first time, police stood by this year to make sure participants didn’t take up their usual spot for locals to wish them luck. A Freedom of Information request submitted by animal rights campaigners Cheshire Monitors revealed the club had never asked the council for relevant permissions this year or last.

But a spokesman for the group says two members of Cheshire West and Chester council told him they’ve always held their event without asking for the go-ahead. He told Metro.co.uk:

‘The people of Tarporley traditionally come and see them off as they go off to hunt.‘There was a lot of agro last year, there was a big demo, it was very, very dangerous. ‘It got me thinking, if something happened, there’s a lot of small children there, if something happened with one of these horses, and the horses are very skittish, who would be to blame? ‘I spoke to two councillors who confirmed that as far as they’re aware, there have never been any permissions granted, it’s just “tradition”.’

The spokesman, who asked not to be named for safety reasons, said the hunt has now been forced to move to a ‘scrappy piece of private land’ in the wake of the FOI request. He added:

‘It’s really symbolic for them, they’ve been forced to do that, they’re so resistant to change which they’ve proven this year. They’re definitely feeling hurt. ‘They had a lot of sabs (saboteurs) with them after they set off. I don’t think they got any real hunting at all yesterday. ‘I think there was some agro. I know the police were called out a number of times and there was aggression between the sabs and some supporters.’ ‘The hunt was really, really, really angry yesterday. The whole day was ruined’.

Fox hunting was banned in England and Wales under the Hunting Act 2004. Drag hunting – where hounds are trained to follow an artificial animal scent – is still legal, but campaigners say it leaves a loophole allowing dogs to continue ripping foxes to shreds, which huntsmen can say was an ‘accident’. Rather than disrupting events on the ground, Cheshire Monitors says it focuses on the ‘bigger picture’ of hunting reform, such as meeting with MPs and lobbying.

Since 1980 Prince Charles has been a patron of Tarporley Hunt Club, who meet in the Swan pub, which has a hunt room full of centuries old memorabilia. But according to Cheshire Monitors, general support for hunting is dwindling among locals year after year. The 45-year-old spokesman, who lives three miles from Tarporley, said:

‘To go to what they are now. They’re looking pitiful. ‘I think people are just becoming more aware of what hunting is all about, what actually goes on. ‘There’s probably slightly more support for the hunt amongst rural areas but it’s not a massive difference if you polled people on it.’

The campaigner also dismissed the idea that fox hunting helps keep population numbers down as ‘a myth’. He said:

‘I think a lot of farmers they’re becoming more informed that actually, the way things are going, we need to be protecting wildlife we all need to be respectful of wildlife. ‘Farmers will say if there’s a problem-fox and it’s persistently coming and taking their chickens or whatever, that they would shoot them. They don’t enjoy it and they don’t want to do it. ‘They will do what they can to avoid that, they will try to move the fox on or they will try to protect their chickens better. They wouldn’t dream of inviting the hunt along to rampage on their land to kill one fox.’

The Countryside Alliance’s Polly Portwin disputed that support for the Cheshire Hunt was falling. She told Metro.co.uk:

‘Due to the large crowd expected on Boxing Day this year, and to ensure the safety of their staff and members of the public, the Cheshire Hunt chose to host their meet in a field by Tarporley Church which is just off the High Street. ‘This enabled the large crowd to engage with the hounds and horses much more easily. ‘There was never any intention to meet specifically in the High Street but by hosting it where it was held, the hunt still rode right through the High Street when they left the meet and were given a wonderful send off.’

Cheshire West and Chester Council have been contacted for comment.

This article was first published by Metro on 27 December 2019. The practice of hunting is in no way supported or condoned by Focusing on Wildlife. The article has been re-published in order to highlight and condemn this cruel and abhorrent practice, which should be classified as wildlife crime.