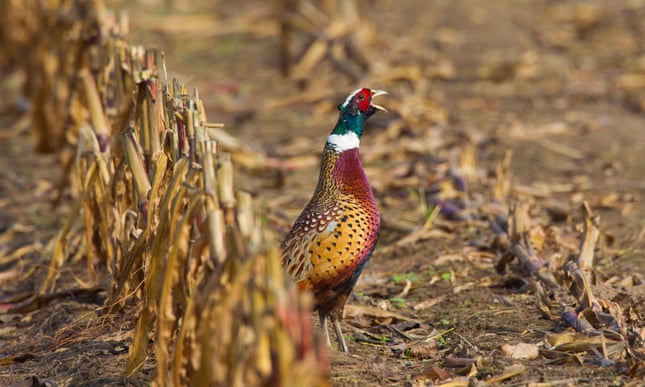 Out of breath and panting heavily, I breasted the summit of the Lion’s Haunch, paused, then turned, slowly. A stiff pull up a frozen path through low gorse had brought me to the lesser peak of Arthur’s Seat, the extinct volcano that looms above Edinburgh.

I stopped to feast on the view, my gaze sweeping along the Firth of Forth, out to the reddish-orange burn of sunrise over the Pentland hills and back to the twinkly lights of the city.

My descent had barely begun when I shocked a pheasant out of its bed of thorns. It exploded grouse-like from gorse, tail feathers quivering, and my first startled thought was: this is a wild bird.

Three mornings later I was back in one of the pheasant pamperlands of southern Britain, where the bird is little more than free-range livestock.

The weight of pheasants raised and released in the UK is greater than the total weight of all wild bird species put together. Numbers set free locally last year were more than double the human population of the nearby town.

Cuk-cuk calls from out towards the wooded ridge and tyre tracks through sodden grass led me to a sloping field on a big shooting estate. A summer-planted strip of maize looked stripped of seed, but on two sides of the field were the big bird feeders.

Blue barrels the size of water butts were spaced out, each with a tray at its base brimming with seed that constantly refilled from the container above.

I could see from the path that the nearest seed hoppers were twinned with off-white water troughs cut from the bottom of a plastic drum.

A gate took me into the adjacent field of jittery bullocks, each animal bolting a little at my approach.

They were not the only timorous beasties. I had not spotted it out in the open, in the middle of the field, but it had seen me.

When I had drawn too close, the pheasant bolted in a volley of indignant clucks. I saw the same quivering tail feathers I had seen in Scotland. The same bird, living a very different life.

This article was first published by The Guardian on 27 November 2019.