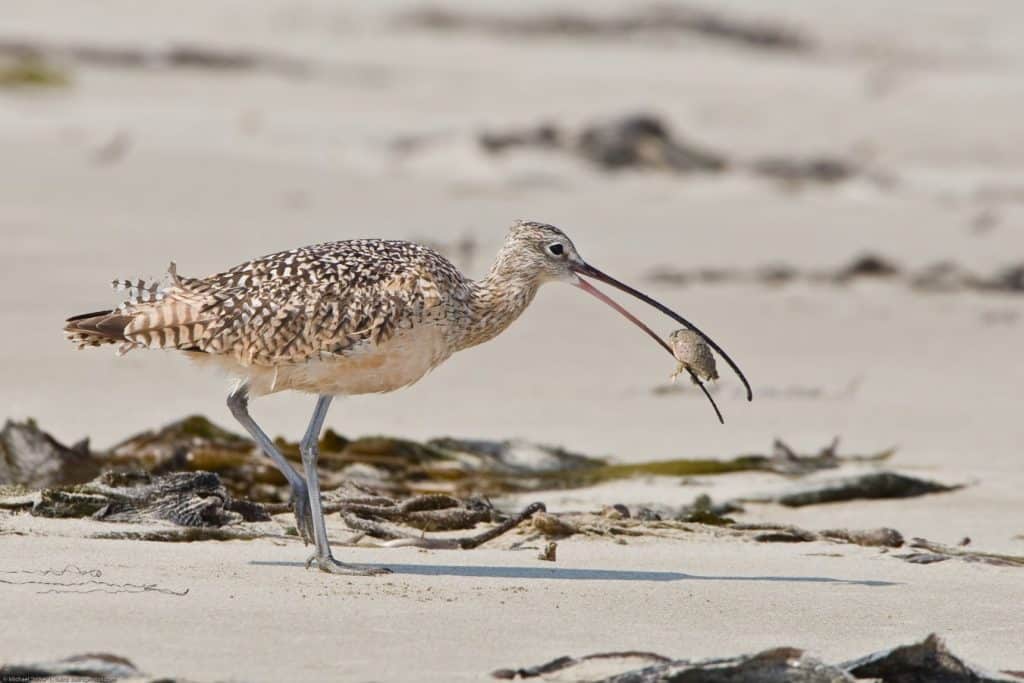 To the layman, the curlews are a shy, unassuming family of birds. Their mottled-brown plumage makes for effective camouflage against their marshland and mudflat feeding grounds, meaning they can go about their business unnoticed, prying out invertebrates such as ragworms with their purpose-built curved bills.

But if, like the curlews, you take time to dig beneath the surface, you’ll discover that they are beautiful and remarkable birds.

The Numeniini are a tribe of large waders consisting of the curlews, whimbrels, godwits and Upland Sandpiper Bartramia longicauda.

Indeed, one such member, the Bar-tailed Godwit Limosa lapponica is holder of the world record for the longest non-stop journey without feeding of any animal – satellite tagging has shown that birds from one population take eight days to fly from breeding grounds in Alaska 11,000 km to New Zealand every year.

Perhaps it’s their wide range lulling us into a false sense of security that means they have been a little overlooked by conservationists until now. Or maybe it’s that their camouflage is a little too effective. Whatever the reason, it’s time for the curlew to be counted, because an eye-opening new study reveals that they could be one of, if not THE, most threatened group of birds on our planet.

The paper, produced in collaboration with the RSPB (BirdLife in the UK), British Trust for Ornithology (BTO) and the International Wader Study Group, and published in the journal Bird Conservation International, collated the views of over 100 wader experts from around the world, who assessed the threats faced by these species across their migratory flyways. Their conclusion: seven of 13 species – or over half – are now threatened with extinction.

Indeed, two species of curlew may already be extinct; the Slender-billed Curlew Numenius tenuirostris, last spotted with confidence in 1995, which once migrated between the Mediterranean Basin and its breeding grounds in Siberia; and the Eskimo Curlew Numenius borealis, which once travelled between Canada and South America, and is almost certainly a goner, having not been seen with certainty since 1963 (and not in South America since 1939).

The plight of the Eskimo Curlew has strong parallels with the far-wider publicised extinction of the Passenger Pigeon Ectopistes migratorius. The shorebird once numbered in its millions, but widescale hunting and habitat loss in its spring staging areas in the Rocky Mountains has led to, if not the total eradication of the species, then at least its decimation to the point where if it still exists, it does so as a tiny population in some uncharted corner of the Canadian wilderness.

While the hunt goes on for traces of these Critically Endangered species, the paper highlights that attention too should urgently be given to the threats faced by the species we know for sure are still among us.

The study discovers that overall probably the most serious threats to the future of curlews and their allies, is the habitat loss or degradation of the coastal wetlands they depend upon to roost and feed across their non-breeding range, including as refuel stopovers during their epic migrations.

While the Numeniini and other waterbirds are encounting this threat all across flyways in Central and Atlantic America, and the East Atlantic, this problem is particularly acute in Asia, a part of the world which is experiencing high levels of coastal development. As a result, a quarter of vital mudflat habitats in the Yellow Sea have been lost since the 1980s, and most of the remainder are badly-degraded, leaving at least 27 species of migratory waterbirds, which depend on these pitstops to break up their epic journeys, at risk of extinction. Besides the Bar-tailed Godwit (assessed as Near Threatened by BirdLife for the IUCN Red List) mentioned above, this number includes the likes of Slender-billed Curlew Numenius tenuirostris and Far Eastern Curlew Numenius madagascariensis (Endangered), the latter of which the largest wader in the world, and the closest to following the Eskimo and Slender-billed Curlews on the downward curve towards extinction.

The loss of these habitats – together with illegal and unsustainable hunting – makes the East Asian-Australasian flyway one of the most dangerous routes for migratory birds in the entire world. BirdLife Australia is already supporting the Australian government in the implementation of an intergovernmentally agreed flyway action plan for this species, under the East Asian Australasian Flyway Partnership and Convention on Migratory Species. Visit our campaign page to discover what else BirdLife is doing to protect these embattled species, and how you can help.

In Europe and North America, the problem appears to be more on the breeding grounds where land use changes, especially agriculture and forestry, and increased fox and crow predation, appear to be driving the declines, especially in the British Isles, which, along with Finland and Russia, hold the bulk of the world’s breeding population of Eurasian Curlew, and the Netherlands which is the most important source of the nominate race of Black-tailed Godwit Limosa limosa.

Through the African-Eurasian Waterbird Agreement of the United Nations Environment Programme, intergovernmental action plans are being implemented for both of these species, coordinated via international working groups. The one for the godwit is coordinated by the Dutch Government with involvement from VBN, BirdLife in the Netherlands, whereas that for the Curlew is coordinated by the RSPB, BirdLife in the UK. The RSPB is also leading a major national recovery programme for the species.

These threats, left unchecked, and together with other identified dangers – which range from pollution to climate change to invasive species and human disturbance – could see this family of birds slip towards extinction. Indeed, for a couple of their members, it may already have happened.

“These large waders with their heart-stirring calls that are an evocation of the wild, are one of the very most threatened groups of migratory birds on earth” says Nicola Crockford, RSPB (BirdLife in the UK), and co-author of the paper. “We may already have lost two of the 13 species and we can and we must ensure that urgent, concerted action is taken to prevent any of the remainder from reaching the brink”

The paper identifies a number of actions that need to be taken to protect these birds including, besides addressing coastal wetland loss and degradation and increasing breeding success in the west; the monitoring of both breeding population trends and land-cover change across their range, and better protection of key non-breeding sites, particularly across the East Asian-Australasian Flyway.

Oh, and in case you’re wondering, the name Numeniini is beleived to be derived from the Greek for new moon, which does describe the bill shape. Let’s hope that conservation efforts are sufficient to ensure that this charismatic family of long-distance waders aren’t in their twilight years.

This article was first published by BirdLife International on 07 Mar 2017.

The bird authorities know what the problems are but they won’t do or say anything against them.