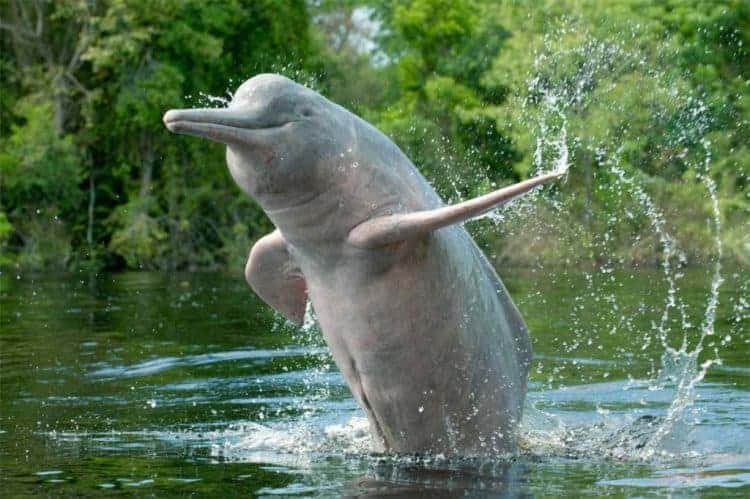 A dam-building boom is underway in the Amazon. More than 400 hydroelectric dams are in operation, being built, or planned for the river’s headwaters and basin.

But little detailed knowledge exists as to the impacts of dams on specific species, or as to the best mitigations to prevent harm.

A recent study that tries to fill in that knowledge gap zeroes in on Brazil’s river dolphins. It found that as many as 26 dams could negatively impact dolphin populations and their prey.

The research, led by Dr Claryana Araújo of the Federal University of Goiás, Brazil, focused on two freshwater species: the Amazon River Dolphin, or boto (Inia geoffrensis), which is sometimes famously pink; and the Tucuxi (Sotalia fluviatilis).

The river dolphins of South America are charismatic emblems of rainforest biodiversity, and have captured the public imagination. Swimming in rivers, lagoons, and among submerged tree trunks in flooded forests to chase down prey, they can be found as far inland as the upper reaches of Amazonian tributaries, more than 2,600 kilometers (1,615 miles) from the Atlantic Ocean.

Despite their status as flagship species in the region, both are classified as Data Deficient by the International Union for Conservation of Nature (IUCN) due to a current dearth of data. No one knows how many exist in the wild, or population trends over recent decades, and uncertainties remain regarding their ecology, and major threats to the species. This lack of baseline data leaves scientists and governments in the dark regarding the conservation measures needed, and puts the animals at greater risk.

Filling in the knowledge gaps

For Araújo, the study of the dolphins arises out of a life-long dedication to these animals. “Since [I was] a young girl, I have been fascinated by this species and have a particular interest in the animals from Central Brazil where I was born and raised,” Araújo told mongabay.com.

“Even with very limited funding, I have been working with the botos of central Brazil and struggling to make a difference in their conservation,” she said. “Many times, I have conducted field-work alone, spending hours observing the botos and learning the importance of protecting their habitat for their long-term persistence.”

Araújo’s study, published in the journal Oryx, examines the overlap between the ranges of both dolphin species and existing or planned dams. Two kinds of impact were recorded as “present” or “absent” for each dam within the dolphins’ range: whether the obstruction fragmented the population, and whether it would affect prey populations.

A dam falling within the dolphins’ range scored on both counts; a dam located upstream of the dolphins’ range scored only for the impact on prey. These impacts were then summed for each dam, and within each watershed, thus identifying where impacts would be greatest. The research team hopes that their straightforward methodology will be applicable to other aquatic species in need of a similar rapid impact assessment as dams rapidly develop.

For the Amazon River Dolphin, 13 dams already exist within their range, 3 more are being built, and 7 are planned. The majority of dams fall within the Araguaia-Tocantins and Amazon watersheds, with only 2 in the North Atlantic drainage. All the dams within the Araguaia-Tocantins impact both dolphins and their prey, making this the region with the highest impact on the species overall. However, when the proportional size of each region is taken into account, and the impact is rescaled by geographical area, the relatively small North Atlantic watershed has the highest relative impact.

For the Tucuxi, the impact is lower, primarily because the species has a smaller range, and is not found throughout the Araguaia-Tocantins watershed where many dams are located. Within this species’ range, 3 dams are already built, 3 are under construction, and 2 are planned. The majority of those dams affect prey species, rather than fragmenting the dolphins’ range, and 5 of the 8 dams are within the Amazon watershed.

The Amazon River Dolphin is already separated into eight groups by dams on the Tocantins River, and this could increase to twelve if all those planned go ahead. Fragmentation isolates sub-groups, reducing or eliminating gene-flow between them, and making the population more vulnerable to future environmental impacts, such as those brought by climate change, disease, or more dams.

One need only look to Asian river dolphins to see the potential fate of highly fragmented populations. Fragmentation and habitat degradation caused by dams have contributed to the decline of both the Ganges River Dolphin and the Yangtze River Dolphin, with the latter now likely to be functionally extinct. “The river dolphins of Brazil are not as threatened as those of Asia, and thus much can still be learned from research on the effectiveness of [dam] mitigation measures,” the researchers state in their paper.

While the recent dolphin study makes a start, it does not look at the long-term effects that such extensive fragmentation would have on species populations. “This and many other impacts are still very uncertain. We would need to monitor the subpopulations over a longer period to better understand the potential impacts,” Araújo told mongabay.com.

“Besides the more obvious impact of population fragmentation, we need more studies to understand possible impacts on demography, behavior and shifts in distribution. The lack of robust baseline data compromises our ability to evaluate the full impacts and highlights the importance of basic and long-term research,” she said.

The effects of dams on dolphin prey species is even more complex, partly due to the fact that fish concentrations are often higher immediately downstream of dams, which can result in increases in dolphin densities. “Many researchers agree dams may provide some possible immediate short-term benefits [for feeding dolphins], such as concentrating fish and thus facilitating foraging,” Dr Enzo Aliaga Rossel, a member of the IUCN SSC Cetacean Specialist Group for South American rivers, told mongabay.com.

Prey and dolphin populations may also benefit downstream of dams because human activities such as fishing are prohibited in these areas due to safety concerns. But poor enforcement of these restrictions, coupled with the close proximity of some dams to urban centers, may make dolphins more vulnerable to human disturbance, the study authors explain.

Aliaga Rossel points to longer-term negative effects on dolphins and their prey in addition to changes in hydrology, sedimentation and the accumulation of contaminants. “[D]ams affect fish that have their annual spawning migrations, [which] will affect reproductive behavior and activities of fish, and this will have an effect on dolphins’ diets, and movement patterns.”

The study authors note that: “With Brazil’s current focus on [energy and] economic development, reducing the impacts of hydroelectric projects on riverine dolphins is very challenging.”

The nations of the Amazon region need to carefully consider where precisely they locate new dams, if they want to minimize harm to aquatic species, Araújo concluded. “[That] would be by far the most important way to mitigate threats to the dolphins, and could result in significant reductions of the impacts.”

The study makes even more detailed recommendations: “Wherever feasible, relocation of proposed [hydroelectric] projects to areas with minimal impacts should always be considered. In cases where a dam is proposed downstream of an existing dam and within a dolphin’s distribution, changing to an upstream location could have less impact.”

Araújo argues that much more could be done to improve scientific oversight of new dam projects to reduce potential harm: “Significant changes in the process, including the planning stages, mitigation, the EIA [environmental impact assessment] review process, and approval, etc., must be done,” Araújo said. “For instance, in order to ensure the EIAs are sound, the EIA itself and its review process should always require specialized expertise on the biology of the botos, which has not always been the case.”

The authors believe that their study is conservative in its risk assessment, as a variety of potential dam impacts, which are hard to quantify, were not evaluated — including the risk of increased disease and exposure to concentrated pollution, and the reduction in habitat complexity around dams and reservoirs, which can diminish prey species diversity. Of course, pressures on dolphins are not limited to the direct and indirect impacts of hydroelectric projects: the animals are often killed by fishermen who perceive them as a threat to fish stocks; fishermen also use dolphins as fishing bait; or the animals die when they accidentally get entangled in fishing nets and gear.

Further studies of South America’s freshwater dolphin population sizes and distributions are urgently needed to determine their conservation status. “We continue to monitor boto populations in the Araguaia and Tocantins rivers, and we are always trying to improve our knowledge on the ecology of this species by studying its distribution, population dynamics and behavior,” Araújo explained. “Long-term research is always an essential part of ensuring conservation is working effectively”.

As part of that on-going effort, IUCN’s listing for both species as “Data Deficient” is currently being reassessed, Aliaga Rossel told mongabay.com, “and hopefully the new classification will be more precautionary.”

Despite the lack of baseline population data for the species overall, several countries have classified the species at the national level. Colombia, Bolivia and Venezuela have listed the Amazon River Dolphin as Vulnerable, while in Ecuador it is listed as Endangered. The Tucuxi has also been listed by several countries. Brazil’s 2014 assessment classified the Amazon River Dolphin as Endangered, and the Tucuxi as Near Threatened. “Each country has its regional problems related to river dolphins, but in general, the threats are common for all the South American rivers,” said Aliaga Rossel.

“These [charismatic] species can stimulate people to be engaged in conservation issues and to understand conservation problems,” Aliaga Rossel said. Their “importance as indicators in these rivers is key, and even though the threats are increasing it is not too late to seek integrative solutions. The participation of locals, and the support from outsiders, by tourism for example, is important to keep these amazing creatures among us.”

This article was first published by Mongabay.com on 15 Dec 2015.