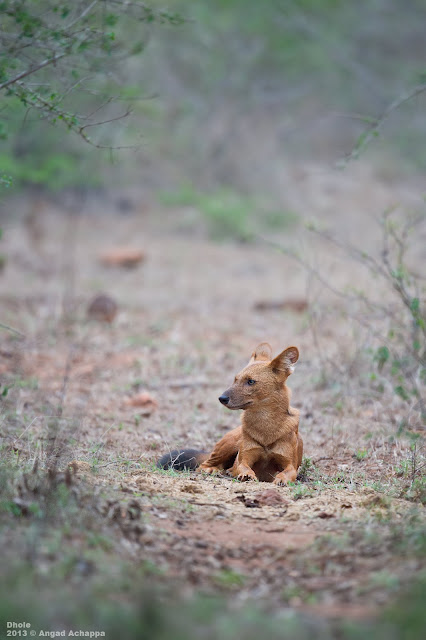 The Dhole, also know as the Indian Wild Dog is one of the most successful hunters from the Indian Forests. They have been placed under the ‘endangered’ category by IUCN due to loss of habitat and possible transfer of diseases from domestic and ferral dogs.

They are highly social animals, and hunt in packs, often chasing their prey to exhaustion. They often start tearing into their prey even before it is dead. Since they often travel in numbers, they are bold enough to take on much larger animals, like gaurs, sambhars and often chase tigers and leopards away.

Here, after finishing an evening safari at Bandipur National Park, while returning to our lodge around 6:30 PM, we came across two dholes sitting right next to the highway. The light was quite low, and I was thrilled at trying out a few High ISO shots with the D3S. Here is one of them.