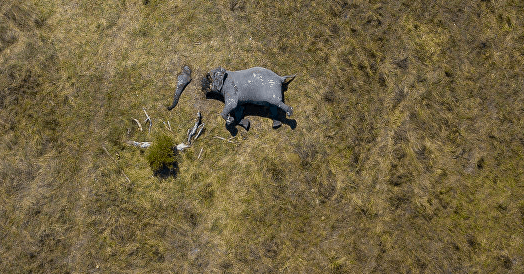 A drone camera has captured a disturbing image of the trophy-hunting crisis: Lying dead on the ground in Botswana is an elephant with injuries that look to have been inflicted by hunters with chainsaws.

Photographer Justin Sullivan captured the picture of the African elephant, whose trunk and tusks appear to have been sawed off, just weeks after Botswana lifted its hunting ban on all species.

Prior to the reversal of the ban, many elephant herds in African poaching hotspots had fled to Botswana.

Elephants Without Borders estimates that elephant poaching in Botswana increased by 593% between 2014 and 2018. Hunters looking for ivory first target older males, who have the largest tusks, before moving on to the matriarchs.

According to National Geographic, this is especially damaging to elephant populations because “the older females are the repositories of the herd’s collective wisdom. The matriarchs are the ones who know where to find water and food.”

And of course, that statistic doesn’t include the elephants killed legally by hunters who gun them down for entertainment. The African Wildlife Foundation puts the number of elephants killed in Africa every year at about 35,000.

Shocking photo highlights plight of #elephants – #poachers used a chainsaw to cut off the trunk and tusks! #Poaching in #Botswana is increasing rapidly, with an estimated increase of 593% in the Northern parts from 2014 – 2018.
https://t.co/ipZ5XBtbhp via @capetownetc

With all the challenges that elephant populations face—including habitat loss, drought, dwindling food supplies, and poaching—hunters can’t argue that these animals need to be killed under the guise of “conservation.”

This article was first published by PETA on 19 July 2019.