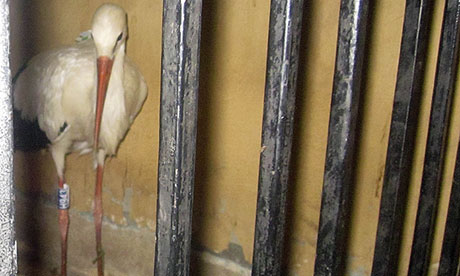 A swan has been detained in Egypt on suspicion of being a spy. Except it looks – in pictures released by the Egyptian authorities, who kept referring to it as a “swan” – like a stork. Perhaps it was wearing a disguise. The bird, allegedly working for the French government, was captured in a heroic citizen’s arrest by a fisherman who spotted that it was wearing some sort of electronic device. Disappointingly, some actual investigation found it was a tracking device used by French scientists studying the bird’s migration patterns. So much for a bird playing the next James Bond.

But the spy swork is not the only wiley animal detained on suspicion of spying. In 2011, a vulture was captured in western Sudan after officials believed it was carrying out surveillance for the Israeli security services – this apparent Mossad agent had a GPS tracker, and wore tags from Tel Aviv University and the Israel Nature Service (again, ecologists insisted they were studying its migratory habits). Before that, reports in 2007 showed that Iran had arrested 14 spy squirrels; the following year, two pigeons were captured near a uranium enrichment facility. It isn’t even just a modern wariness – think of the poor monkey supposedly hanged in Hartlepool during the Napoleonic wars on suspicion of being a Frenchman.

Animal espionage has a hairy history. A German engineer first attached a camera to a pigeon in 1908 to take aerial photographs, which inspired German military intelligence to do the same. Pigeons are still being experimented with – in 2007, scientists in China reported they had successfully implanted electrodes into the birds’ brains in order to fly them like remote-controlled aeroplanes. In the 1960s, the CIA started looking at the possibility of using cats as furry spies, by implanting microphones and transmitters, with the hope that they could be released in and around the Kremlin. Code-named “Acoustic Kitty”, agents planned to test how well the cat worked by getting it to eavesdrop on two men in a park. Unfortunately, the cat was run over by a taxi and the project was abandoned.

Or was it? Questions have been raised over the chancellor George Osborne’s cat, who may or may not be a double agent, after she mysteriously disappeared for three years, then reappeared, and is now regularly found slinking around secretive areas of Downing Street.

In her book, Frankenstein’s Cat: Cuddling up to Biotech’s Brave New Beasts, Emily Anthes covers animals that are being genetically modified, either just because we can or to supposedly improve the lives of humans, but some of the most interesting – and alarming – research has obvious military applications. “We are heading towards a world,” writes Anthes, “in which anyone with a little time, money and imagination can commandeer an animal’s brain.”

This article was written by Emine Saner for the Guardian.