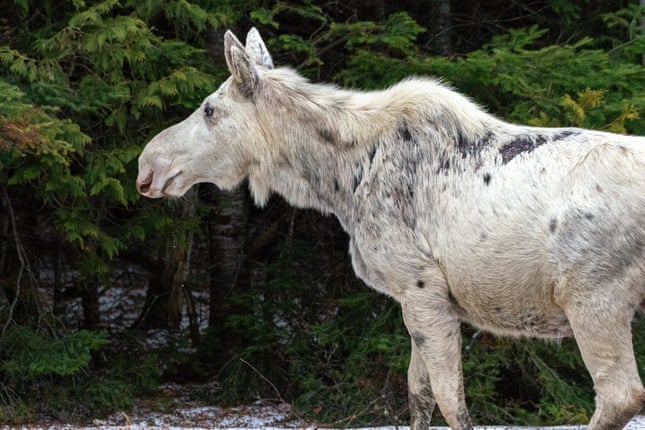 The killing of a rare “spirit” moose in Canada has shocked residents of a northern Ontario community and prompted one First Nations man to offer a reward to anyone who can help officials apprehend the suspected poachers.

Residents around the city of Timmins have long swapped stories of a ghostly white moose population occasionally spotted moving silently through forests of aspen and pine.

But poachers recently killed two female moose, including one white cow. The remains, including their heads, were left discarded along a remote service road.

“Everybody is outraged and sad. Why would you shoot it? No one needs one that bad,” said Chief Murray Ray of nearby Flying Post First Nation. “If you have a license to shoot a cow moose, you could shoot another one. Just leave the white ones alone.”

The moose are not albinos, but get their colour from a recessive gene. Among Indigenous peoples in the region, white animals like bison, raven and grizzly bears, are considered sacred and shouldn’t be harmed.

“It saddens me that somebody would take such a beautiful animal,” said Flying Post community member Troy Woodhouse. “Nobody knows exactly how many are in the area, so the loss of a single spirit moose is one too many.”

Years ago, as he and his wife fished the Groundhog River, Woodhouse spotted a white figure on the tree line. As they approached in their boat, the couple watched in awe as a young white bull moose stood near the homestead of Woodhouse’s grandfather.

“It was a sign that he’s watching over us on the land. It was very special to me,” he said.

Mark Clement, a photographer in the region, has spotted a number of moose over the years. He knows of at least four white bulls – and estimates there could be as many as 30 spread out over the region.

While the white moose have been spotted in the area for more than 40 years, it was only in the last decade that they won legal protections. They are not a distinct species, but throughout the region, signs warn against killing them – the only place in the country where such a law exists.

In 2013, a trio of hunters killed a white moose in the province of Nova Scotia, angering the local Mi’kmaq people. After they realized their mistake, the hunters returned the pelt to the Mi’kmaq so that a multi-day ceremony could be performed – but kept the head as a trophy. The Flying Post nation has also requested the pelt of the latest spirit moose returned to them so that a ceremony can be held to honour the moose.

Wildlife officials have asked the public to come forward with any evidence that could lead to charges. Woodhouse has also offered a reward of C$1,000 ($760).

“I’m a proud Flying Post First Nation member and I just wanted to help any way I could,” he said. “Since I’m so far away, I thought I could donate some money to help bring more awareness and encourage others to voice their concerns.”

News of his offer has spread quickly. A local drilling company has matched Woodhouse’s offer and an animal welfare group has offered C$5,000. The total now stands at $8,000.

“Maybe hunters tried to get one moose and got the other by accident. If a person does come forward and admit what they did, I would put my portion towards any of their legal fees,” said Woodhouse. “There’s so much negativity in the world today. It’s nice to just see some people banding together and trying to turn this into something positive.”

This article was first published by The Guardian on 15 November 2020. Lead Image: A white moose in Ontario. The moose are not albino, but get their colour from a recessive gene. Photograph: Mark Clement/clementphotography.ca.