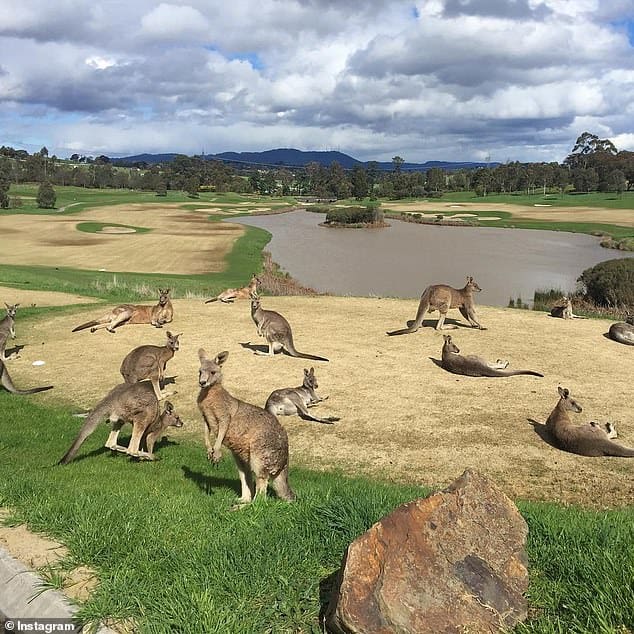 Beloved kangaroos hopping around a golf course have been saved from being shot dead after members stood between the animals and armed hunters.

Heritage Golf and Country Club in Melbourne’s north-east advised neighbours earlier this week that it was in their ‘best interests not to be out after dark’ as it was going to shoot the course’s family of roos – including local legend Big Al.

The plan was to sell the kangaroo meat for pet food, but Daily Mail Australia can confirm a protest of up to 80 angry dissenters on Tuesday convinced the club to stop the killings.

‘We are no longer going through with that contract,’ an employee confirmed on Friday afternoon.

The cull was set to go ahead Thursday evening, engaging locals to express their anger to the country club through protest and social media.

A large group of residents who live around the course, wildlife groups, and other concerned supporters turned up to block the attempted cull.

Dozens of people stood in the way of the shooters hired by the golf course to prevent the slaughter of the treasured marsupials.

Heritage Golf and Country Club general manager Andrew Kenny wrote to the residents confirming the cull was taking place and warning people to stay inside.

‘It is in your best interests not to be out after dark whilst shooting is taking place during these times,’ the letter is signed off.

Several contacted Wildlife Rescue Sunshine Coast to ask if a culling was being carried out.

Manfred Zabinskas, who helped rehabilitate Big Al in 2019 after he injured his arm at Five Freedoms Animal Rescue, attended the protest on Tuesday night after he heard the kangaroo could be in danger.

‘It was such a horrific situation. This cull was going ahead with no consultation with the residents or golfers,’ he told Daily Mail Australia.

‘This is a residential area, it’s a golf course with homes on it, sharing an environment with a natural mob of kangaroos who visit them in their gardens. They love them and the golfers love them.

‘They were going have guests in the restaurant enjoying their meal with spotlights outside shooting the roos.’

Mr Zabinskas and wife Helen nursed Big Al back to health after hundreds of dollars in donations from residents who lived on the course, and said they were devastated to hear he could become ‘dog meat’.

‘They love him so much, they even produced a calendar with his photos for every month of the year,’ he said.

‘It was the happiest day when he was brought back to their homes.

‘He would’ve been the absolute perfect candidate [for hunters], he was such a gentle giant he’d just stand there and look at you. I can’t imagine it.’

The company tasked with the shootings was Procull Solutions, which had a series of disturbing posts on their Facebook page before it was closed down after receiving backlash from residents.

One post shown to Daily Mail Australia shows a dog eating a dying deer saying they were ‘wrapt’ with the kill.

‘Interesting night blowing its guts out,’ the post reads.

Wildlife Victoria told Daily Mail Australia it heard about the situation and would like to work with Heritage Golf and Country Club to find a solution.

This article was first published by The Daily Mail on 30 April 2021. Lead Image: The beloved kangaroos of Heritage Golf and Country Club have been saved from a cull after the club received huge backlash from its members and local community.