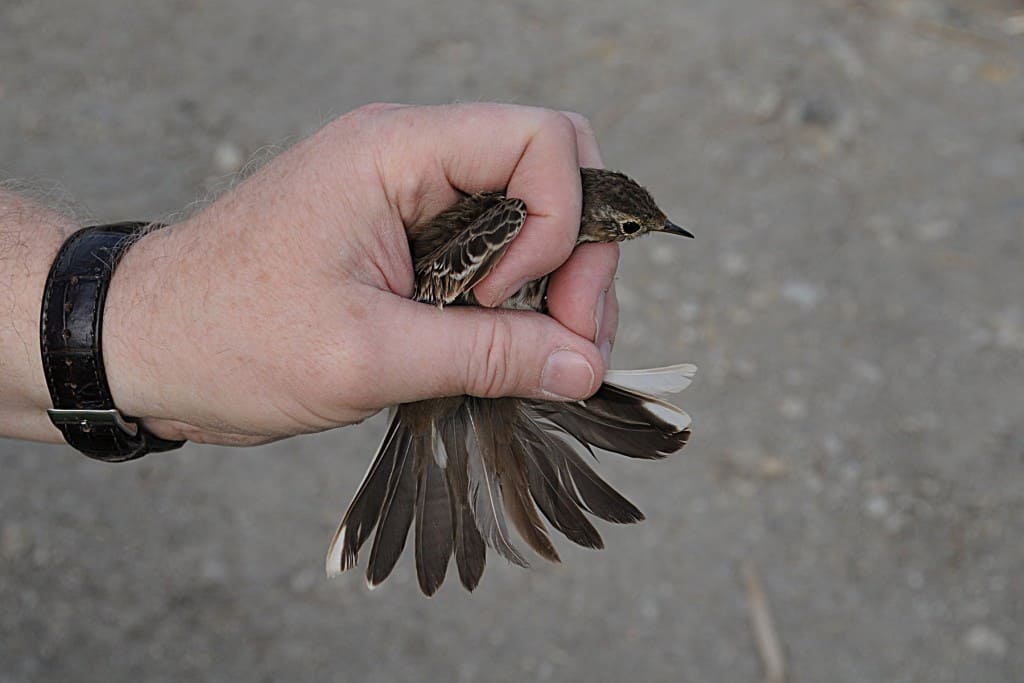 I have starting to learn (July 2011) to ring (band) birds, as a trainee, in Bahrain with the help of trainer Brendan Kavanagh . Brendan is licensed to ring under the British Trust for Ornithology scheme which operates in Britain and Ireland and has permission to use their rings in Bahrain. As a trainee ringer it will take me many months / years to move from a ‘Trainee’ under supervision to a ‘C’ ringer, which will allow me to ring on my own unsupervised. I am learning in Bahrain, as this is where Brendan lives. Learning to ring in Bahrain is a good way to allow me to see many birds I would not otherwise be able to, as well as allow me to gain knowledge of aspects of birds I would not be able to see in the field, such as moult strategy.

Alba Marsh is a small piece of marsh about half way down the east coast of Bahrain. The area has extensive Phragmites (Phragmites australis) reed-beds, but over much of the area the water is too deep to set nets. In the area where we ring, the reeds are shorter as people cut them for animal fodder and they are interspersed with low Tamarisk scrub. Whilst ringing there on Friday 20th January 2012 with Brendan we caught six pipits, all being coutellirace Water Pipits with the exception of one bird.

This bird superficially looked like a Water Pipit but had a very heavily streaked malar, breast and flanks and was much whiter on the under-parts than the coutelli Water Pipits. I took a number of photographs of the bird in the hand after processing it. On checking the measurements they did not fit for Meadow Pipit or Tree Pipit and the bird did not look like a Tree Pipit either and did not show the highly curved rear toe of this species. Thoughts then turned to Buff-bellied Pipit (Anthus rubescens) and I checked my photographs of the bird with some on the internet and they looked very similar. I posted a question on Surfbirds, an internet bird forum, to see what other people with more experience of pipits than me thought. The first reply from Marc Giroud was that he thought it was a Buff-bellied Pipit of the sub-species A. r. japonicas and Yoav Perlman who has seen the japonicas sub-species in the hand as well as the field in Israel, also confirmed its identification as a Siberian Buff-bellied Pipit. I would like to thank Marc & Yoav for sharing their knowledge and thoughts on this bird. The Siberian Pipit (Anthus (rubescens) japonicas) is sometimes treated as a separate species from American Buff-bellied Pipit (Anthus rubescens rubescens), as it breeds in eastern Asia and is significantly different in terms of plumage characteristics from the latter which breed entirely within North America and western Greenland.

The Siberian Buff-bellied Pipit (A. r. japonicas), breeds in central & western Siberia from Tunguska to Kamchatka and south to northern Sakhalin & the Kurile Islands. They winter in eastern & southern China, Honk Kong, Taiwan, South Korea, Japan, Nepal, Pakistan, northern India, northern Myanmar & northern Vietnam with birds being recorded regularly in Israel. Vagrant birds have been seen in Italy and regularly in the Middle East (mainly Israel) during migration and winter. The species status in the Middle East is listed here:-

Bahrain: Not recorded (1st record if accepted on 20th January 2012)

Siberian Pipit differs from American Pipit by having darker olive brown upper-parts and whiter under-parts. The sides of the chest may occasionally be washed buff, but typically the throat, center of breast and belly are white, creating a very white look to the under-parts. Siberian Pipit is heavily streaked below with long, thick streaks which are brown in colour although look black from a distance and the streaks contrast strongly with the white under-parts and are considerably darker than the upper-parts. These streaks extend down the flanks in a pattern similar to Meadow Pipit (Anthus pratensis) and sometimes give a stripped appearance. The median coverts are nearly always white-tipped (buff-tipped in American Pipit) and stand out as white upper wing-bars. The greater coverts vary between whitish and buffy and are not so diagnostic. The eye-ring of Siberian Pipit stands out well, due to the darker upper-parts. The malar stripe of Siberian Pipit tends to be thick and dark, contrasting with the white under-parts and greyish upper-parts and bulges at the posterior end, which is solidly coloured, often flaring onto the side of the neck. The leg colour of Siberian Pipit is pink to pale brown and never black, whereas American Pipit generally has dark grey to black legs although they can occasionally show pale brown legs (Chin-Ty Lee – Siberian versus American Pipit in Alternate Plumage).

A few features that help identify the species are the large white eye-ring, bold supercillium, bold breast streaking, strong wing-bars and plain mantle. All of these features can be seen on the photographs of the bird caught in Bahrain and shown above. Separation of Siberian Pipit from American Pipit should be possible using a combination of field marks such as wing-bar colour, overall colour, amount of streaking, thickness of the malar stripe, boldness of the eye-ring and leg colour.

This is the first record of Siberian Buff-bellied Pipit for Bahrain and would not have been seen except for the fact it was caught. The area where is was trapped is not an area where you can get views of the birds as they sit on the ground out of sight in the Tamerisk and reeds and only fly when disturbed. Some birds use the site to roost and others winter there, so it is difficult to know which of the two options the bird was using. If we re-trap the bird later we will know. This record has still to be formally accepted by the Bahrain Rare Birds Committee, although Brendan discussion the bird with Howard King the Bahrain recorder and Howard mentioned he thought the bird looked good.