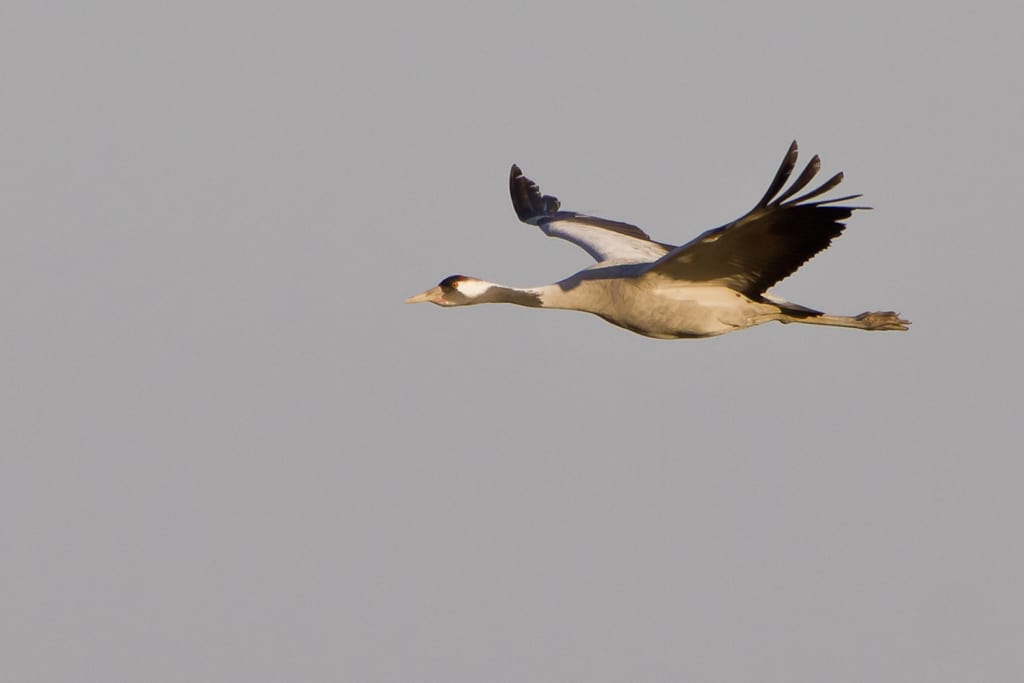 Perhaps the most important winter refuge for Hooded and White-naped Cranes in the world is the famous Arasaki area in Izumi city, Kagoshima, Japan. From late November each year, thousands of these magnificent birds migrate to this spot on the southwestern coast of Kyushu, and by the end of December most of the more than 10,000 cranes have arrived.

Then around mid-March, the birds begin returning to their breeding grounds in Russia. While the majority are Hooded Crane, there are also a few thousand White-naped Crane along with a few stragglers such as Sandhill Crane and Common Crane. In some years a Siberian or Demoiselle may also make an appearance, although neither has been recorded recently.

Hybrid Hooded x Common are also present in small numbers. The conservation status of both the Hooded and White-naped on the IUCN Red List is “vulnerable”.

In years gone by, the protected area for the cranes was limited to a single section of rice paddies in front of the “crane park” observatory, and the cranes were fed daily by the local warden and volunteers. However, this setup raised many concerns with environmentalists, as such a large concentration of endangered cranes wintering in one location carried with it the risk of a catastrophe if some lethal disease were to infect the flock. This risk was made even more serious by the loss of another important crane wintering area in Japan in Yamaguchi prefecture.

To lessen this risk somewhat, a section of the eastern rice fields of Arasaki, which was popular with the cranes anyway, was also turned into a protected area during the winter months a few years ago. This was supposed to result in the flock being split in two, however in reality there is still a lot of back-and-forth between the two protected areas among the cranes.

Last winter the risk of a serious disease spreading among the cranes was realised; the Avian Influenza (Bird Flu) struck Japan heavily and the cranes of Arasaki were not spared. Although many thought this would result in a heavy percentage of birds dying, in fact the numbers dead were not so significant, and nowhere near enough to threaten the survival of the two main wintering species. Indeed, the cranes proved very resilient, and the number of cranes was only impacted by a few dozen rather than the hundreds or thousands that had been feared. This winter, as of January 14, 2012, there were a total of 13,101 cranes (9,891 Hooded; 3,198 White-naped; 3 Sandhill; 6 Common; 3 Hooded x Common) at Arasaki, which is very close to the maximum ever recorded (13,521 in 2000) and a few thousand more than previous years. It goes to show that birds are a lot more hardy than we give them credit for. Actually, a case study into why the number of casualties due to the bird flu was not greater would be a worthwhile endeavour. Was it because the crane flock was split in two? Was it because the sick birds were somehow quarantined naturally? Was it because the majority of the birds already had a degree of immunity to the virus? Or perhaps the particular strain of virus was not as infectious as thought? It would be interesting to find out…

Arriving at Arasaki in winter is always a mesmerising moment, and the sight of the cranes departing or returning to their roost at dawn or dusk is perhaps one of the most incredible displays of nature one could hope to witness in his or her lifetime. But Arasaki is not just for the cranes; the surrounding area provides shelter for all sorts of rare winter visitors – from tiny warblers and buntings to large waterfowl and raptors, along with many endemic residents. This variety makes Arasaki one of the best birding areas in Asia in the winter, and therefore attracts birders from across the globe. This year I will be visiting Arasaki in late February or early March again – I have found that this is the best time to ensure all wintering birds have arrived and become accustomed to their temporary surroundings, making them easier to photograph. The cranes also start to display more as the time for returning to their breeding grounds draws near. I will be sure to post a report here after the trip!

For more on wildlife in Japan, check out