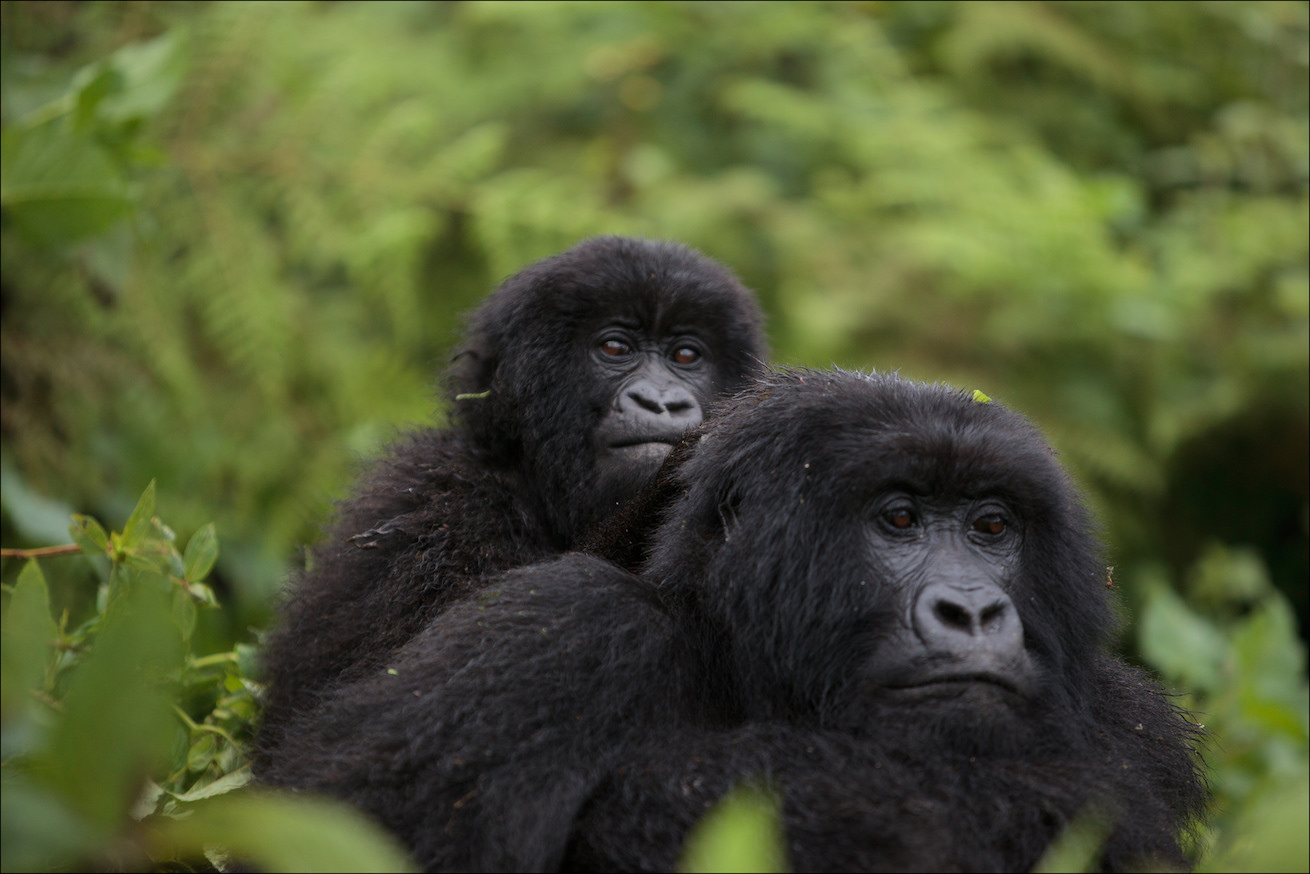 On Jan. 11 this year, something happened that primatologists had both feared and expected: two western lowland gorillas at San Diego Zoo Safari Park tested positive for SARS-CoV-2.

Right from the start of the COVID-19 pandemic, experts had assumed great apes would be susceptible to the virus. IUCN great ape specialists sent out a document in March 2020 to advise on the risk, and most great ape tourism sites closed immediately.

“COVID affected every single aspect of what we do,” says Karen Kemp, communications director of U.S.-based Friends of Bonobos, which manages fundraising and marketing for the world’s only bonobo sanctuary, Lola ya Bonobo in Kinshasa, the Democratic Republic of Congo (DRC).

Last year, a planned release of bonobos (Pan paniscus) into the wild was delayed due to pandemic-related travel restrictions. Talks of starting a bonobo trekking industry stalled. Outreach programs were put on hold, though the organization and its local partners have since been able to resume conservation education, recently reaching 1,000 children through a series of school visits. The small amount of income from visiting researchers also fell away, and with it, of course, a lack of new bonobo research over the past year. And as its income dropped substantially, the sanctuary received more bonobo babies than in the last five years combined — possibly due to an increase in bushmeat hunting due to pandemic hardship, or possibly as a success of its outreach work.

Overall, great ape researchers were well-prepared for the pandemic in terms of health and safety. They already knew the risks of great apes catching human diseases, so masks and distancing have long been a standard when researching wild primates.

In February 2020, Gorilla Doctors, a veterinary nonprofit dedicated to the health and conservation of mountain (Gorilla beringei beringei) and eastern lowland, or Grauer’s (G. b. graueri) gorillas in Uganda, Rwanda and the DRC, implemented daily temperature checks for staff, a limit of a single person per vehicle, and hand and boot sanitizing on park entry. Mask-wearing was made mandatory at all times in the parks.

In Uganda and Rwanda, one small silver lining of the pandemic may be the adoption of mask-wearing, where, unlike at most other great ape sites, it was not previously required for tourists. Since tourism resumed, masks have been mandatory for visitors in both countries.

Increasing the distance between people and gorillas to 10 meters (33 feet), up from the previous 7 m (23 ft), did “provide some challenges for our veterinarians who rely on visual health assessments to monitor for signs of illness or injury,” says Kirsten Gilardi, Gorilla Doctors’ executive director and chief veterinary officer. “They had to rely more on their cameras and zoom lenses to review wounds, which was always tricky in dense vegetation.”

If that does happen, it may be difficult to contain an outbreak in the wild, especially in gorillas that live in close groups. It’s also “really hard to stop one gorilla transferring from one group to another,” says Gladys Kalema-Zikusoka, veterinarian and founder of Ugandan nonprofit Conservation Through Public Health (CTPH).

The Lola ya Bonobo team is used to protecting its wards against respiratory diseases, with annual flu outbreaks occasionally leading to sanctuary closures. The rescued babies require close care and rely on their surrogate (human) mothers. So when the pandemic broke out, the sanctuary brought around 20 staff members permanently on site for five months.

“The idea of potentially wiping out the entire population of the sanctuary was just not one we wanted to think about,” Kemp says. Since the sanctuary reopened in August last year, guests must wear a mask and visor, and groups are capped at 10.

In parks such as Volcanoes National Park in Rwanda and Bwindi Impenetrable Forest in Uganda, the mountain gorilla trekking industry has been extremely successful. As well as bringing income to rural areas, the safeguarding of their habitat has also enabled the mountain gorilla population to grow; in 2018, the subspecies’ conservation status improved from critically endangered to endangered.

When tourism stopped, the effects were felt almost immediately.

“The first five months were disastrous,” says Johannes Refisch, coordinator of the United Nations Environment Programme’s (UNEP) Great Apes Survival Partnership. In Rwanda, where permits cost $1,500 per international tourist, Refisch says there was a loss of $120,000 a day from those fees alone. And that’s not considering transfers, accommodation, guiding and porter services, tipping, or the souvenirs tourists might buy.

For a great many people, that loss of income translated very quickly into hunger, which in turn led to more subsistence poaching. In 2020, a gorilla was killed for the first time in nearly 10 years in Uganda, after poachers accidentally crossed paths with a silverback in Bwindi. There isn’t enough data to accurately gauge how much subsistence poaching has increased across the continent, but experts agree that it likely has increased around great ape protected sites, sometimes enabled by reduced law enforcement at sites with less funding.

Uganda is still only seeing 10% of its usual tourism revenue, says Kalema-Zikusoka. Its wildlife authority, usually fully sustained by tourism income, has had to turn to NGOs to fund activities such as security patrols in the parks. To ensure that people can at least eat and won’t fall back on subsistence poaching, CTPH started a Ready to Grow program that has already delivered fast-growing seedlings to 1,000 households around national parks.

Sanctuaries that rely on tourism have been heavily affected, too. In Kenya, Sweetwaters Chimpanzee Sanctuary, part of Ol Pejeta Conservancy, closed to visitors and researchers for a year to avoid infection. The closure and the lack of tourists “led to severe loss of revenue, up to 85%,” says head of conservation Samuel Mutisya. As a result, salaries were cut and some non-essential operating costs were suspended.

The key to safely resuming tourism is vaccines. CTPH is encouraging the wildlife authority in Uganda to adopt mandatory vaccines for tourists, once a greater proportion of the world has been vaccinated.

Martha Robbins, head of the gorilla research group at the Max Planck Institute, agrees with a vaccine requirement. “To enter a lot of African countries you need to show a yellow fever vaccination,” she says. “So, in my opinion, it’s not outrageous to say you need to show a COVID vaccination in order to see wild great apes, especially given the risk of disease transmission.”

Rwanda has prioritized tourism workers and conservationists in its vaccine rollout, so crucial are the gorillas to its economy. Kalema-Zikusoka has been promoting the same approach in Uganda, and in June several tourism and conservation groups, including the Uganda Wildlife Authority, launched a vaccination drive in Kampala. But in rural areas, they’ve been battling vaccine hesitancy coupled with practical issues, such as people living far from health centers. One solution being discussed is mobile clinics that can come to the villages.

Not all countries have enough access to vaccines to take such measures, however; Africa as a continent has administered just 1.68% of the world’s vaccine doses. “Redressing this global imbalance is an essential part of the solution,” says Magdalena Bermejo, who has been studying western lowland gorillas (Gorilla gorilla gorilla) around Odzala-Kokoua National Park in the Republic of Congo since 1994.

As tourism revenue dropped off, most sites have found their expenses increasing due to the costs of quarantining and testing, extra PPE, and keeping staff permanently on site. Emergency grants and private donations have helped, but governments that might have previously funded conservation efforts are directing resources toward managing the pandemic in their own countries. “There’s not that much money for Africa,” Refisch says.

In many cases, sites that don’t have as much tourism have fared better during the pandemic due to their lower reliance on the industry. Robbins oversees a western gorilla research and tourism project in Loango National Park in Gabon (currently closed to visitors). The park started gorilla tourism in 2016, and though it was small in scale (with 360 tourists in 2019), pre-pandemic it was growing with visitor numbers set to double in 2020. As that builds back up, the park will continue to rely on grants to pay salaries and run habituation projects.

In the Republic of Congo, Bermejo says, they “may need to stop relying so heavily on tourism and invest in other social projects more related to communities’ needs.” Odzala remains closed to tourists; the abundance of caution is no doubt a lesson from the Ebola outbreaks of 2002 to 2005 that killed dozens of people in the region and around 5,000 western lowland gorillas, including Bermejo’s research individuals.

Conversations about non-tourism conservation businesses have been injected with a sense of urgency. CTPH had an existing business, Gorilla Conservation Coffee, that was able to operate through the pandemic as cargo flights continued, although it suffered due to fewer tourists buying the coffee in Uganda. Kalema-Zikusoka says they need to get other locally made products to international markets as well to ensure a steady stream of income that doesn’t rely on people traveling — because it’s not just another pandemic that could affect tourism, but political instability, natural disasters or a global financial crash.

The silver bullet of a conservation business or sustainable revenue stream that can match the revenue and land protection reach of tourism without relying on international travelers remains elusive. Ideas include a wildlife version of carbon credits, where people are paid for the protection of a species in the protected area they live around (one such project is being rolled out in Namibia, but is still linked to tourism) or conservation taxes on big businesses, in addition to smaller for-profit conservation businesses such as honey or shade-grown coffee farming to protect forests and promote ecosystem health.

One of the biggest takeaways from the past 12 months is that we can no longer afford to ignore the link between environmental health and our own well-being. For Kalema-Zikusoka, it’s something of a vindication, having worked on this for nearly 20 years.

Organizations such as Gorilla Doctors, SPAC Field Station Network, UNEP and CTPH are dedicated to the One Health concept, which addresses “human health, animal health and environmental health together,” Kalema-Zikusoka says.

Now, she says, people finally understand what CTPH is about. “As much as we are struggling with COVID,” she says, “I’m really pleased that our work … has become much more significant.”

For instance, CTPH is one of two conservation organizations on the Ugandan COVID-19 task force. The vaccine rollout in rural Uganda to safeguard people and gorillas, and to restart tourism, is an example of the intersection of human health and ecosystem conservation.

“I was not surprised this [pandemic] happened,” Robbins says. “It’s put a big emphasis on a lot of the issues that have already been out there in conservation. But I guess my concern is that we’re all tired. Will it just be business as usual in six months or a year’s time — versus really trying to think creatively and out of the box? One can be hopeful, I’ll just say that.”

This article by Sheryl Lee Tian Tong was first published on Mongabay.com on 11 June 2021. Lead Image: Mountain gorilla with baby, photographed in Rwanda. Gorilla tourism has developed into an economic mainstay for the country, but the COVID-19 pandemic has exposed the fragility of conservation strategies that rely on tourism for funding. Image by Ludovic Hirlimann via Flickr (CC BY 2.0).