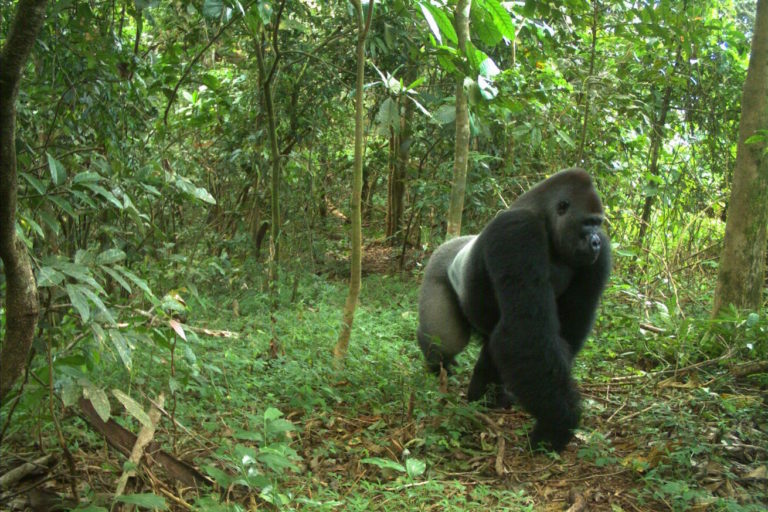 For the past eight years, Mgbang, 42, has toiled to stop these threats from taking over the 100-square-kilometer (39-square-mile) sanctuary in southeast Nigeria’s Cross River state, situated along the country’s border with Cameroon.

His regular arrests — up to four per month — don’t appear to have reduced the frequency of incursions into the sanctuary. And neither have frequent confiscations of machetes, guns and chainsaws.

“I just can’t keep seeing all this,” he says, adding that he is worried the sanctuary is slowly losing its core purpose: to serve as a refuge for the Cross River gorilla (Gorilla gorilla diehli) and other wildlife.

Africa’s most endangered ape, the Cross River gorilla lives in the mountainous portions of the Cameroon-Nigeria border.

Fewer than 300 individuals are believed to remain in the wild. About 100 of them are found in a patchwork of three adjoining protected areas: AMWS, the community-owned Mbe Mountains, and the Okwangwo division of Cross River National Park.

Although federal and state laws protect the gorillas, their habitat faces mounting pressure from an ever-growing human population.

The area that is today AMWS was carved out of the northwestern portion of the 383-km² (148-mi2) Afi Forest River Reserve, an area that received no significant protection and was under pressure from farming, logging and hunting.

Hunters generally targeted porcupines, duikers, red river hogs and rock hyraxes, but also occasionally hunted the Nigeria-Cameroon chimpanzee (Pan troglodytes ellioti) and the drill (Mandrillus leucophaeus). This heightened fears about the safety and survival of the gorillas, especially after one was killed in 1998.

In the late 1990s, surveys led by Kelley L. McFarland, then a doctoral student at City University of New York, found that at least 40 gorillas inhabited Afi Mountain. The findings prompted conservation groups to focus increasing attention on the area. NGOs including the Wildlife Conservation Society (WCS), Pandrillus Foundation, Fauna & Flora International and the Nigerian Conservation Foundation pressured the Cross River State Forestry Commission (CRSFC) — then the Department of Forest Development — to set up a wildlife sanctuary in Afi Mountain to safeguard the gorillas and their habitat.

After years of discussion and planning, in May 2000 the CRSFC officially established AMWS and gazetted Afi Mountain’s new status. As an official wildlife sanctuary, unauthorized entry for farming, logging or hunting was outlawed, and patrols were established to enforce these restrictions.

It was a defining moment in the fight to save the Cross River gorilla, which had around that time just been listed as critically endangered by the IUCN.

For conservationists, the sanctuary presented a refuge for gorillas and their habitat, and a fillip to gorilla-focused monitoring and research work. For communities, talk of gorilla-based tourism and its potential to increase rural income sounded exciting. NGOs turned to raising conservation awareness, providing support to the forestry commission, and expanding access to livelihood alternatives.

But as years passed, funding dried up, and some NGOs pulled out. Rather than filling the gap, state authorities also reduced support for the forestry commission.

Meanwhile, the human population in the 16 communities that surround Afi continued to surge. About 27,000 people currently live in these communities, according to WCS estimates.

A 2017 study published in the Nigerian Journal of Agriculture, Food and Environment reported that the CRSFC was “grossly understaffed” and concluded that this affected the agency’s capacity to manage forests under its care. The researchers found that the commission had just 324 employees, only 28 of whom were devoted to wildlife conservation.

“The rangers protecting Afi are few and there are so many entrances into the sanctuary,” says Chris Oned who works for the state’s tourism bureau in the area. He compares the situation to attempting to police the entire population of Lagos with just a handful of people.

Today, AMWS, a blend of low-lying and submontane forests, is deteriorating slowly.

The sanctuary is not just home to gorillas, but also other endangered species such as the Nigeria-Cameroon chimpanzee and the drill, as well as the vulnerable grey-necked rockfowl (Picathartes oreas).

But these animals are increasingly competing for space with humans. WCS estimates that there are at least 1,000 cocoa and banana farms growing within the sanctuary. And there is the problem of dry-season bushfires, which often spread from surrounding farms into the sanctuary, ravaging the gorillas’ habitat.

Although the gorillas might not be directly targeted by hunters — the great apes mostly inhabit the rugged mountains that are not easily accessible — the wide use of wire snares to capture smaller mammals like rock hyrax and porcupine poses a significant danger to their survival.

In 2010, an infant gorilla was trapped by a wire snare and died soon after. In 2012, two gorilla carcasses were found at a hunter’s camp, reportedly killed after one of the gorillas was trapped in a wire snare set for smaller prey.

The rangers also reportedly spotted 112 empty shotgun shells, expanding farms, and 14 logging sites inside the sanctuary, and recorded at least 13 gunshots during patrols.

Habitat loss, mostly driven by farming and logging, also imperils the wildlife corridor linking Afi’s gorillas to groups in Mbe Mountains and Cross River National Park. A genetic analysis published in 2007 found signs of migration between Afi gorillas and other subpopulations within the gorillas’ range; losing these corridors would be a blow to the genetic diversity of the species.

He says his team of about 20 community rangers have reduced hunting but they need more help.

The problem is that after reporting these issues to the forestry commission and local communities, no sanctions are meted out to offenders, he says.

State law criminalizes the use of wire snares, as well setting forest fires, hunting or killing of wildlife, logging, or engaging in agriculture inside the sanctuary. Penalties for convicted offenders include fines of at least 100,000 naira ($258) and/or six months to two years in prison. But offenders are rarely prosecuted, much less convicted and fined.

But solving the problem of poaching isn’t necessarily just a matter of ramping up enforcement.

Kyrien Didang, chair of the community-based Afi Forest Management, blames poverty for driving most of the human-induced pressure on the sanctuary.

“The biggest challenge we have is the hunters and poverty usually contributes to that,” Didang says. “The government makes a lot of promises but never fulfills them. The people are fed up too.”

Patrick Njar, the CRSFC’s director for forestry and ecotourism, attributes the commission’s indecisiveness in tackling these problems to lack of support from the state government.

“The forestry commission can really do nothing for now because there is no funding from any sector,” Njar says, adding the commission has no cars or motorcycles to allow its staff to move around and improve patrols in and around the sanctuary.

“The working conditions [are] pitiful,” he says.

As Afi grapples with a growing crisis, WCS has stepped in to support the community rangers, including Mgbang. It provides training, field rations, camping allowances, patrol equipment and monthly stipends.

In all three sites where the gorillas occur, the NGO conducts conservation education initiatives in schools and local communities. It does so through community meetings, films screenings on great apes, field trips to the forest, conservation clubs, and campaign T-shirts and notebooks.

“If the CRSFC begin to do a better job of protecting the sanctuary even the communities themselves will realize that this is a protected area and certain activities are not permitted,” says Inaoyom Imong, WCS Nigeria’s program director for the Cross River landscape.

“The state government needs to take better ownership and responsibility for the management of the wildlife sanctuary,” he says.

However, Ita, the government spokesman, says more support needs to come from international donors, especially since a statewide logging moratorium means the local government cannot derive revenue from the forest. “We are struggling; there are debts and salaries to be paid,” he says. “We are appealing for funding. We need support to be able to take of these forest resources.”

At a workshop on protecting the gorillas in Nigeria in December 2019, most participants called on Cross River state authorities to recognize the value of the AMWS, make a major commitment to increase funding to the CRSFC, and support the commission in rooting out farm encroachment, poaching, logging and other challenges.

“Without a major commitment from the government, the wildlife sanctuary may very well be doomed,” says Imong, a member of the IUCN Primate Specialist Group.

“WCS and other stakeholders can provide support to the government but there needs to be a strong [government] presence on the ground at Afi for the sanctuary to be effectively protected.”

“If the state government has made an example of just one [trespasser],” he says, emphasizing “just one” repeatedly, “all these issues affecting Afi would have reduced by now.”

A father of six, Mgbang says working in the sanctuary is a labor of love. His own father, a hunter, was accidentally killed by another hunter inside the forest 33 years ago, Mgbang says.

“His death still annoys me so I [vowed] to stop all illegal activities inside the sanctuary,” he says.

The last time he stumbled on a group of four gorillas in January, his desire to protect them grew stronger. He wants his 15-year-old son to also come across gorillas in the future.

Mgbang says he often takes his son with him on patrol. “I want him to grow to protect the forest, to defend the gorillas with all his strength.”

This article by Linus Unah was first published on Mongabay.com on 13 July 2020. Lead Image: A cross river gorilla, one of only about 300 believed to survive in the wild. Image courtesy of the WCS.