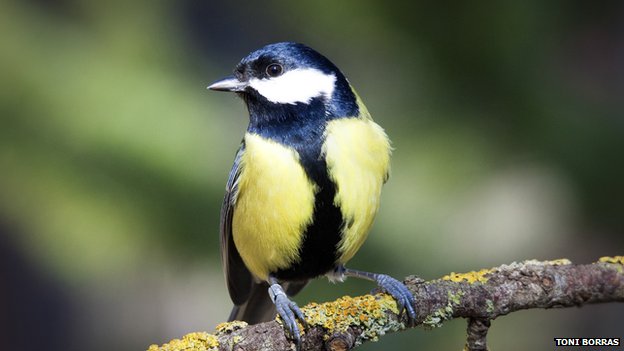 Urban great tits have smaller black breast stripes than their rural neighbours, a study has found. Scientists discovered significant differences between birds living in Barcelona, Spain and a nearby forest. Smaller “black ties” appeared to improve male great tits’ survival rates in the city, while in the countryside birds with larger ties fared best.

His team captured and recaptured birds over several years and used a predictive computer model to compare survival rates of great tits with different sized ties.

“Recapturing a bird means that it is alive, and so we can relate survival probability to tie size,” explained Dr Senar, who is head of research at the Natural History Museum of Barcelona.

The size of the distinctive black stripe on great tits’ yellow chests is hereditary. It varies more in males, and is linked to their personality.

In natural habitats, wide-tied birds are more successful; they father more offspring and are favoured by females choosing mates.

But in the city it is possible that caution may be key to survival, the study suggests.

Details of the findings are published in the journal Ecology and Evolution.

“The urban habitat is probably less predictable in any respect, and cautious birds can perhaps be favoured,” suggests Dr Senar.

“But it is difficult to say why,” he admitted.

“Perhaps the relationship is more indirect. What normally happens is that a cautious personality is linked to a slow but very detailed exploration ability and innovation.”

The team hopes the study will help the understanding of how birds adapt to urban habitats.

Building on this knowledge, the new study shows how the difference in plumage between birds living in urban and rural habitats is an example of “divergent” natural selection – when individuals of the same species become increasingly dissimilar over time.

Dr Senar said: “I like to advocate the urban habitat as a nice experiment in the ‘wild’ where we can see natural selection in action.”

Past research has shown some birds have adapted to city life by their larger brains relative to their body size, which may help them deal with the changeable conditions of urban environments.

And urban great tits’ song has adapted to project further.

The researchers wrote that the question now is, “whether urban great tit females have realised that in the urban habitat, the ‘high quality’ males are those with small ties.”

Dr Senar added: “I wonder whether urban females have realised that in the city, less is more.”

This article was written by Michelle Warwicker for BBC Nature News.