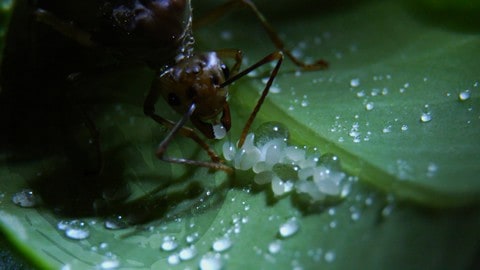 Strong winds and rain in North Queensland caused the early nesting of some fertilised winged Green Ants called a queen to be damaged or destroyed. Some have died in result of trying to re-established their nesting grounds, by attempting to lay another clutch of eggs (one third in size of the initial egg quantity), dying thereafter possibly from stress or low energy reserves The above image of a survivor Queen, shows her with the original clutch of eggs, actively cleaning her brood from rainwater and relocating them within the leaf.