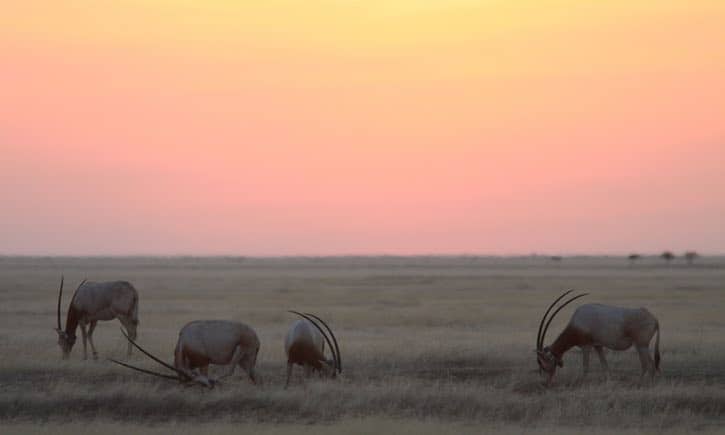 A group of scimitar-horned oryx, an antelope declared extinct in the wild, have been reintroduced to their original home on the edge of the Sahara desert.

Fourteen captive-bred animals were released in a remote area of Chad and joined a first group reintroduced in August 2016, conservationists from the Zoological Society of London (ZSL) said.

Scimitar-horned oryx were once widespread across the southern Sahara, but were driven to extinction during extended civil unrest in the region in the 1980s and 1990s and officially declared extinct in the wild in 2000.

A breeding programme in captivity, established in the United Arab Emirates and involving zoos around the world including ZSL’s Whipsnade Zoo in Bedfordshire, has kept the species alive.

Efforts by the government of Chad and Abu Dhabi’s environment agency, backed by organisations including ZSL, to restore the oryx to its former habitat in a vast nature reserve has seen the first group of 21 animals thrive.

The project has already celebrated the first birth of a scimitar-horned oryx in the wild for more than 20 years, conservationists said.

The 14 newly released animals – six males and eight females–- have been fitted with GPS collars to track their movements around the reserve, which is approximately the size of Scotland.

So far, they have been grazing close to the release site and are expected to move further into the reserve in the coming weeks.

ZSL conservationist Tim Wacher, who has worked on scimitar-horned oryx projects since 1985, said the reintroduction was the result of decades of work between the Chad government, international organisations and communities in the Sahara.

“It’s been a privilege to play a part in returning this iconic species to its original homeland,” he said. “Releasing these animals back into their native arid grassland landscape after two decades of absence was an emotional moment for all involved.

“The birth of the first calf has also been hugely encouraging, as mother and baby both appear to be doing well.

“We have high hopes that one day in the not-too-distant future, herds of scimitar-horned oryx will once again be a common sight across their huge protected reserve and hopefully beyond.”

As part of efforts to conserve the species, two female oryx from Whipsnade Zoo were transferred to Abu Dhabi in 2014, to contribute to a “world herd” whose descendants will be part of the reintroduction programme.

This article was first published by The Guardian on 14 Feb 2017.

I HOPE THEY WILL BE SAFE, NOT LIKE THE ORIGINAL ONES

very good to hear but they need to be safe

This is very uplifting. Is Chad enforcing laws against poaching? I surely pray they do

…And you are going to protect them from poachers HOW? Not just in the reserve but over long term pressure that shows no sign of slacking.

Absolutely wonderful! Hope they will be safe!