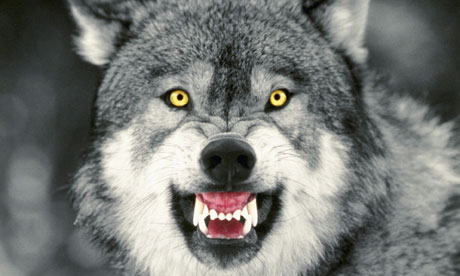 They encroach on natural habitats, kill wildlife and destroy native landscapes. While this is, in many ways, the modus operendi of human populations, it is the excuse now being given by the US Fish and Wildlife Services (FWS) in its call on the federal government to remove the gray wolf from endangered species lists. All for the purpose of using human “ingenuity” (read: guns) to help reduce the population to a more “manageable” level.

Activists are beginning to take to the social media networks in calling for the government to not slaughter wolves. One petition, began last week, has already garnered several thousand signatures en route to its 10,000 goal.

With thousands of wolves across the country struggling to survive after decades of reintroduction since humans slaughtered nearly the entire population, it seems odd that calls have grown stronger to remove them from the Endangered Species Act (ESA). According to the FWS, in the Great Lakes region, there are roughly 4,000 wolves; in the Northern Rocky Mountains around 1,700; Washington State has nine total; the southwest about 60 wolves. In Alaska, where wolves are not protected by the ESA, there live about 10,000.

So, why have the calls for “culling” wolves increased so dramatically over the past five years, in a plan to reduce the populations which the FWS terms “control”?

The modern wolf story largely begins in 1995, in Idaho (my home state), when the state reintroduced a number of gray wolves into the state as part of the “experimental, non-essential” clause of the ESA. From there, the animals developed and grew in numbers across the state as wildlife biologists helped support the small ecosystems that were developed for the animals’ use. And in the United States Pacific northwest, the Nez Perce Native American tribe also started their own project, which enabled a pack of wolves to live and create familial ties in a large fenced area.

Not everyone was pleased that hills covered in snow and jagged mountains – the difficult terrain of Idaho’s mountains – are now home to wolves: some government officials and ordinary citizens claim the species has now overpopulated the wilderness areas and is a threat to “human activity”.

As one family friend, a hunter, told me recently, the wolves are “killing livestock, attacking people in the natural parks and without action could overrun our landscape”. Although he is right that wolves do attack livestock (and wild prey), there is little evidence that people are being attacked. Wolves rarely are aggressive toward humans unless threatened.

The problem is rather with the continued development on what had, historically, been remote areas; there, wolves are simply attempting to survive. With calls for removing wolves from the protection of the ESA, however, it could soon be open season for hunters – in what officials argue are “conservation” efforts to ensure the wolves’ survival.

I spoke with an Idaho biologist who has worked with both the FWS and the wolf reintroduction program. He argues that human populations continue to “overuse” hunting in the name of sport and this has reduced deer and elk populations, not just in Idaho, but in the Great Lakes and Alaska. The result?

Wolves have been forced to look elsewhere for food and sustenance. This results in cattle being attacked because the regular food chain has been disrupted. Hunting wolves won’t stop this problem unless all the wolves are killed.

He also pointed out that during such culls – which we have seen in Idaho and other areas – it is the adult wolves that are killed, often leaving cubs unprotected and unable to fend for themselves. “It is sad that this sort of thing continues,” he added.

Activists have called for a blanket ban on wolf-killing, but there is a need to work with the FWS and those who feel threatened by wolves. We must understand that the issue of wolves is a nuanced controversy in which those directly affected by the encroaching wolf populations must be heard. There needs to be compromise that does not threaten the whole wolf population and finds sustainable solutions in the specific environments where the reintroduction process has occurred.

At the same time, we can’t afford to reverse the good work of reintroduction programs and go back to the days when wolves were seen as a deadly menace to humans and their livestock – and had to be exterminated because of that perception.

This article was written by Joseph Mayton for the Guardian UK.