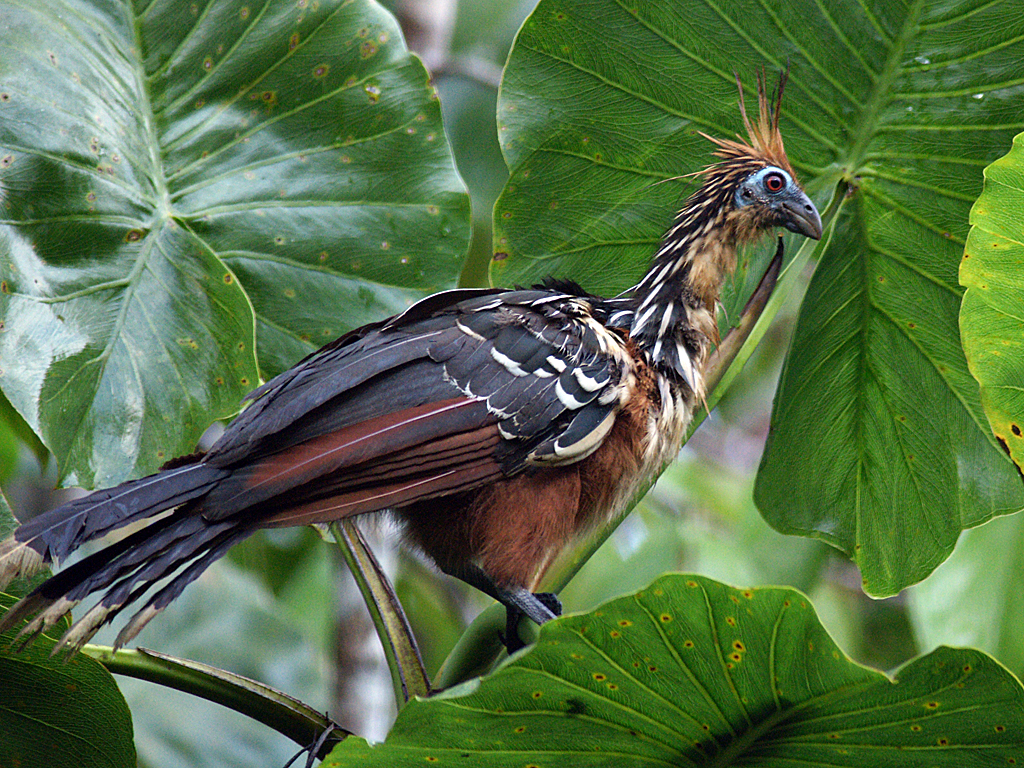 A new species of prehistoric hoatzin from the late Eocene of France is the earliest fossil record of hoatzins and the first one from Europe, according to a team of scientists from the Senckenberg Research Institute and Natural History Museum in Frankfurt, Germany.

Hoatzins (Opisthocomus hoazin), also known as Hoactzins, Stinkbirds, or Canje Pheasants, are a large species of bird found in the Amazon and other regions of South America. These birds can measure up to 70 cm in length and weigh up to 0.9 kg. They have a reddish-brown color streaked with green.

Hoatzins are noisy birds, and have a wide variety of vocalizations. They are also recognized for their odor, comparable to manure.

These birds are vegetarians and tend to forage around dawn and dusk. While foraging, they favor young leaves, buds, and shoots which are typically higher in nutrients, easier to digest, and higher in water. They are rarely observed to drink, as much of their water comes from their food.

Hoatzins are poor fliers. Their flight is usually restricted to short movements from tree to tree, but they are able to cover distances of up to 350 m in a single flight.

These birds build simple platform nests of sticks in trees that overhang the water. The females usually lay a double clutch, but sometimes there may be three eggs. Both adults care for the chicks, and help in nest construction and incubation. Young hoatzins have hooks on their wings, similar to the prehistoric Archaeopteryx.

Hoatzins were until recently thought to have originated in South America. However, fossils of ancient hoatzin-like birds from Africa and Europe now prove conclusively that hoatzins reached South America from the Old World.

A new study, reported in the January 2014 issue of the journal Auk, provides the first evidence of largely modern hoatzins in the Miocene of Africa (about 15 million years ago).

Another study, published online this month in the journal Naturwissenschaften, describes a hoatzin-like bird – Protoazin parisiensis (proto-hoatzin from Paris) – that lived in what is modern France during the late Eocene, around 34 million years ago.

“This supports the theory that hoatzins originated in the Old World,” said Dr Gerald Mayr, the lead author on both papers.

“It is a further impressive example that the South American avian fauna contains numerous relicts that were once much more widespread,” added Dr Vanesa De Pietri, a co-author of the Naturwissenschaften paper.

“Most notably, hoatzins appear to have become extinct in Europe much earlier than in Africa, where the latest fossils were dated as of Miocene age and are thus only around half as old.”

“The disappearance of these birds might be connected to a period when numerous new animal species migrated from Asia to Europe during the so-called Grande Coupure around 34 million years ago.”

This article was written for and published by Sci-News.com

Facinating natural history. Glad there are still hoatzins surviving in South America. Gives us all a glimpse of what became of the birds after archeopterix.