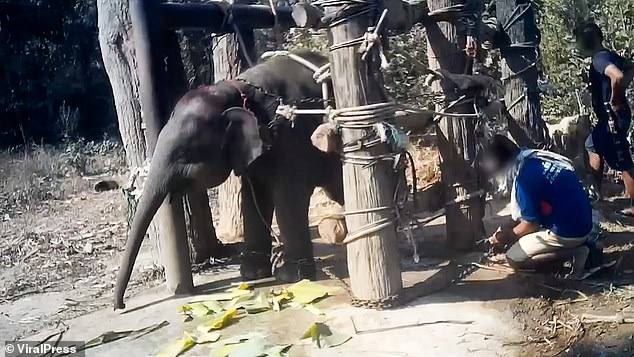 Horrific footage has exposed how baby elephants are being ‘broken’ at cruel training camps before they are set to work in the tourist industry in Thailand.

Staff recorded the calves being abused before they were taught to paint, spin hoops, carry passengers and stand on their hind legs for the entertainment of holidaymakers.

Animal rights group World Animal Protection, which compiled the dossier of footage to highlight the cruelty, said the elephants’ instincts were ‘destroyed’.

In the clip, which was passed to an animal welfare group, one mother named Gintaala and her 16-month-old baby Boonshoo were seen being trained with disturbingly barbaric methods.

The baby elephant was tied to its mother as they fed on grass before the mahouts forced them to separate as Boonshoo cried out in distress.

Boonshoo was later chained up alone in a chamber where she was taught how to follow commands.

The jumbo’s natural instincts were ‘replaced by the pain and fear of the hook’ and being chained in the posts forced it to become used to ‘loud noises and stress’.

Painful punishments can be seen being inflicted on the baby elephant with mahouts striking it with a bullhook or paddle with nails.

Another scene in the compilation of abuse shows a baby elephant’s legs collapsing as it walked under the sun.

But it quickly got back to its feet after being threatened by one of the workers and let out a loud groan as it began walking again.

The video compilation was recorded by undercover staff using hidden cameras in 2019 before it was handed to animal welfare groups earlier this year.

It has since been released by World Animal Protection, a nonprofit organisation, which campaigns to end animal abuse.

WAP Thailand’s Wildlife Campaign Manager Chat Narong Muangwong said they are working to educate tourists to stop visiting elephant shows as demand from tourism is the main driver of the abuse.

‘With such a large and ever-growing population of elephants, the welfare risks will increase accordingly. Especially when tourism is disrupted by the Covid-19 crisis.’

WAP Thailand’s Public Engagement Manager, Joe Aphiluck, added: ‘The video of the elephants were all recorded in Thailand.

‘We can’t reveal the exact locations as it would not be safe for the people involved with the investigation.

‘There is still a lot of work to do to end the abuse of elephants.

‘Tourist demand is a key driver of these atrocities, while the complexity and lack of modernity of the many Thai elephant laws make the safeguarding of elephants’ welfare more difficult.’

However, the animal rights activist said that tourists are becoming more aware of the issue and choose to see animals in their natural habitats rather than facilities with cages.

World Animal Protection said their researchers assessed almost 3,000 elephants in 2017 and found that more than three-quarters of these animals live ‘severely cruel’ conditions.

This article was first published by The Daily Mail on 22 October 2020. Lead Image: Horrific footage has exposed how baby elephants are being ‘broken’ at cruel training camps before they are set to work in the tourist industry in Thailand.