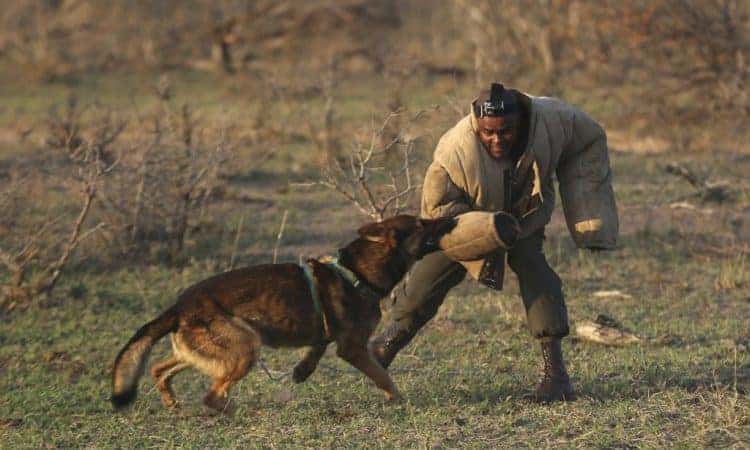 “I am ready to die for conserving the rhino,” says Wisdom Makhubele. But the brave young ranger now has another weapon in the war against rhino poaching: the extraordinary nose of tracking hounds.

The trained dogs can run poachers to ground far faster than people, sometimes even being set free in packs and followed from helicopters. The new canine training unit at the Southern African Wildlife College (SAWC), near Acornhoek, opened earlier this year and dogs have already brought armed poachers to heel in Kruger national park, the epicentre of the rhino poaching crisis.

At least 6,000 African rhinos have been slaughtered by poachers since 2008, to fuel the soaring demand for its horn in Asia, where it is highly valued as a supposed tonic and status symbol. The rhino poaching epidemic across Africa has exploded in recent years, with annual increases in killings every year since 2009: 1,338 were slaughtered in 2015.

It was a hot topic at the major wildlife trade summit in Johannesburg this week, where an attempt by Swaziland to legalise rhino horn trade was defeated.

South Africa hosts more than 90% of the 20,000 surviving white rhinos and almost half the 4,800 remaining black rhinos and saw a slight dip in the slaughter in 2015, the first decrease in nine years. Over 70% of the rhino kills occur in Kruger and a sign on the way into the park reads “Poachers will be poached”.

Dogs have been used for camp security for years, but the escalating poaching crisis has found them a new role. “They are awesome – they are instinctive to tracking,” says Johan van Straaten, manager of the dog unit, which has been funded by WWF Nedbank Green Trust. “All these dogs can track, it’s in their genes. But we train them to track the scent we want. These dogs are imprinted on human scent, like narcotics dogs are on drugs.”

Two dozen dogs are in training at the camp, protected from predators by an 8,000-volt electric fence. Most are cross-breeds of English foxhounds and blueticks, although beagles are being tested too. They are trained to detect poached horns and weapons as well as track. The rest of the pack are Belgian Malinois, a slightly smaller, more agile German shepherd, which are used for “bite work” – apprehending poachers.

Sophie, a seven-month-old hound, is first out of the kennels to start training today. It’s only her third outing, but she criss-crosses the ground and picks up the scent left by Makhubele in seconds and bounds off in pursuit. She leads van Straaten like an arrow to the hollow 500m away where Makhubele is hiding. If the dog loses the scent on older trails, the handler helps out, looking for footprints or flattened grass. “It’s teamwork,” says Makhubele.

Next out is Belgian Malinois, Dozer, this time chasing Makhubele who has donned a thick padded jacket. Makhubele runs off screaming and shouting and Dozer is given the order “bring him!”. The dog latches on to Makhubele’s arm and refuses to let go, even when swung from the ground.

The dogs are first trained to bite the arm, says Makhubele: “But later we train them to bite everywhere.” After Dozer is stood down, he pads around looking for strokes and praise. “It’s controlled aggression,” says van Straaten.

Currently, about a third of Kruger’s 22 ranger stations have a trained dog but the aim is to have four dogs per station, so all of the day’s patrols can use them. South African National Parks have trained and used their own tracker dogs for a few years and in Kenya, bloodhounds are now tracking elephant poachers. But the independent SAWC now provides the dogs for any park at 100,000 rand (£5,500) each to cover training costs.

Van Straaten says the dogs have helped him catch many poachers, most of whom come quietly once surrounded, but he has been involved in shootouts. “I like it,” he says with a careful smile. “It’s adrenaline, and being afraid makes you sharp.”

Being a ranger in the war on poaching can be deadly – more than 1,000 rangers were killed around the world in the last decade and many more injured. The danger follows the rangers home too. “They are targets and their families can be targets, that’s for certain,” says van Straaten.

Makhubele comes from a local village. “People there know me and some of them are poachers, but I am not afraid,” he says. “This [rhino population] is our legacy and we have to look after it.”

The ranger training camp reflects the violent reality. “It is very paramilitary,” says Marianne de Kock, programme manager and a former soldier. “It’s a war out there and you have to know in your heart that when they get out there, they are going to survive.”

The instructors, many of whom are also former soldiers, drill the students in weaponry, camouflage, bush survival, silent sign language to use on operations, as well as mapping and wildlife knowledge. The 128 trainee rangers currently at SAWC live in tents, with inspection drill every morning and severe physical training. Their enemy are often ex-military too, frequently coming across the border from troubled Mozambique.

“A ranger’s life in South Africa used to be all about conservation but now it is all about anti-poaching and that is sad,” said Theresa Sowry, SAWC’s chief executive. “But they are fully aware of the risks, which is why we have had to up the training.”

Self defence is a critical part of this, she says: “If you have a weapon pointed at you, you have the right to shoot. But we do not have a shoot on sight policy – we are not Botswana. In a perfect world, the poachers are arrested and put away for a long, long time.”

The dogs are a new way of capturing poachers, for whom vast criminal profits are at stake: rhino horn is more valuable by weight than gold, diamonds and cocaine.

“We didn’t use dogs before as we didn’t have the same [poaching] problem before,” says Gawie Lindeque, head guide at SAWC. “Also, in the past the bushman trackers were as good as the dogs. They would have been out minding the cattle from very young. But then we made it mandatory for all kids to go to school. The bush is not their school anymore.”

Back in the bush, as elephants, warthogs and buffalo wander past, van Straaten is still training the enthusiastic dogs. He throws the odd ball as a treat for these new and cost-effective anti-poaching weapons. “They don’t ask for a pension, medical benefits or overtime – their reward is the work,” he says.

This article was first published by The Guardian on 07 Oct 2016.