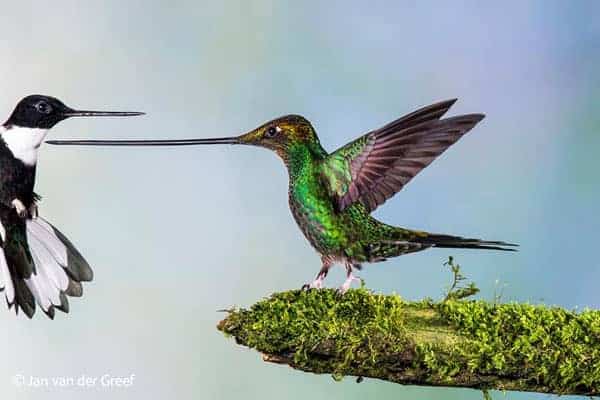 This bird averages 15 cm long and has a mass of 6 grams. It has a very long bill that is more than 3 cm long.

The upper plumage is mostly dark green with a blue-green rump, the under plumage is gray to buff-colored. It has a dark face mask with buff stripes above and below the eyes. Male and female look alike, although the female is a little smaller.

Mating rituals in the Long-billed hermit involve leks, where large groups of males defend space in which to mate with females.

“Once a female is in a territory, the male will court her with elaborate displays and songs. So in these species the males are constantly fighting to maintain the best territories,” said study first author Dr Alejandro Rico-Guevara from the University of Connecticut.

Ornithologists have known that the sexes of this species have differently-shaped beaks, but prior explanations chalked up this dissimilarity to their feeding habits.

Dr Rico-Guevara added: “the previous explanation of ecological causation suggested that males and females had different bill shapes because they fed on different flowers, perhaps to minimize competition between the sexes.”

In their study, Dr Rico-Guevara and his co-author, Marcelo Araya-Salas of New Mexico State University, found that during the transition to adulthood, male Long-billed hermits developed elongated beak tips that were sharper than those of females.

They also observed male birds using their bills to stab one another in the throat during fights, and found that males with longer, pointier bills were more likely to win these battles and therefore defend the best territories.

The scientists have also observed weaponry in other species of hummingbirds, and have plans for more studies to learn more about the evolution of these birds.

In particular, they hope people realize that despite their tininess, hummingbirds are strong and aggressive creatures.

“I think people initially think of them as beautiful, delicate creatures, but I enjoy revealing their pugnacious attitudes,” Dr Rico-Guevara said.

This article was first published by Sci-News.com on 05 Nov 2014.