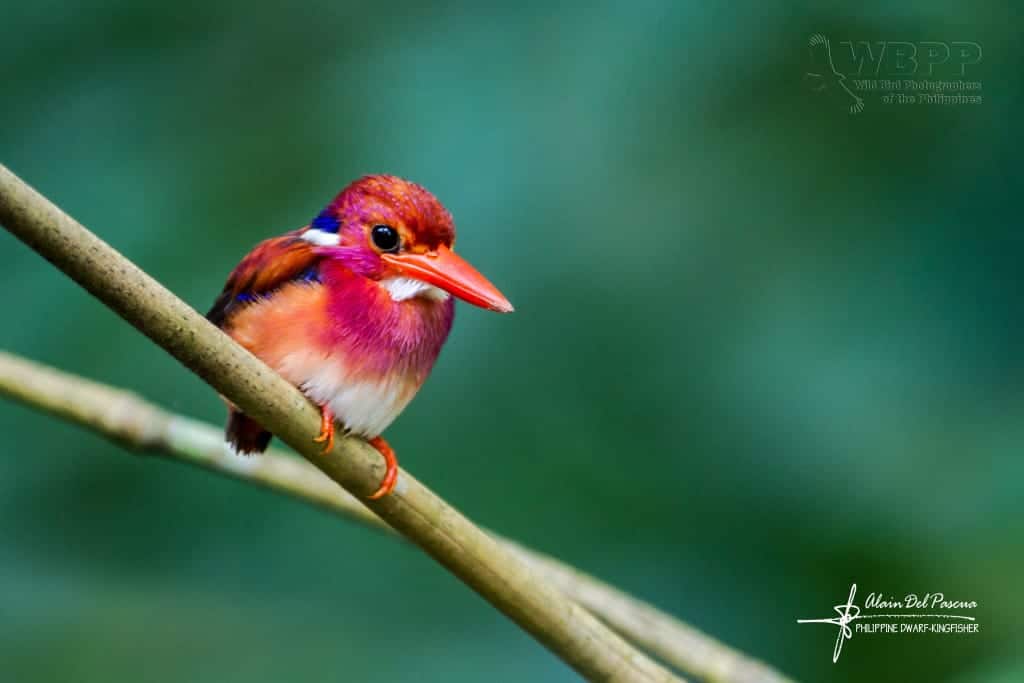 My search for the PHILIPPINE DWARF-KINGFISHER started in May 2009 in Baler, Quezon when a group of 400mm wild bird photograhers joined a photography contest sponsored by Senator Edgardo Angara and Quezon Governor Bellaflor Angara. Prof. Agerico De Villa of Wild Bird Club of the Philippines shepherded the group who went to the Diteki Watershed Forest in search of the smallest kingfisher who have been photographed in the area by Neon Rosell II and Rey Sta Ana just some few weeks before. Prof. Jerry’s words still reverberates in our minds till today when he said, “Just be patient. Wait. Sigurado yan!” But alas, we never saw a glimpse of the bird, yet that moment started off our journey as wild bird photographers. Ding Carpio was the leader of the band and the newbies include Toto Gamboa, Mark Itol, Den Alfaro and myself. Bert Madrigal, Buboy Francisco Bomika Outdoors and Rhea Bautista were there too as part of UP Mountaineers Group.

For years I have searched for the bird. It was reportedly seen in the past in Bislig Picop Forest and in Bangkong Kahoy Valley, but I never saw it. The search for the PHILIPPINE DWARF-KINGFISHER has been recently reinvigorated with the discovery of Nic Cabigas in Madella, Quirino and the posting of Bob Natural of the bird in Polillo Island, Quezon. Bert and I was supposed to go to Madella but weather did not permit us. The trip to Pollillo Island didn’t almost push thru as the weather has been unpredictable these past few days. Thanks for the visit of Jeddah-based WBPP Fellow Roy De Guzman Daantos, the trip to Polillo was made possible with Rocky Sison and JiggerJohn Delgado. It was the fourth sortie of bird photographers since Bob posted the bird’s photo, three came via land and sea travel, while one group made the trip via helicopter which awaken the sleepy town of Polillo to non-politician chopper-riders visiting their town for birds! WBPP Trustee Ramon Quisumbing literally brought bewilderement to the common folks who were amused at the thought of photographers with long lenses visiting their island to photograph a dwarf bird!

Finding the PHILIPPPINE DWARF-KINGFISHER in Polillo is quite easy as it is prfesently burrowing a nest along a streambank that serves as a boundary of barangays Bislian and Kalubakis. Bislian is where the streambank is and where the bird is burrowing, while Kalubakis is where the photographers usually position themselves, quite an interesting boundary information. While we were there, Kalubakis Barangay Chair Edwin Susa and property owner Samson Pamesa offered us young coconut juice and meat, while Bislian Barangay Chair Adel Belleses requested some help for their fiesta. Finding the bird is easy at this time, but after its nesting period we wonder if it is still an easy find. Photographing it is another matter as the vines and branches where it usually perches are quite dark and producing quality bokeh may not be possible, but we took many a picture as it showed itself few times. We were also able to get some long exposures as the bird stopped for a few seconds on its perch.

Luckily for us, the bird also perched in the open, on a bamboo branch outside of its regular place. We were surprised when we accidentally saw it motionless several meters at our back. We were chatting vociferously because we thought it was not in the area, but there it was unmindful of the noise we created. It never minded us nor felt uncomfortable, since its focus was on something on the ground that it later on picked up. My photograph at this perch was not as sharp as it should be. I think the use of 2X Teleconverter/Extender deprived me of the needed sharpness, this was also coupled by the excitement and nervousness of the moment. I may not have been in a proper setup to obtain an optimum sharpness.

The PHILIPPINE DWARF-KINGFISHER is listed as “Vulnerable” by IUCN, as this tiny forest kingfisher is undergoing a continuing rapid population decline owing to extensive lowland deforestation throughout its range.

Thanks to WBPP Fellow Bob Natural and Mamerto Tena of the Polillo Island Biodiversity Foundation for guiding us and for making all the preparations, to Manong Ramil for driving us in his high jeepney, and to Lalie Escara of Casa Escarlata for making our stay as comfortable as it could be despite the 6 to 10pm daily brownout, to Roy for providing the van and to Mark for driving it.