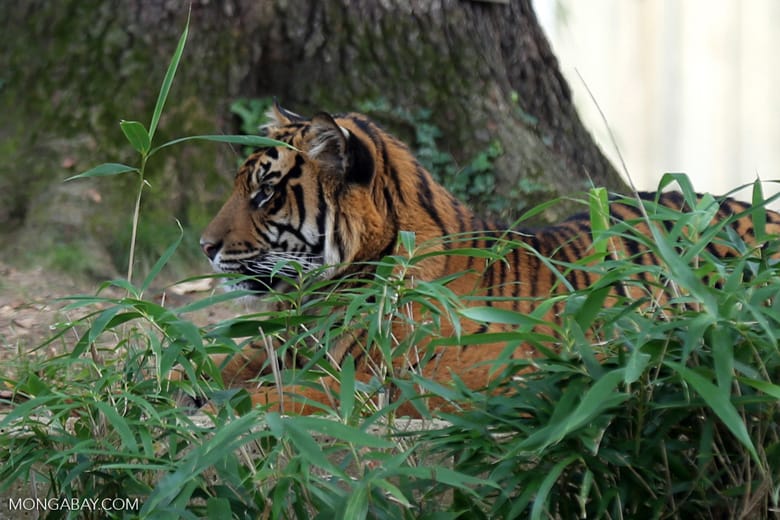 PEKANBARU, Indonesia — A wildlife conservation agency in Indonesia has deployed two special teams to capture alive a tiger blamed for killing two people this year, amid mounting calls for the animal to be killed.

The Natural Resources Conservation Agency (BKSDA) in Riau province has been on the trail of the Sumatran tiger (Panthera tigris sumatrae) since the first reported incident, on Jan. 3, when the tiger attacked three workers at an oil palm plantation in Indragiri Hilir district. The tiger killed one of the workers, identified as Jumiati, 33, after she fell from a tree that she had climbed up to escape the animal.

Although the BKSDA set out traps in the area around the palm estate run by the Malaysian company PT Tabung Haji Indo Plantations, the tiger proved to be elusive.

Just over two months later, on March 5, the same tiger reportedly killed a 34-year-old man, Yusri Efendi, who was passing through the same plantation with a group of other people when they were attacked. 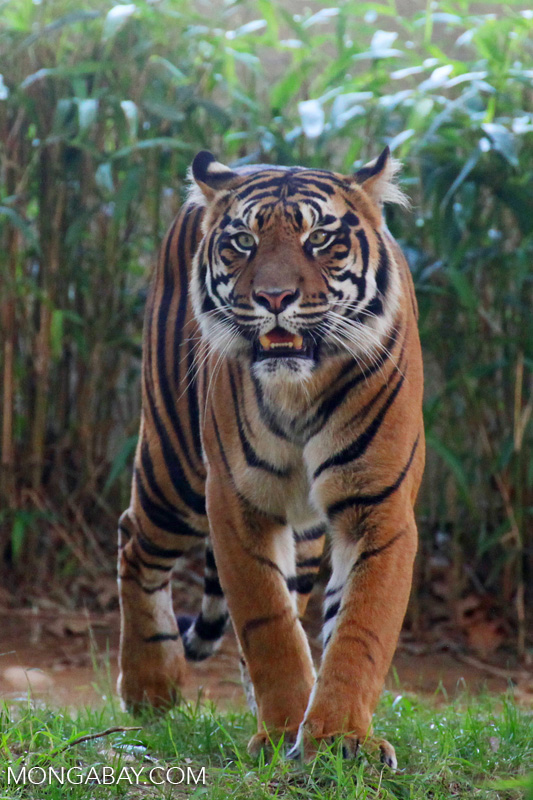 A Sumatran tiger (Panthera tigris sumatrae). The big cats have increasingly been pushed out of their forest habitats by rampant deforestation and hunting. Photo by Rhett A. Butler/Mongabay.

The two deaths prompted hundreds of residents of Pulau Muda village, where Yusri was from, to stage a protest on March 12 at the office of the plantation company. They demanded the company and the BKSDA immediately capture the tiger, which has been nicknamed Bonita.

“The people of Pulau Muda will take action to kill the beast, whatever it takes,” said Ujang, one of the protesters, reading from list of demands to the agency and the company. “And we refuse to face any criminal charges over this.”

Under Indonesia’s 1990 Conservation Act, the killing of protected species such as Sumatran tigers carries a prison sentence of up to five years and fines of up to 100 million rupiah ($7,000).

In response to the demands, the BKSDA reached an agreement with the villagers not to kill the tiger, on condition that the BKSDA capture it before March 19.

The agency has deployed two teams to capture the tiger by tranquilizing it. The teams are made up of officers from the police and military, as well as representatives from NGOs, veterinarians and companies operating in the area.

Suharyono, the head of the Riau BKSDA, said the team had orders not to shoot the tiger with live ammunition unless under attack. Even then, they would only be allowed to shoot at its hind legs, and avoid its body and head.

Suharyono said that once captured, the tiger would be transported to a wildlife rehabilitation center.

The conservation authorities in Riau are determined to take the tiger alive, in the wake of a near-identical case earlier this month in which villagers in neighboring North Sumatra province speared a tiger to death and mutilated its body. The tiger had reportedly attacked and injured two people who were part of a hunting party out to catch the animal, which they considered a supernatural incarnation.

In that incident, the villagers had earlier threatened and driven out a BKSDA team sent in to capture the tiger, insisting they were within their rights to kill the endangered big cat.

Conflicts between humans and wildlife flare up regularly across Sumatra, whose once vast swaths of forest have been cleared at alarming rates for commercial development, primarily palm oil and rubber plantations, as well as mines. There are an estimated 500 Sumatran tigers left in the wild, according to WWF. The species is listed by the IUCN as critically endangered, or just a step away from going extinct.

This article was written by Zamzami and first published by Mongabay.com on 16 Mar 2018.

Palm oil companies are intruding on these animals’ habitats. It is not surprising that the animals are trying to protect their territory. How unfortunate for the victims and their families. These palm oil companies should make restitution to the families and get the hell out of these countries!

This is quite a sad event, i am glad the conservationists have taken a step to capture the animal, in the same vain, it is a great loss to the families whose loved ones has been lost( killed by the tiger). It will only be fair for the government to compensate the families that lost thier loved ones.