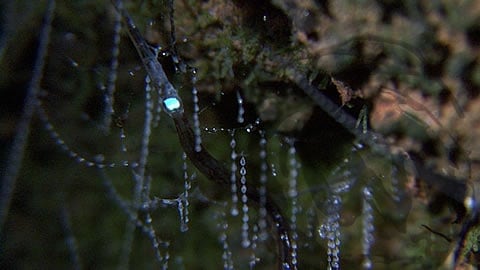 While the slimy presence of the Australian glow-wormArachnocampa flavamay not be on everyones fascinating list of things to observe in the tropics at night.

It is fascinating to know, that the natural entrapment by its blue green emitting light, encircled by the sticky crystal like dew drops, proves to be deadly to nocturnal flying insects.

The extreme adhesive properties of this viscous substance, is according to CSIRO (Commonwealth Scientific and Industrial Research Organisation), ‘insolubleonce it dries, ‘no current available solvent is capable of dissolving’ this highly viscousmucilage.

Remarkably the glow-worm manages to slide effortlessly, eating and regurgitating its mesmerising sticky snares, while making a meal of those that finally see “the light at the end of the tunnel”.

Thanks to Wildcam Australia to show us this facinating clip regarding the Glow Worm.

Thanks, really appreciate the feedback.
cheer’s