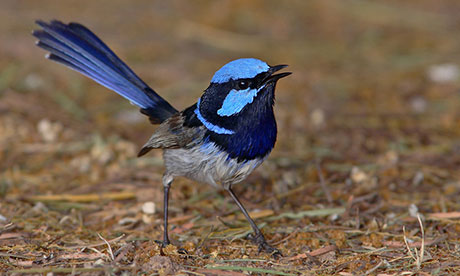 It’s bright blue, sexually promiscuous and just 14cm long – and it’s officially Australia’s favourite bird. The superb fairy-wren has won a national poll to identify the country’s most-loved feathered animal. BirdLife Australia said the vote, a part of Bird Week 2013, was a “very close race” for top spot between the fairy-wren and that lover of all things shiny, the magpie.

The hooded plover took third position, ahead of the laughing kookaburra. Other birds in the top 10, which was decided by votes from more than 8,000 people, include the willie wagtail, the rainbow lorikeet and the galah.

The superb fairy-wren is found throughout south-east Australia. The males of the species, which are coloured a vibrant blue, have been dubbed the “least faithful birds in the world” owing to their rampant promiscuity. Female birds have been observed being courted by 13 males in a half-hour period.

Sean Dooley, the editor of BirdLife Australia’s magazine, said the fairy-wren triumphed because of its combination of good looks and regular appearances in back yards in New South Wales, Queensland and Tasmania.

Celebrities including Julia Zemiro and Dave Hughes campaigned for their favourite species, to coincide with Bird Week.

This article was written by Oliver Milman for the Guardian.