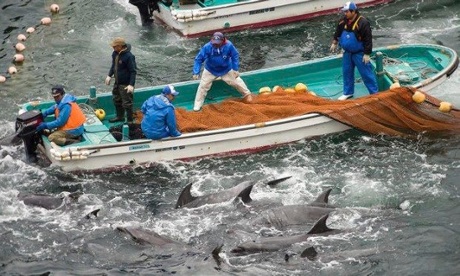 Fishermen in Japan began slaughtering hundreds of bottlenose dolphins early on Tuesday morning, campaigners said, despite mounting international calls for the animals to be spared.

Members of the marine conservation group Sea Shepherd who are monitoring the annual cull in Taiji, on Japan’s Pacific coast, said local fishermen had started killing an estimated 250 dolphins just before 7.30am.

The animals were last week corralled in a cove in the town, which drew international attention in 2009 with the release of the Oscar-winning documentary The Cove.

More than 50 of the mammals, including a rare albino calf, were selected and removed from the pod for sale to aquariums and water parks. Together they are expected to fetch millions of dollars.

The rest are being slaughtered for their meat, a delicacy that most Japanese shun but which still forms part of the diet in Taiji and other whaling towns.

“These dolphins are wrangled and wrestled into the killing cove, where they’ve sustained multiple injuries. Dolphin killers deliberately run over the pod with skiffs, they wrestle them, man-handled them into captive nets before even being slaughtered,” Melissa Sehgal, a Sea Shepherd activist, told Reuters.

The methods used to capture and kill the dolphins have attracted widespread condemnation. Fishermen bang metal poles together beneath the water to confuse the animals’ hypersensitive sonar before herding them into shallow water, where they are left for up to several days before being taken to the cove to be slaughtered.

Hidden from view beneath tarpaulin covers, the fishermen drive metal rods into the dolphins’ spinal cords and leave them to die. “It takes up to 20 to 30 minutes for these dolphins to die, where they bleed out, suffocate or drown in the process of being dragged to the butcher house,” Sehgal said.

They are then taken by boat to a quayside warehouse to be cut up into slabs of meat.

“It is reprehensible that the Taiji dolphin hunters are killing dolphins for human consumption, because all dolphin meat is toxic – up to 5,000 times more toxic than allowed by the World Health Organisation,” The Cove’s director, Louie Psihoyos, told the Guardian.

“The hunters claim they are poor and need the meat to feed their families, but who would feed poison to their children and parents? The dolphin hunters make up to US$200,000 for each captive dolphin so they are anything but poor. They also claim they are family men, but they have just massacred a whole pod full of families.”

The Sea Shepherd activists in Taiji, who call themselves the Cove Guardians, said dozens of animals had been killed by mid-morning, adding that the sea has turned a deep shade of red. “Water of the cove continues to run red with the blood of innocent bottlenose dolphins who have been murdered,” they wrote.

In a rare public intervention by a US official, Washington’s ambassador to Tokyo, Caroline Kennedy, expressed “deep concern” over the dolphin hunt.

Kennedy tweeted on Saturday: “Deeply concerned by inhumaneness of drive hunt dolphin killing.” She said the US government opposed the practice.

In an open letter to the people of Taiji released Monday, the Japanese artist and peace campaigner Yoko Ono called for an end to the cull. “I understand how you must feel about the one-sidedness of the west to be angry at your traditional capture and slaughter of dolphins,” she wrote.

But, Ono added, the slaughter was harming Japan’s international reputation and gave countries such as China and Russia an excuse to “speak ill of Japan”. She wrote: “The future of Japan and its safety depends on many situations, but what you do with dolphins now can create a very bad relationship with the whole world.”

On Monday, Japan’s chief cabinet secretary defended the hunt. “I believe dolphin fishing is one of Japan’s traditional fishing industries and is carried out appropriately in accordance to the law,” Suga told reporters when asked about Kennedy’s comments.

“Furthermore, dolphins are not within the management of the International Whaling Commission and it is left to the respective nations to manage this resource.

“We will explain Japan’s position to the American side.”

Japanese officials point out that there is no international ban on killing bottlenose dolphins and that the animals are not endangered. Fishermen in Taiji, meanwhile, say the hunt provides a crucial source of income and helps maintain fish stocks in the area.

Taiji is regarded as the spiritual home of Japan’s coastal whaling industry. The first hunts took place in the early 1600s, according to the town’s whaling museum, but the industry went into decline after the introduction of a global ban on commercial whaling in 1986. Dolphins and other small cetaceans are not covered by the ban.

But activists questioned Taiji’s claims that dolphin hunting is an important part of the town’s history. “This claim of ‘Japanese tradition’ is nonsense,” said Ric O’Barry, a former dolphin trainer who is now director of Earth Island’s dolphin project. “The dolphin drive hunts, according to the town’s own written history, says a couple of drive hunts occurred in 1936 and 1944, but the current series of hunts only began in 1969.

O’Barry said fishermen were killing dolphins for profit under the guise of cultural tradition. “What is going on here?” he said. “The dolphin hunts are being used by the captivity industry to supply wild dolphins to aquariums in Japan, China, Dubai, and other aquariums all around the world.”

Between September and early spring, Japan is permitted to catch up to 20,000 small cetaceans, including pilot whales and porpoises. The meat from a single bottlenose fetches around 50,000 yen, but aquariums and water parks are prepared to pay much more for live specimens.

Sea Shepherd says 176 marine mammals have been killed so far this season, including bottlenose, spotted, striped and risso’s dolphins.

This article was written by Justin McCurry for the Guardian.

I could not find the Scotswoman Lewendon's petition on oceana.org urging the Olympic Committee not to allow Japan to host the 2020 olympics, unless they stop the Taiji slaughter of dolphins. I feel this is a very important petition and should somehow be given a priority address, such as the petitionsite.org or change.org so we could all petition for this. It is a huge lever to get Japan to stop this horrendous murder of dolphins.

Killing these mammmals for fertiliser and mercury tainted meat! These people are so heartelss and have no honour as commit such barbaric atrocites on these highly intelligent mammals! Shameful & evil!

its barbaric and cruel just stop it all, its their ocean not ours why do we as humans have to kill anything thts so beautiful, just makes me cry, we have made this earth a killing field,

Morons, barbaric to allow this to continue! Karma – it is coming…Un educated,

We keep doing everything to ensure our global demise…

We need to do something to try to stop this! act now!

stop and end this bloody slaughter for dolphins immediately . don't hurt dolphins again , they have right to alive in the ocean . thanks