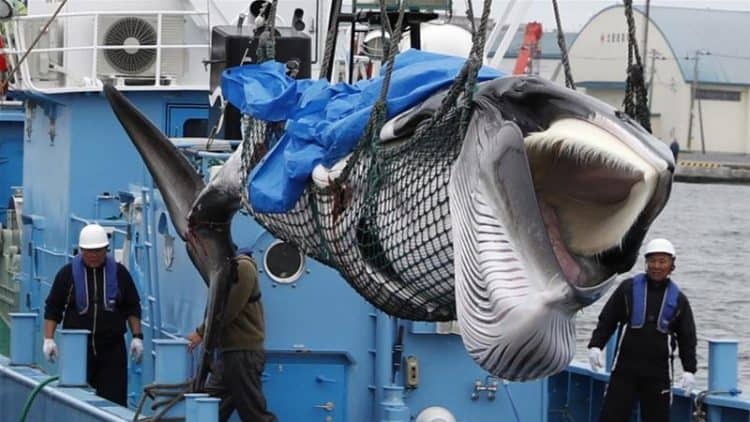 Two Japanese whale hunting boats have returned to port with their first catch after resuming commercial whaling for the first time in 31 years.

As a fleet of five boats left port early on Monday, whalers, their families and local officials in two major whaling towns, Shimonoseki in southwestern Japan and Kushiro in the north, celebrated the fresh start, hoping for their safe return and a good catch.

Two minke whales were brought back to Kushiro later on Monday.

A crane lifted them and slowly placed them on the back of a truck to be taken to a portside factory for processing.

Workers in blue plastic overalls poured sake from paper cups onto the first whale to express thanks and celebrate the first catch.

Fisheries Agency officials said the whale meat would be auctioned at a local fish market on Thursday and later hit stores, mainly in the region but possibly in Tokyo.

“We hope commercial whaling will be on track as soon as possible, contribute to local prosperity and carry on Japan’s rich whale culture to the next generation,” Deputy Chief Cabinet Secretary Yasutoshi Nishimura told reporters in Tokyo.

The Fisheries Agency said the hunts will stay within the country’s exclusive economic zone, and the catch quota for the rest of this year will be 227 whales including minkes, sei whales and Bryde’s whales, fewer than the 637 that Japan hunted in the Antarctic and the northwestern Pacific in its research programme in recent years.

Whalers are hoping for a special price for the historic meat that is higher than the average 2,000 yen ($18) per kg that their counterparts from Antarctic research whaling used to get.

The announcement of the quota, originally planned for late June, was delayed until Monday in an apparent move to avoid criticism during this past weekend’s Group of 20 summit in Osaka.

Monday marked the first commercial hunt since 1988 when Japan switched to what it called research whaling after commercial whaling was banned by the International Whaling Commission (IWC).

Japan gave six months’ notice that it was withdrawing from the IWC, a move that took effect on Sunday.

While the resumption of commercial whaling was condemned by many conservation groups, others see it as a face-saving way to let the government’s embattled and expensive whaling programme gradually succumb to changing times and tastes.

“This is a sad day for whale protection globally,” said Nicola Beynon of Humane Society International.

“The word ‘research’ may have been removed from the side of the factory ship, finally ending Japan’s charade of harpooning whales under the guise of science, but these magnificent creatures will still be slaughtered for no legitimate reason,” Beynon, based in Australia, said in a statement.

Patrick Ramage, head of the International Fund for Animal Welfare, called the move a face-saving solution that could eventually lead Japan to abandon whaling.

Despite massive attention, tax money and political support from ruling party legislators, whaling in Japan involved only a few hundred people and accounted for less than 0.1 percent of the total meat consumption in the fiscal year of 2017, according to government data.

Whale meat was an affordable source of protein during the lean times after World War II, with annual consumption peaking at 223,000 tonnes in 1962. But whale was quickly replaced by other meats.

The supply of whale meat fell to 6,000 tonnes in 1986, the year before the moratorium on commercial whaling imposed by the IWC banned the hunting of several whale species.

Under its research whaling, which was criticised as a cover for commercial hunts because the meat was sold on the market, Japan caught as many as 1,200 whales a year.

It drastically cut back its catch in recent years after international protests escalated and whale meat consumption slumped at home.

Today, about 4,000-5,000 tonnes are supplied in Japan annually, or 30-40 grammes of whale meat per person a year, Fisheries Agency officials say.

This article was first published by Aljazeera.com on 2 July 2019.

Take direct action to protect whales and dolphins by donating as little as $1 to our “Fighting for Wildlife” crowdfunding initiative.

Focusing on Wildlife supports approved wildlife conservation organizations, which spend at least 80 percent of the money they raise on actual fieldwork, rather than administration and fundraising. When making a donation you can designate for which type of initiative it should be used – wildlife, oceans, forests or climate.

Hope they choke on it.

so the research lie is done with

so the research lie is done with

So cruel what next

So fucking cruel what next